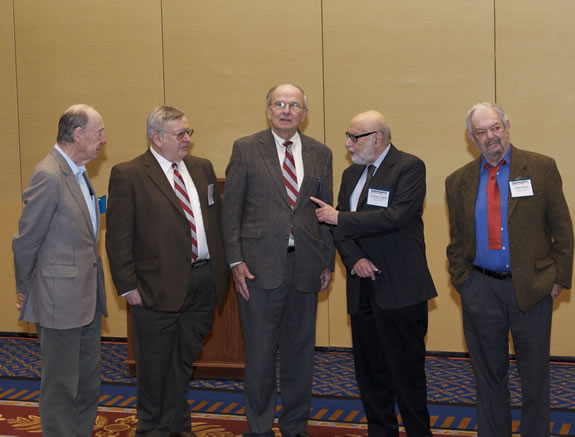 At the 2010 "April" meeting, the J. J. Sakurai Prize for Theoretical Particle Physics was presented to six recipients, for their work, done some 46 years ago, on spontaneous symmetry breaking in gauge theories.

The mechanism they discovered is an essential ingredient in the unification of the weak and electromagnetic interactions that forms part of the standard model of particle physics.

In the picture are five of the six recipients. They are (l to r): T. W. B. Kibble, Gerald S. Guralnik, Carl R. Hagen, François Englert, and Robert Brout. The sixth recipient, Peter Higgs, was unable to attend the meeting.

The prize ceremony, the prize session and the associated press conference can be viewed on YouTube (search on "Sakurai Prize".)