Video Contest Reaches Out with Lasers 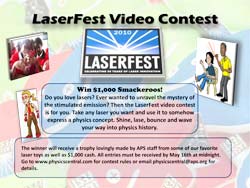 To help celebrate the laser’s fiftieth anniversary, APS’s outreach department is holding a video contest with a $1,000 grand prize for the winning video. The contest, run through the APS outreach website PhysicsCentral, is aimed at a wide variety of people who are interested in physics and science.

“We really want to make sure we’re engaging the public and not just informing them,” said Becky Thompson, APS’s head of public outreach. “With a video contest we can get a whole range of people to participate.”

This year’s video contest is laser- themed in conjunction with LaserFest, the yearlong celebration of the fiftieth anniversary of the invention of the laser. Modeled after previous years’ successful Nanobowl and ToyBox Physics contests, the LaserFest video contest invites contestants to create videos that use lasers in some way to highlight a physics concept. The idea is not necessarily to demonstrate how a laser works or show off the physics of lasers, but just to incorporate lasers and physics together into the video. The contest organizers have intentionally left directions about the content of the videos open-ended to foster as much creativity in submissions as possible.

“One of the neat things about the video contest is that we leave it vague,” Thompson said. “I don’t know exactly what I’m expecting, and I kind of like that.”

Last year’s ToyBox Physics contest invited participants to create a video that shows some concept of physics with toys. Demonstrating physics using football was the theme in 2008, the first year the contest was held. Past winners can still be found on the Physics Central and YouTube.

The organizers aim to have each video be about two minutes in length and somehow use lasers to demonstrate a physics concept. The contest is open to anyone who wants to participate. Previous contestants have ranged from elementary school students to national laboratories. To enter, contestants must post their videos to YouTube with the word “LaserFest” somewhere in the title, and send an email with “LaserFest Video” in the subject line to PhysicsCentral.

The grand prize winner, chosen by a panel of APS staff involved in public outreach and engagement, will receive a trophy made from laser toys and $1,000. Visitors to the PhysicsCentral website will be able to vote for the people’s choice award winner starting on May 24th. The winners of both awards will be announced on May 31st.

The deadline for submissions is May 16th, 2010, the actual date that marks the fiftieth anniversary of the first successful demonstration of a laser.