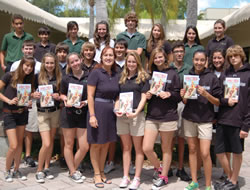 Winning LaserFest Contest Videos
May ended with a flurry of activity around APS’s outreach department, as winners were announced for the LaserFest Video Contest and the yearly PhysicsQuest classroom competition.

LaserFest Video Contest
For the last three years, APS has sponsored a video contest aimed at getting the general public excited about and involved with physics. This year, the guidelines, which specified a short video that features lasers in some way, were intentionally simple to allow contestants be as creative with the videos as possible.

For the first time, when deciding the grand prize winner, the judges were split between two videos. They opted to award both videos the grand prize, which includes $1,000 cash, a handmade trophy, a SpectraSound kit, and a book chronicling the history of the laser.

Stephen Boyd is no stranger to entering video competitions. In 2009, he entered his first one for Bicycling Magazine’s “Win Any Bike” contest and walked away with a Cervélo S4 road bike. Since then he figures he’s entered at least 25 other video contests at sites around the Internet.

“I make a lot of videos for video contests but this is one of the most fun ones I’ve done because I got to learn stuff,” Boyd said.

Boyd’s video, titled “Lasers are Crazy,” features him and his friend Derek Tulowitzky dancing and rapping about how lasers work. Boyd is a senior at Ball State University in Muncie Indiana, studying actuarial science. Though not a physics major, Boyd was able to draw on his freshman year class on the physics of optics as well as on friends studying physics to help with the science.

He said that he has been making music all of his life and used to be in a band that went on tour. Now he mostly records electronic music, though he’s been playing drums for nine years, and also dabbles with keyboard and synthesizers. Boyd recorded all of the original music for the video using his own equipment.

With the prize money, Boyd said that he would likely use it over the summer when he and his friends are planning a bicycle tour from Muncie to Bar Harbor Maine.

Cory Stinson’s winning video “Interference; A True Story Dance Using HeNe Lasers” had a unique take on the physics video contest. Instead of describing the physics of lasers, the laser spots themselves become the main characters of a love story. In the video, two spots encounter each other and dance together, creating interference patterns while Frank Sinatra croons “Strangers in the Night.”

“The inspiration came from one of the demos that we do in the freshman physics classes at the University. We show them interference between the two laser beams,” Stinson said, “Its’ just something that not a lot of people see or wouldn’t expect to see from a laser beam.”

Stinson is a physics graduate student specializing in optics and lasers at San Diego State University in California. He and his professor, Dr. Matt Anderson, worked together to come up with the idea for the video. The two filmed the interacting lasers, and spent about ten hours over the next three days editing the film together.

Stinson began editing videos long before LaserFest started. While an undergraduate at the University of North Texas, he helped update the multimedia content of the school’s planetarium when it switched to color projectors. He also placed second in San Diego State’s “Aztec for Life” video competition. With the prize money, Stinson hopes to invest in a new professional quality camera.

PhysicsQuest Competition
This year’s winner of the PhysicsQuest competition is Enmarie Dewitt’s eighth grade physical science class of the Westminster Christian School in Palmetto Bay Florida. The class correctly found the answers to all four physics problems included in the kits. Each student won an iPod Nano, and the class as a whole received a 500 dollar gift certificate to Educational Innovations, the manufacturer of the kits.

PhysicsQuest is an interactive kit that APS sends out to over 3,000 teachers across the country each year. The kit contains four physics experiments for students to perform. After the class completes the activities, they submit their answers to the PhysicsCentral website to be entered into the grand prize drawing.

“They learn so much about different physics concepts, and it has been a real positive experience with physics,” DeWitt said, “At the end of the four labs, they wanted to know more and do more physics. It really piques their interest and curiosity into physics.”

This year’s kits featured the physics of lasers and optics to correspond with LaserFest, the celebration of the 50th anniversary of the laser. The experiments included using a laser to measure the width of a human hair, testing the energy levels of a laser with a glow-in-the-dark square, measuring the wavelength of a laser using a diffraction grating, and shining lasers through polarizers. Dewitt said that her favorite was finding the width of a human hair and that her students really enjoyed testing the energy levels of lasers as well.