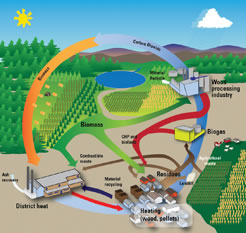 
A schematic view of energy generation from the Bioenergy Innovation Center.

Norway is unique in terms of electricity production. Almost 100% is provided by hydroelectricity. A growing population and increased consumption demand new electricity generation capacity in addition to extending the electricity distribution grid both internally as well as to other nations, primarily to Sweden, Denmark, Germany and the Netherlands.

Grid extensions are important for balancing the electricity generation between the different producers and for having a more secure supply. However, it does not add to the overall production capacity. Since 1995 essentially no significant new electricity power generation capacity has been added, although a couple of gas-fired power plants have been constructed. For a period the price of natural gas was too high to make them economically profitable so they were standing idle. After the introduction of shale gas, the price of gas has come down and they are providing electricity to the grid.

The Norwegian government has engaged in developing new renewable energy production and new, large scale technologies for CO2 capture. The initiatives are at several levels; direct support for new generation capacity like wind energy, adding of thermal energy production based on biomass and solid municipal waste in order to replace heating using electricity and oil, and supporting research into renewables and CO2 capture.

The research takes place at the major Norwegian universities and research institutes. The latter are independent, non-profit organizations, which have to generate the majority of their income from contract research either with industry and/or the Norwegian research council. During the last decades EU funding through different framework programs constituted a significant source for several institutes.

In 2009, after a peer review process, eight Centers for Environment-friendly Energy Research (CEER) were established. These centers get significant base funding from the research council, but they are also expected to find additional funding for their research.

The objective for these Centers for Environment-friendly Energy Research is to focus the research within a selected field. It is expected that the research will have a high scientific merit and also include collaboration with foreign research groups, thus fostering the possibility of achieving significant advances in the selected field. Each center is planned to last for an eight year period.

The two centers on offshore wind energy, NORCOWE and NOWITECH, complement each other, and together they cover studies of wind and ocean conditions, new offshore wind technology as well as deployment and operation of wind energy farms.

Norway is often referred to as a country with expertise in CO2 capture and storage (CCS). This is due to the experience with the Sleipner offshore gas field where CO2 is separated from the produced gas and reinjected into the reservoir. It is therefore no surprise that among the eight centers two of them, BIGCCS and SUCCESS, will be working on CCS. These centers cover the value chain from CO2 capture from power generation, transport of CO2 and CO2storage.

The metallurgical industry has been strong in Norway since the introduction of hydroelectric power. This tradition and competence has been used to produce solar cell grade silicon and has made Norway a significant player in that field. The Norwegian Research Center for Solar Cell Technology continues this tradition and aims at further developing mono- and multi-crystalline silicon solar technology, including processes for silicon crystallization.

Based on solid biomass, the Bioenergy Innovation Center (CenBio), looks at the biomass supply, logistics in harvesting and utilization, and conversion technologies in addition to heat and possibly electricity generation. The use of biomass for district heating is common throughout Scandinavia.

Besides these centers, there are also research and development activities on other forms of renewable energy technologies. The national power utility, Statkraft, has built an osmotic power pilot plant. It has however, a long way to go before this technology is even close to getting into the market.

Closer to being commercialized, but still into the future, are tidal power plants. They are essentially submerged wind turbines that generate power from strong tidal currents.

Last, but not least, are the initiatives on generating power from ocean wave action. Several concepts are being considered.

Jon Samseth is a professor of physics affiliated with SINTEF, NTNU (Norwegian University of Science and Technology) and Akershus University College. He is the current vice president of SCOPE and has served on the IUPAP energy working group and is member of the EPS energy group.