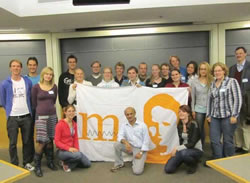 During their visit to MIT, the students pose with Professor Jagadeesh Moodera (center).

There was an almost infinite number of little lights that shone through the airplane window as we reached the other end of the Atlantic. We, being a group of nineteen Dutch (astro)physics undergraduates of the Radboud University Nijmegen, were ready to start our two-week study tour in the United States.

There is a long tradition of study tours. Other students of our student association, Marie Curie, have been to countries like Japan, South Africa and Russia. Last fall it was our turn to discover New York, Boston and Chicago, with their prestigious universities and high-facility labs.

It instantly struck us that there are some major differences with our own little country. The cities, the buildings, the cars, the streets, the sodas and even the squirrels were bigger than we are used to. In the Netherlands, we almost never see squirrels, as they are just too timid. In America they ate out of our hands. What we noticed most about the food was that it is all much sweeter, especially the bread and the sodas. A small disappointment was the fact that one has to be 21 to drink in the US. We were not even allowed to enter a bar for a coke. A pleasant surprise was the presence of a Chinatown in all the cities we visited. In the Netherlands, this is not usual. Also, the spoken American language is–like–totally different from the English we learned in high school and it is–like–exactly like in the Hollywood movies.

The universities in the US have very much in common with ours: the way that they are organized, the labs, the humor of the professors, it was all quite familiar to us. However, there are a few differences that are worth mentioning. The campus of a Dutch university is quite small; one easily walks from one side to the other in less than fifteen minutes. In the US, one needs to take the bus. The buildings are built much further apart than in the Netherlands, creating a lot of space for sports fields and nice parks. Another interesting difference is found in the cafeteria. In Holland, you can have a sandwich, some salad or soup for lunch. On our trip, we saw a completely new concept: several cafeterias were host to fast-food branches. Fries and burgers for lunch on campus! Furthermore, we noticed that all institutes and universities are very internationally oriented, which we liked a lot. Our own university is also improving in this field, but it is not yet as far as its American counterparts.

New York City
Our tour started in New York. The first thing we did was pay a visit to Lady Liberty, because you cannot say you have seen New York without having seen her. After all, we are tourists. We took far too many pictures, and sailed on to Ellis Island. It was quite impressive to see that a lot of ancestors of American families have fairly recently (by European standards) entered the US through this island. For the remaining part of our spare time in New York we walked around in small groups, visiting famous buildings such as the Empire State Building. It was an amazing feeling to stand on the extremely busy Times Square, watching the typical yellow cabs passing by. We were astonished by the appearance of a three-storied M&M store: something like that can only exist in the USA. We also went to Central Park for a quiet walk. Well, that is what it was supposed to be. Apparently, going to Central Park without jogging equipment is a bad idea if one does not want to be knocked off one’s feet.

During our stay in New York, we visited Princeton, Rutgers, Stony Brook and the astrophysics department hosted at the National Museum of Natural History. All of these visits were wonderful, but since we cannot discuss them all, we would like to share some of our experiences at Princeton and Stony Brook in more detail.
In Princeton, Professor Annabella Selloni showed us around on the campus. We saw huge microscopes at the Imaging and Analysis Center, and we were even allowed to play with an expensive electron microscope. Furthermore, we had to wear funny clean suits in the Micro/Nano Fabrication Laboratory. In the afternoon, we learned about fusion and plasma in the Princeton Plasma Physics Laboratory.

Our visit to Stony Brook was organized by Distinguished Professor Peter van Nieuwenhuizen. We were given as many as eight talks by some of the finest speakers of the physics department. For instance, Prof. Chang Kee Jung explained all about neutrinos: what they are, where they come from, how we could detect them and in what way they might be the key to solving some of the mysteries surrounding fundamental physics today. He managed to make us all very enthusiastic for neutrino-research, so this was an excellent preparation for our visit to Fermilab later that week. Another talk was given by Prof. Martin Rocek. He gave us an introduction to string theory, which was a very welcome subject, as it is not a hot topic in Nijmegen.

Boston
We arrived in Boston late at night. Nevertheless, the train to our hostel was packed. It turned out that we were staying in the local party-district and there was no reason not to use this happy coincidence to see if college parties are as awesome as they seem in the movies. They are.

The city itself is beautiful. On our day off, we walked the so-called “freedom trail,’’ read things about some party that involved angry people and tea, explored the parks and had dinner in Chinatown.

At MIT we visited the Francis Bitter Magnet Laboratory, where Professor Jagadeesh Moodera showed us the research he and his group are doing. It was a very exiting visit: next to various interesting talks, we were allowed to try to make our own graphene using the scotch tape method, and we watched helium turn into a superfluid. The enthusiasm came from both sides, resulting in not only a wonderful day, but also a lot of group pictures to remember it.

Studying physics in Nijmegen means participating in both physics and astrophysics courses in the first year. This wide range of interest was reflected in our program during the trip. So at Harvard, the focus was on astrophysics. At the Harvard-Smithsonian Center for Astrophysics (CfA) Dr. Jonathan McDowell showed us among other things the control room of the Chandra X-ray satellite and told us about the work done in the CfA and of Chandra in particular. Another person telling about her work for the CfA was graduate student Sarah Ballard. She enthusiastically explained to us what methods are used to detect exoplanets and surprised us with the fact that Gliese 581g has a very active twitter account.

Chicago
Chicago turned out to be as windy as its nickname claims it to be. We visited the impressive Skydeck, looked at a deformed reflection of the skyline in the big shiny blob [i.e., Anish Kapoor’s sculpture “Cloud Gate” in Millennium Park (Ed.)] and saw the first signs of Halloween. Also, some people in our group went to the Art Institute of Chicago. The best parts were the French impressionism and modern European sections.

One of the most fascinating things we visited during our trip to the Fermilab were the MINOS (Main Injector Neutrino Oscillation Search) Areas. These are part of the NuMI Facility, a beam facility which creates a beam of muon neutrino particles. We went down a hundred meters with an elevator to see the detector. Aria Soha showed us the several experiments that are going on now. We also saw MINERvA (another experiment using the neutrino beam) and set-ups of some dark matter experiments.

Our last stop was Argonne. Dave Hooper, wearing a huge number of security name tags, gave our group a tour around the entire terrain, which is quite large. Firstly, we saw ATLAS and the numerous projects it hosts. Prof. Michel van Veenendaal told us about the Advanced Photon Source. We even got to go up to his office where we had a fantastic view over the synchrotron. In the afternoon we went to see a laser lab and a new type of particle accelerator. The day ended with a nice story about the herd of white deer living on the terrain.

All in all it was a very interesting and educational tour. We experienced the American culture, which was pretty awesome. We have been to some great institutes and universities where we saw famous experiments and learned a lot. We saw various possibilities to work and study abroad in the field of physics and it was a nice experience to see the theories we learn in practice. When given the chance, we would certainly do it again!