He discovered a universal property of dissolved molecules and showed how to use it. 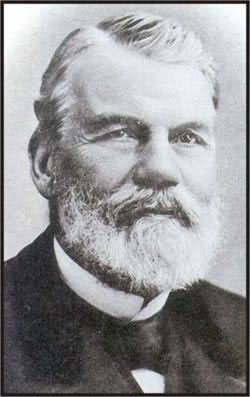 Full acceptance of the atomic-molecular theory of matter depended on the ability to relate familiar macroscopic properties to the properties of individual molecules. This began to happen when Amedeo Avogadro proposed that, under similar conditions, all gases contain the same number of molecules per unit volume. Building on this foundation, the Ideal Gas Theory initiated a flowering of activity and understanding in physics. In the ideal gas, molecules of any kind behave the same way. The universality embodied in this concept shows that there is underlying physics that covers a broad range of matter. Eventually, physicists found ways to determine the magnitude of Avogadro’s Constant, the actual number of molecules in a given volume. Molecular weights could then be determined simply by measuring the density of a gas.

But the understanding of gases did little to advance our understanding of liquids, solutions and condensed matter. Most molecules cannot easily be observed as gases. But, dissolved in a liquid, their aggregate behavior can be observed, as in the Ideal Gas Theory. How to do this awaited the work of the French scientist, François Marie Raoult.

Raoult’s Law
After years of careful experiments, he published a landmark article, “General Law of the Vapor Pressure of Solvents,” in the French Journal, Comptes Rendus (May 23, 1887). It contains the core idea of what is now recognized as Raoult’s Law. He dissolved low concentrations of different non-volatile compounds: five kinds in water and 14 kinds in 11 organic solvents. He then measured the effect of the dissolved compounds on the vapor pressure of the solvent. He found the remarkable result that, within the range of his experiments, the presence of a given mole fraction of any dissolved substance in any liquid caused the same fractional reduction in the vapor pressure. Later confirmed by others, these experiments provided the kind of universality that Avogadro and the architects of the Ideal Gas Theory gave to the physics of their time. In other work, Raoult showed a similar effect for the reduction of the melting point of a liquid by dissolved substances. Subsequent theoretical work by Jacobus van’t Hoff and Svante Arrhenius, confirmed Raoult’s result, provided the thermodynamic basis and showed how to understand what, at first, seemed to be exceptions.

Both Raoult’s Law and the Ideal Gas Law apply only within a restricted range of conditions. For the gas law this means relatively high temperatures and low pressures. At higher pressures and lower temperatures, the Ideal Gas Law no longer applies. Different gases behave differently, often following the Van der Waals equation, with eventual condensation to liquid. A rich new physics was discovered by going beyond the conditions that led to the original law. Raoult’s Law applies at limiting low concentrations for non-volatile solutes. At higher concentrations or with volatile solutes, different compounds behave differently. Exploring these conditions provides abundant data, the basis for fractional distillation and other industrial processes. Also, for several salts, such as sodium chloride in water, Raoult found about twice the expected number of molecules. This was an early clue that sodium chloride in water dissociates to sodium and chloride ions.

The Early Years
Raoult [1830-1901] was born in Fournes in the departement du Nord, son of a customs agent. He spent a brief period at the University of Paris, but lacked financial resources to continue. He then spent 14 years teaching physics and mathematics in several high schools. He worked full time teaching, moving from one school to another. At the same time, on his own, at considerable hardship, he continued research on the energy relations in voltaic cells. This led to the docteur ès sciences physiques degree from the University of Paris. Though little noticed at the time, it was pioneering work. He was one of the first to show that the energy of the chemical reaction and the electrical energy of a voltaic cell were not identical. Recognition of the work would come only later when thermodynamic concepts of free energy and entropy were understood as they applied to electrochemical cells.

Finally, in 1867, he came to the Sciences Faculty in Grenoble to become professor of chemistry. There was some objection that he was really a physicist, but the appointment was finally approved, and he continued his research in Grenoble for 31 years. The lab at the time was plain and simple. In her book, Science in the Provinces, historian Mary Jo Nye quotes Raoult’s description: “Each professor possessed his own little table. This room, which was a laboratory during the daytime, served simultaneously as the living quarters for the concierge. Here the physics professor arranged his instruments; the zoology professor dissected his rabbits and fed his pigeons; ...the geology professor laid out his fossils;...and the chemistry professor carried out all his operations.”

Raoult’s Legacy
His life was one long struggle to do the work he loved and to see its merits recognized. He endured financial hardship completing his doctorate, as well as an extended apprenticeship of high school teaching and the  reluctant department post at Grenoble. But ultimately, he received the recognition he deserved, first in other countries, finally in France.

Ed. Note: This column has been contributed by guest writer Richard Williams.