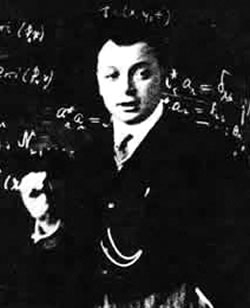 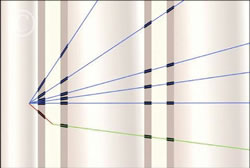 A tau neutrino event as recorded by DONUT

“Neutrinos, they are very small/ They have no charge and have no mass/ And do not interact at all,” John Updike wrote in his 1960 poem, “Cosmic Gall.” Neutrinos were a fairly recent discovery then, and within two years physicists would discover that they were only just beginning to understand this mysterious “ghost particle.” For instance, there was more than one kind of neutrino, and it would take physicists another 40 years to find them all.

Wolfgang Pauli first proposed the existence of neutrinos in 1930 while investigating the conundrum of radioactive beta decay, in which some of the original energy appeared to be missing after an electron was emitted from an atomic nucleus. He hypothesized that in order to abide by the laws of energy conservation, another, as-yet-undetected neutral particle might also be emitted, accounting for the missing energy.

Pauli was reluctant to publish a paper on this unusual hypothesis, but he penned a letter to a group of prominent nuclear physicists gathering for a conference in Tuebingen, Germany in December asking for input regarding means of detecting such a particle experimentally. “I have done something very bad today by proposing a particle that cannot be detected; it is something no theorist should ever do,” he wrote, describing his idea as “a desperate remedy.”

Among the physicists who took Pauli’s idea seriously was Enrico Fermi, who developed the theory of beta decay further in 1934, coining the name “neutrino” (“little neutral one”) in the process. It became clear that if such a particle existed, it must be both very light–less than 1% the mass of a proton–and interact very weakly with matter, making it very difficult to detect. But in 1956, Clyde Cowan and Frederick Reines succeeded in doing just that, sending a telegram to Pauli informing him of their discovery. “Thanks for message,” Pauli telegrammed back. “Everything comes to him who knows how to wait.”

Pauli died two and a half years later, and thus missed the discovery in 1962 of a second type of neutrino, dubbed the muon neutrino, corresponding to the charged muon lepton. (The latter caused I.I. Rabi to famously exclaim, “Who ordered that?”) In 1975, a third charged lepton, tau, was discovered, and subsequent experiments hinted strongly that there should also be a third kind of neutrino. While scientists at CERN uncovered further proof in 1989 of the tau neutrino’s existence, it would be 25 years from the discovery of the tau before the technology was available to actually detect its neutrino directly.

In the 1990s, Fermilab designed the DONUT (Direct Observation of the NU Tau) experiment to search specifically for tau neutrino interactions. The scientists used the Tevatron to produce an intense neutrino beam, predicting it would contain at least some tau neutrinos. After deploying an elaborate system of magnets and iron and concrete to eliminate as many background particles as possible, the beam was fired at a three-foot-long fixed target: iron plates alternating with layers of a special emulsion sandwiched between them.

Those emulsions captured the tracks of any electrically charged particles produced by the extremely rare (about one in one million million) tau neutrino interactions, which were then electronically recorded by scintillators. The emulsions were then photographically developed so that scientists could analyze the data, looking for the telltale distinctive short track with a kink that indicates a tau lepton, the result of a tau neutrino interacting with an atomic nucleus. They were literally connecting the dots: small black dots left by particles passing through, which could then be connected to retrace the particles’ paths.

After the experimental run in 1997, it took three years of painstaking analysis to sift through all the data, winnowing some six million signatures down to 1000 candidate events. On July 21, 2000, scientists from the DONUT collaboration announced they had identified four tau neutrino signatures demonstrating an interaction with an atomic nucleus. The experiment also validated a number of new techniques for neutrino detection, most notably the emulsion cloud chamber, which significantly increased the number of observed neutrino interactions.

Leon Lederman, who had shared the 1988 Nobel Prize in Physics with Jack Steinberger and Melvin Schwartz for the discovery of the muon neutrino, called the achievement “an important and long-awaited result. Important because there is a huge effort underway to study the connections among neutrinos, and long-awaited because the tau lepton was discovered 25 years ago and it is high time the other shoe was dropped.”

Among the questions physicists were still pursuing was whether neutrinos might have a tiny bit of mass, and whether they could oscillate and change flavors over time as they traveled through space. For instance, would it be possible for a muon neutrino to change into a tau neutrino via oscillation?

That question was answered with a resounding yes in 2010. Scientists with the OPERA experiment at Gran Sasso National Laboratory in Italy reported that they had found four instances of the telltale signature of the tau neutrino among a stream of billions of muon neutrinos generated at nearby CERN–the first direct observation of a neutrino transforming from one type into another. Experiments are ongoing to further explore this phenomenon and possibly determine specific masses for neutrinos.

With the discovery of the tau neutrino, only one more particle remains to be found to complete the Standard Model of Particle Physics: the elusive Higgs boson. Fermilab’s soon-to-be-retired Tevatron is racing against the clock, competing with the Large Hadron Collider at CERN, to make one more significant discovery that will herald the dawn of a new era in particle physics.

This article was published in the July 2011 issue of APS News.