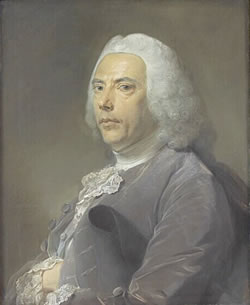 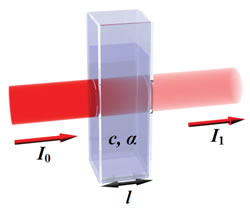 Diagram illustrating absorption of light according to the Bouguer-Lambert law.

Photometry is a staple of astronomical techniques, particularly when determining the luminosity of certain celestial objects, such as variable stars, minor planets, active galactic nuclei, and supernovae. The so-called “father of photometry” was Pierre Bouguer, an 18th century French mathematician, astronomer and geophysicist, who made some of the earliest recorded measurements in photometry.

Bouguer’s father was Jean Bouguer, a well-known hydrographer who authored a seminal treatise on navigation. Pierre was born in 1698, and it soon became apparent that he not only inherited his father’s scientific gifts, but also was a bit of a prodigy. He had attained such a mastery in mathematics and hydrography by the age of 15, when his father died suddenly, that the teenager was appointed to succeed his father in his professorship at Croisic in Brittany.

Like his father before him, Pierre Bouguer primarily applied his mathematical talents to questions of navigation, writing extensively on ship design, maneuvers, and navigation, including the derivation of a formula for calculating a measure of ship stability known as the metacentric radius. In fact, he beat out Leonhard Euler for the Grand Prix awarded by the French Academy of Sciences for his paper “On the Masting of Ships.”

He went on to win the Grand Prix twice more, for papers on observing variations (magnetic declination) of a compass, and the altitude of stars, at sea. And in 1746, he published the first treatise specifically devoted to naval architecture, Traite du Navire,  earning him the moniker “the father of naval architecture.”

Bouguer brought the same analytical skills to bear on his hobbies, one of which was photometry: the measurement of light in terms of its perceived brightness to the human eye. On November 23, 1725, he performed an experiment to compare the apparent brightness of the moon to a candle flame, hypothesizing that the human eye could detect whether two objects were the same brightness, even if it makes a rather poor light meter. With similar methods, he concluded that the sun’s light was a good 300 times as intense as that of the moon.

Bouguer published a specific formula for relating the absorption of light to the properties of whatever medium through which the light is propagating in his 1729 paper, “Essay on the Gradation of Light.” Bouguer’s Law states that “In a medium of uniform transparency the light remaining in a collimated beam is an exponential function of the length of the path in the medium.” For example, shine green laser light through a solution of Rhodamine 6B, and the beam intensity will become weaker as it passes through solution.

It is sometimes called Beer’s Law, the Bouguer-Lambert law, or Lambert’s law of absorption, due to confusion over attribution in the scientific literature. Johann Heinrich Lambert cited Bougeur’s essays in one of his own papers in his treatise Photometria, published in 1760, and it has been mis-attributed as Lambert’s original work. And in 1852, August Beer extended this exponential absorption law to incorporate the concentration of solutions in the absorption coefficient.

There are very specific prerequisites for Bouguer’s law to be applicable. For instance, the absorbing medium must be homogenous and must not scatter radiation. Ideally the incident radiation should be monochromatic, or at the very least have a bandwidth narrower than that of the absorbing medium. And that same incident radiation must consist of parallel rays traveling the same length within the chosen medium.

When combined with the inverse square law, such photometric measurements can be used to determine the luminosity of a celestial object, provided the distance is already known, or can be inferred. Bouguer’s law can also be used to describe the attenuation of solar radiation as it passes through the atmosphere, and to analyze polymer degradation and oxidation in infrared spectroscopy.

As impressive as Bouguer’s work on photometry might be, it was his ten-year expedition to Peru with Charles Marie de la Condamine to measure the length of a degree of meridian at the equator that brought him the most contemporary fame. Along with another scientist, Louis Godin, they set sail in April 1735 and soon began to bicker, with Bouguer and la Condamine eventually going their separate ways and taking a different route than Goudin to their destination.

Even then, relations between the two remaining scientists were hardly smooth sailing. Six years in, Bouguer had the gall to point out a small error in the measurement they had made jointly the year before. He suggested they recheck their results. La Condamine balked at this, and he, too, split with Bouguer. All three of the scientists who set out together returned home by different routes. In 1749, Bouguer published a full account of the expedition in La figure de la Terre déterminée par les observations de Messieurs Bouguer et de la Condamine.

He invented a heliometer, and his name is also associated with a meteorological phenomenon sometimes called “Bouguer’s halo,” more colloquially known as a “fog bow.” It occurs when the sun breaks through the fog on a mountain, for example, forming a faint ring of light. (It is also known as Ulloa’s halo, after the Spanish explorer Antonio de Ulloa.)

Bouguer died in Paris on August 15, 1758, but he left his mark not only on the law for absorption of light, but also on craters on the moon and Mars, two of which are named in his honor.