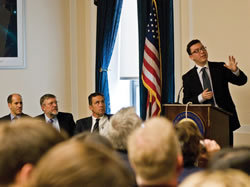 Luis von Ahn, of Carnegie Mellon University and founder of ReCAPTCHA, moderated the briefing. To his right are Martin Izzard, of Texas Instruments; William Phillips, Nobel Laureate from NIST; and Benjamin Bederson, of the University of Maryland and Zumobi, Inc.


Congressional staffers gathered at the Rayburn House Office Building in Washington on Sept. 21 to learn about how basic science research was integral to the development of the iPad–a tool many on Capitol Hill use daily.

In an effort to persuade Congress to invest in scientific research, the APS, participating with the Task Force on American Innovation (TFAI) and several other organizations, hosted an event called Deconstructing the iPad: How Federally Supported Research Leads to Game-Changing Innovation, which specifically targeted conservative freshman members of the House.

Bill Phillips, a Nobel Laureate at the National Institute of Standards and Technology (NIST), explained that federally-funded research was critical in developing the global positioning system (GPS) that enables commonly-used navigation apps on the iPad.

Federal funding in the 1950s enabled the creation of the world’s most accurate timekeepers–atomic clocks–without which GPS systems would not work.

Benjamin Bederson, co-founder of Zumobi, Inc. which develops apps, explained how a graduate student at the University of Delaware who had a disability that made using a standard computer keyboard too painful helped develop capacitive sensing–the thing that makes touch-screens work–in the 1990s thanks to a National Science Foundation (NSF) fellowship and an NSF grant. Martin Izzard, a scientist and researcher at Texas Instruments, spoke about the history of the integrated circuit, which is used in nearly all electronic equipment today.

Luis von Ahn of Carnegie Mellon, who moderated the event, told the staffers that because industry primarily funds projects with obvious profit potential, scientists rely on the federal government to fund things that don’t have clear outcomes but that do result in important discoveries.