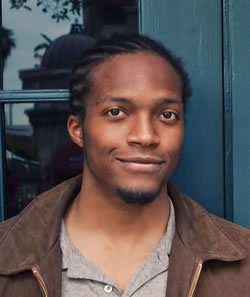 When Brandon Turner graduated from high school, his stepfather, Casey, used to jokingly call him a “renaissance man” because of his diverse interests within and outside of academia. He told Turner that the Rhodes scholarship was perfectly suited for such a person.

Now, poised to graduate from Wake Forest University in May with a bachelor’s degree in biophysics and minors in chemistry and sociology, Turner is one of 32 Americans awarded the prestigious Rhodes scholarship for 2012.
Selected from a pool of 830 candidates, scholars anticipate beginning their studies at Oxford in October 2012. The award covers all expenses for two to four years of study. In a press release, American Secretary of the Rhodes Trust Elliot Gerson called the Rhodes Scholarships “arguably the most famous academic award available to American college graduates.”

“When I heard the announcement, I was lost for words,” Turner said. “My stepdad is over the moon about it.”

Turner hadn’t always planned on majoring in physics. When he was younger, he thought that he would become a biologist. Everything changed when he took and fell in love with AP Physics as a senior in high school. He liked that physics combined mathematical rigor with the ability to explain the world–something that he appreciated and enjoyed about other sciences.

“I was really excited to find out, in college, that there is actually a great variety of ways to combine my interest in biology and physics,” he said. Jacquelyn Fetrow’s lab at Wake Forest presented an ideal combination of his two interests, and Turner has worked on various computational biophysics and bioinformatics projects there since his freshman year.

Fetrow was very happy to hear that Turner was named a Rhodes scholar. She calls Turner a smart, hardworking student who very much deserves the honor. “His contributions to my research and to the lab group rival those of graduate students,” Fetrow said.

Fetrow’s research group aims to identify or strengthen the connection between the structure of a protein’s active site and its function. “The more success we have with this will allow us to take any protein, analyze its structure, and make claims about its function,” Turner said. Since numerous medications deal with binding to the active site, Turner’s work could potentially have applications in reverse-engineering drugs or determining their ideal protein components.

His classes and lab work in college helped Turner develop a physicists’ approach to problem- solving that he finds applicable to other areas. “You can work out a lot beforehand if you picture a problem in your head and extrapolate from that,” he said.

Though Turner was aware of the Rhodes Scholarship since graduating high school, he dismissed the idea while in college, believing he wasn’t competitive enough. Tom Phillips, Director of the Wake Forest Scholars Program, approached Turner during his junior year and encouraged him to apply.

Turner will head to DC in September for a farewell party of sorts, where this year’s scholars will leave for Oxford together.  He looks forward to exploring a range of possibilities for his next two years abroad. He plans to try a Masters in evidence-based social intervention for a year, and if that doesn’t suit his tastes, to continue on with a one-year global health science program. Classes and summer research won’t leave Turner with too much free time to return to the US. Instead, his family anticipates seizing the opportunity to visit him–and Europe–in the near future.

Beyond the Rhodes Scholarship, Turner sees medical school on the horizon, perhaps with a residency in radiation oncology since the specialty can be physics-oriented. He dreams of a way to tie his myriad interests–biophysics, sociology, and social intervention, among others–into a cohesive set of activities.

Turner said that reading about the accomplishments of other Rhodes scholars blows him away, and that it’s an honor to be included in the group of current and past scholars. “I look at this as a great opportunity. It doesn’t say much about me yet. It says a lot about what I can do,” he said. “I’m looking forward to this opportunity to challenge myself and grow in the process.”