May 29, 1948: Results of first experiment on the Casimir effect

Ed. Note: Some factual errors in this column have been corrected in a letter by Kimball A. Milton that was published in the June 2012 APS News. 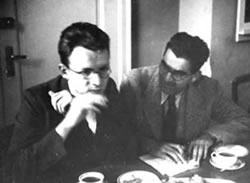 One wouldn't immediately suspect a connection between how gecko’s feet adhere to surfaces and the friction that so often plagues tiny nanomachines. The first involves an unusual feature of molecular attraction, while the second arises from the "stickiness" of the quantum force of empty space. Yet both have their roots in the work of two Dutchmen: Johannes Diderik van der Waals and Hendrik Casimir.

The oldest of ten children born to a carpenter in Leiden, van der Waals' working class roots meant he didn’t receive the classical education normally required to gain admittance to a university. But he did receive a decent primary education and became a teacher’s apprentice, eventually heading an elementary school. He also took advantage of a special provision to enroll in classes at the University of Leiden in physics, mathematics and astronomy, although he wasn’t allowed to matriculate as a full-time student. When the Dutch government founded a new type of secondary school aimed at educating middle class children, van der Waals qualified to teach at such schools.

By 1866, he was teaching at The Hague. Thanks to a special dispensation that waived the requirement for classical languages, he was finally able to be a regular student at the nearby University of Leiden, and pass the doctoral qualification exams in physics and mathematics. He completed his Ph.D. in 1873, with a thesis on the continuity of gaseous and liquid states, in which he first introduced the notion that molecules will attract one another if they are sufficiently close together, even in the absence of an electric charge or magnetic dipole moment.

Van der Waals went on to become a professor at the Municipal University of Amsterdam, and won the 1910 Nobel Prize in Physics at the age of 72. Casimir was a nine-year-old boy living in The Hague at the time, who would grow up to study with some of the greatest physicists of his era, and to build on van der Waals’ ideas concerning molecular attraction, as well as the work of Fritz London, who provided a quantum mechanical description of the van der Waals force in 1930.

Casimir received his Ph.D. at the University of Leiden in 1931, under Paul Ehrenfest, with a thesis on the quantum mechanics of a rigid spinning body and molecular rotation. During that time, he also spent 18 months in Copenhagen, working with Niels Bohr. Then he worked as an assistant in Zurich to Wolfgang Pauli before accepting a professorship at Leiden University. His research centered on heat and electrical conduction.

His time at Leiden was interrupted by the outbreak of World War II; the university was shut down in 1942. So Casimir moved to the Philips Research Laboratories in Eindhoven, becoming one of three directors in 1946. It was here that he became intrigued by the possibility of measuring the van der Waals force between two parallel metallic plates. Two years later, he and a student, Dirk Polder, conceived of an experiment to do just that. The theory they developed to predict their result centered on London’s reformulation couching the theory in terms of zero-point quantum energy fluctuations in an electromagnetic field. By then, physicists had ascertained that the quantum vacuum was not empty, but featured virtual particles popping into existence and annihilating just as quickly–so fast that they could not be detected.

The experiment involved two uncharged metal plates, ideal "perfect conductors," set perfectly parallel and just a few micrometers apart in a vacuum. There would be no external electromagnetic field in the vacuum. Yet Casimir and Polder reasoned that those virtual particles should induce equally short-lived electrical currents in the metal plates. Those currents, in turn, would generate magnetic fields, which would either pull the plates together or push them apart, depending on the direction of the respective currents and fields. But they predicted that once all these factors were accounted for, there would be a slight attractive net force, although depending on how the metal plates were arranged, there could also be a net repulsive force.

In May 1948, Casimir and Polder succeeded in building the experiment and reported on their results, which were encouraging, but not definitive, in part because their plates were not perfect conductors; indeed, no such material existed. It also proved difficult to achieve the precise proper alignment of the two metallic plates. Subsequent experiments to obtain more accurate measurements did not contradict the theoretical prediction either, but there were still large experimental errors. The best measurements that resulted from early experiments–such as the one performed by Marcus Sparnaay, Casimir's colleague at Philips, in 1958–were within 15% of the theory’s predicted value, not quite sufficient to fully verify the theory.

So it remained an intriguing experimental challenge for decades, although progress continued to be made on the theoretical side: Casimir's theory was unified with London’s earlier work in 1956 by Evgeny Lifshitz, whose analysis included more realistic material properties, rather than that unattainable perfect conductor. Finally, in 1996, a young scientist at the University of Washington, Steve Lamoreaux, succeeded in building an experiment sensitive enough to measure the Casimir effect to within five percent of its predicted value.

While the Casimir effect is insignificant at the macroscale, at the submicron level it becomes a dominant force. In microelectromechanical systems (MEMS), for example, it can cause ultra-small components to stick together. Separate the metallic plates at just 10 nanometers, for example, and the force of the sticking effect will be on a par with roughly 1 atmosphere of pressure. So dealing with the Casimir effect is essential to further technological progress at the nanoscale.

Researchers at the University of St. Andrews have suggested that it may be possible to manipulate the Casimir effect so that the "stickiness" becomes a repulsive force instead, simply by placing a specially designed lens between two objects. This would mean that, instead of sticking together, micromachined parts could levitate instead, solving the friction problem.