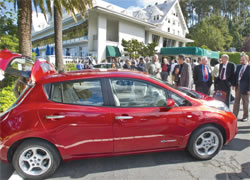 Participants examine a Nissan Leaf on display at the conference.

Despite their many potential advantages, all-electric vehicles will not replace the standard American family car in the foreseeable future. This was the perhaps reluctant consensus at a recent symposium focused on battery research.

As the talks at the symposium emphasized, powering cars with electricity is a dream whose realization is drawing closer, if not yet close enough. A battery-electric car powered by a green grid would eliminate America’s dependence on imported oil and reduce emissions of CO2 into the atmosphere. However, the driving range of a battery-electric car is too limited for many Americans, and the cost is high, even though electricity is much less expensive than gasoline for a given driving range.

Researchers agreed that the lithium-ion chemistry used in today’s generation of batteries for electric cars–and laptops and cell phones–is reaching maturity, and that only incremental improvements can be expected in energy density, which needs to be higher, and cost, which needs to be lower, for widespread use in battery-electric vehicles (BEV)–cars which are powered only by electricity from the electric grid and stored onboard. Lithium-ion batteries are adequate for hybrid electric vehicles (HEV) like the Prius, and marginally adequate for plug-in-hybrid vehicles (PHEV) like the Chevy Volt. However, the range of a fully electric vehicle such as the Nissan LEAF–powered only by electricity stored on board and without a gasoline “range extender”–is too low for many drivers, who may use a BEV as a second car for urban trips while maintaining a gasoline-powered or hybrid car for trips exceeding the electric range of a BEV.

The issue of range limitation and range anxiety–fear of running out of charge far from a charging station–is related to the almost complete absence of infrastructure for charging electric cars. Eventually such infrastructure will likely be built, but perhaps not soon enough to recharge the present generation of electric cars.
The need for research on a new chemistry to develop high-density batteries was a theme of the symposium. Paul Alivisatos, Director of LBNL, and a Fellow of APS, summarized research needs: “It remains true today, as in the past, that we need a fundamental understanding of the physics of how energy-conversion processes take place, at a much deeper level, in order to achieve a truly sustainable energy future.”

Research is presently focused on two different chemistries:  lithium/oxygen (lithium/air) and lithium/sulfur. Both theoretically offer much higher energy density than is possible even at the limit of lithium-ion-battery development. However, the technical difficulties in making a practical battery with good recharging capability, using either of these chemistries are enormous. There are major research issues concerning the cathode, the anode, and the electrolyte. Many approaches are being followed, including studies using nanotubes, nanowires, nanospheres, and many other nanomaterials. There were reports on large-scale computation modeling projects, and essentially every talk was accompanied by high-quality scanning-electron-microscope images, including in-situ movies. However, none of the researchers reported on progress to the point where a practical battery using one of these chemistries could be envisioned.