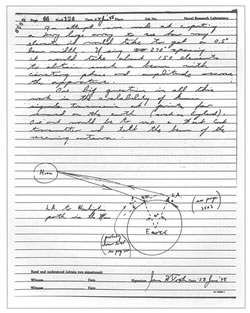 An entry in James Trexler's notebook regarding moon bounce communications

We think nothing today about the proliferation of artificial telecommunications satellites orbiting Earth. But before that system was in place, there was the U.S. Navy’s Communication Moon Relay Project, intended to serve as a secure and reliable means of wireless communication, using the moon as a natural satellite.

Proposals for using the moon as a radio wave reflector date back to 1928, and the U.S. Army’s Project Diana successfully detected radar waves bouncing off the moon in 1946. That experiment piqued the interest of Donald Menzel of the Harvard College Observatory, a former Navy Reserve commander. He thought the moon showed promise as a secure communications satellite.

Wireless transmission was commonplace by the post-World War II era, but long-distance high-frequency transmissions relied upon refractions of the radio waves by Earth’s ionosphere. Solar flares or geomagnetic storms seriously disrupted those transmissions, and were difficult to predict. The ability to bounce radio waves off a sitting target like the moon–or, later, an artificial satellite–would make it possible to maintain wireless communications even during solar flares or geomagnetic storms. There was also interest in using such a system to track radio signals from the Soviet Union and Eastern Europe, at a time when diplomatic relations with the US were becoming rather frosty. The Navy’s powerful radar receivers had already been picking up stray radio signals from Europe and Japan during World War II–a phenomenon referred to as “anomalous propagation.”

It was a Naval Research Laboratory engineer named James Trexler who put the two ideas together and suggested using the moon for both communications and radio intercept systems. Trexler studied electrical engineering at Southern Methodist University, where his father was a professor of political science. But he wasn’t especially academically inclined, much to his family’s disappointment. Still, he had a knack for hands-on experiments and was an accomplished amateur radio technician, skills that enabled him to support himself as an undergraduate, and also to land a job with NRL.

According to a 1948 entry in his scientific notebook, Trexler was intrigued by the possibility that the moon had an ionosphere, which would mean certain radio frequencies could reflect off that ionosphere with much greater efficiency than from the actual surface of the moon. He devised a means of testing such a system using “a beamed antenna having a sharp East-West pattern and a broad North-South shape.” He added “The intensity of the signal would be noted continuously and an attempt would be made to correlate it with the position of the moon.” While such equipment would be expensive to construct, he thought it would be worth the cost.

At its Blue Plains field station in 1948, the NRL set up several German Würzburg antenna arrays salvaged from the war, and began carrying out regular observations of the moon by August 1949 as part of a classified military espionage program called Passive Moon Relay (PAMOR). Code-named “Joe,” the system proved sufficiently promising to warrant further funding for development.

A new antenna was constructed in Stump Neck, Maryland, shaped like a parabola with an elliptical opening 220 by 263 feet. The first test run occurred on October 21, 1951, when the 750-watt transmitter sent out a few short 198-megahertz pulses, and received an echo of much higher fidelity than expected. This pushed the program into high gear, since the intelligence potential for the technology was even greater than anticipated.

In fact, the fidelity of the return signal was so high, the NRL commissioned a spinoff project called Communication Moon Relay, a.k.a. “Operation Moon Bounce.” By 1954, Trexler was confident that “the fidelity of the moon circuit is much better than predicted, resulting in the possible use of many types of circuits such as high-speed teletype, facsimile, and voice.” He proposed using the moon as a passive reflector “to broadcast to half the world at any one time,” at very high frequencies. Such a system would also be ideal for two-way communications between ships, submarines or large aircraft.

By then, the original PAMOR project had stalled, since the antenna at Stump Neck proved too small to collect weaker Soviet radar signals. But it was still ideal for Operation Moon Bounce, which required only a simple antenna to receive signals. On July 24, 1954, Trexler spoke into a microphone in the Stump Neck Laboratory, and his words returned to him two and half seconds later, after a 500,000 mile journey. It was first time a human voice had been transmitted beyond the ionosphere and returned to Earth.

The following year, Navy scientists successfully completed the first transcontinental test of the system, bouncing a signal off the surface of the moon that was detected by a receiving station at the U.S. Navy Electronics Laboratory in San Diego. On November 29th, at 11:51 p.m. Pacific Standard Time, NRL’s associate director of research, Robert Morris Page, sent a teletype message to Frank Kurie, the technical director of the Navy Electronics Laboratory. It urged him to “lift up your eyes and behold a new horizon.”

Ultimately, the transmissions were extended to Wahiawa, Hawaii, after tweaking the system to reduce signal loss. In 1956, the National Academy of Science’s Advisory Committee on Undersea Warfare recommended using moon-reflection path signaling for submarine ship-to-shore communications. And the system also proved useful to astronomers, since they could use it to study the moon when the body was in the wrong position for effective radio transmission.

The completed Communication Moon Relay System was inaugurated publicly in January 1960, and was used to beam images of the USS Hancock aircraft carrier from Honolulu to Washington, DC. Despite its success, the moon relay system was soon eclipsed by the Navy’s artificial satellite communication system, although the knowledge gleaned from the former made the new system possible.