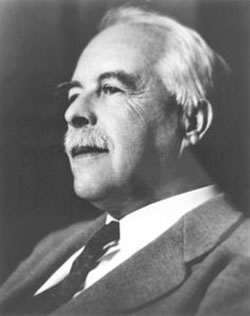 At the dawn of the 20th century, Max Planck and Albert Einstein turned physics on its ear by introducing the notion of quanta. Einstein’s paper of 1905 dealt with the particle nature of light, but didn’t call the particles photons. The coinage of that terminology comes from an American physical chemist named Gilbert Newton Lewis.

A native of Weymouth, Massachusetts, Lewis was largely educated at home by tutors, although he briefly attended public schools between the ages of 9 and 14, at which point he enrolled at the University of Nebraska. Three years later, at age 17, he transferred to Harvard College, completing his PhD in 1899 when he was just 24. He spent a year in Germany as a traveling fellow, studying under notable scientists like Wilhelm Ostwald and Walther Nernst, before returning to Harvard to teach.

In 1904, Lewis moved to the Philippines to head the Bureau of Science’s unit on weights and measures, but he held the post for only a year. Instead, he returned to Boston and took a faculty position at MIT. In 1912 he joined the faculty of the University of California, Berkeley, where he spent the bulk of his scientific career.

Early on, Lewis was fascinated by thermodynamics, particularly as it pertained to chemical equilibrium, and wrote a number of papers on the then-nascent theory of relativity, proposing an alternate derivation of mass-energy equivalence from that of Einstein. In 1913, he was elected to the National Academy of Sciences.

Lewis is best known for his work on chemical bonding, particularly the notion of the covalent bond as outlined in his classic 1916 paper, “The Atom and the Molecule,” and a 1923 paper on the electron-pair theory of acid-base reactions. As early as 1902 he had been using rough sketches in his lecture notes, depicting cube-shaped atoms in which the corners represented possible positions of electrons. Eventually he realized that the electrons in an atom pair up around the nucleus, most commonly forming a tetrahedron, and that two bonding atoms could share paired electrons between them. These ideas later influenced the work of Linus Pauling, among others.

He was also the first to coin the word “photon” to describe the unit of light in a December 18, 1926 letter to Nature. Technically, his understanding of the term was that it described a carrier of “radiant energy”–not a particle of light per se: “I therefore take the liberty of proposing for this hypothetical new atom, which is not light but plays an essential part in every process of radiation, the name photon.” In that sense, his concept differed from Einstein’s 1905 quantum theory of light, but “photon” came to be used to describe what Einstein originally termed “light quantum” (lichtquant).

Lewis has a street in his hometown of Weymouth named after him, as well as a wing of the local high school library. Berkeley’s Lewis Hall is so named in his honor, and he received many professional accolades for his research. But the Nobel Prize in Chemistry eluded him. Some have speculated that his bitter rivalry with Nernst was partly to blame, with the latter using his position on the selection committee to block Lewis’s nominations.

It was especially disappointing because one of Lewis’s own students, Harold Urey, won the 1934 chemistry prize for the discovery of deuterium–work which owed no small debt to Lewis’s own contributions in using the Berkeley cyclotron to purify and characterize heavy water. Lewis resigned from the NAS that same year, possibly in a pique over this professional slight, although he may also have been frustrated by the failure of his own nominees to be elected to that august body. Another young physicist Lewis mentored, Glenn T. Seaborg, also went on to win the Nobel Prize in 1951. (Lewis did prefer to work with exceptional students, and their later success is, if nothing else, a testament to his excellent judgement.)

For all his scientific accomplishments, Lewis met with a tragic end. In 1946, one of his graduate students came to the Berkeley lab and found Lewis’s body under a workbench, apparently the victim of toxic fumes of liquid hydrogen cyanide. He had been working on an experiment using the substance, but a broken line caused the cyanide to leak into his laboratory workspace. Officially, his death was attributed to coronary artery disease, but rumors have persisted over the years that Lewis committed suicide.

The chemist had been struggling with depression, possibly stemming from his snubbing by the Nobel Prize committee despite a record 35 nominations over his lifetime. On the day he died, Lewis had lunch with Irving Langmuir, who won the 1923 chemistry prize for his work on surface chemistry and was in Berkeley to receive an honorary degree. Colleagues recalled Lewis came back from that lunch visibly moody. A few hours later, he was dead.

We likely will never know for certain whether Lewis took his own life, but his legacy lives on– not just in his scientific papers, and his two sons (both of whom became chemistry professors), but in the nomenclature he coined. Every time we use the word “photon,” we pay some small homage to Gilbert Lewis.