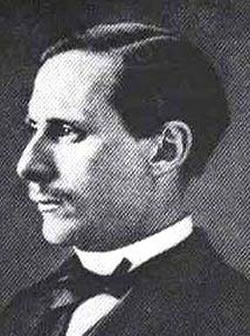 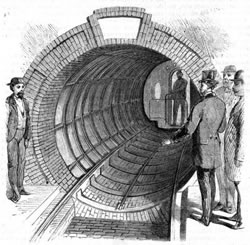 
Tunnels and pneumatic transportation systems are a staple of classic science fiction, starting with Jules Verne’s Paris in the 20th Century (1863), in which the author envisions tube trains stretching across the ocean. In 1882, Albert Robida described not only tube trains, but pneumatic postal delivery systems in his novel, The Twentieth Century. Those authors based their fictional creations on real systems that were actually built, some of which still exist today.

In 1812, a man named George Medhurst speculated that it might be possible to blow carriages laden with passengers through a tunnel, but he never got around to building such a system. He lacked a pump with enough power to generate the requisite air pressure. By the mid-1850s, there were several rudimentary “atmospheric railways”–in Ireland, London, and Paris–and while the London Pneumatic Despatch system was intended to transport parcels, it was large enough to handle people. In fact, the Duke of Buckingham and several members of the company’s board of directors were transported through the pneumatic system on October 10, 1865, to mark the opening of a new station. A prototype pneumatic railway was exhibited at the Crystal Palace in 1864, with plans to build a version connecting Waterloo and Charing Cross by running under the river Thames.

Those early efforts inspired a man named Alfred Ely Beach back in the United States. Born in 1826 in Springfield, Massachusetts, Beach’s father was a prominent publisher, and his son followed in his footsteps, eventually purchasing a fledgling magazine called Scientific American. But he was also an inventor and patent lawyer, patenting his design for a typewriter for the blind–an invention that garnered him a gold medal at the 1853 Crystal Palace Exposition–and founding his patent agency with his friend, Orson Desaix Munn.

From his office window in downtown Manhattan, Beach could see the congested traffic along Broadway in particular and pondered the possibility of a public transport system. He dismissed the idea of an elevated train on the grounds that it would be noisy and unsightly, focusing his attention on an underground option. He published an 1849 article in Scientific American suggesting a system employing horse-drawn cars to carry passengers instead of conventional steam engines, which would produce too much soot. Gasoline and electric motors were not yet widely available.

Then Beach discovered pneumatics: “A tube, a car, a revolving fan! Little more is required!” he enthusiastically exclaimed. The idea was to put people in carriages and propel them through underground tubes using air pressure generated by gigantic fans. He first built a prototype above-ground model, which debuted at the 1867 American Institute Fair. It was little more than large wooden tube (roughly six feet in diameter and 100 feet long) capable of holding a small vehicle with a ten-person capacity, with a gigantic fan on one end capable of funneling a blast of air to propel the car through the tunnel. When the fan was reversed, it would pull the car back to the origin point.

The demonstration was a huge success, and Beach proceeded to solve the problem of digging a tunnel underneath the buildings of lower Manhattan: he invented a hydraulic shield tunnel driller capable of moving left, right, up or down, while minimizing disturbances to the streets above. But he couldn’t get permission from the city to construct a prototype underground system, given the political corruption in City Hall at the time. So Beach sneakily built the underground pneumatic subway anyway, pretending he was really building a pneumatic mail delivery system, and he did it right under the nose of City Hall, beneath a rented storefront across the street.

On February 26, 1870, Beach unveiled his masterpiece, and it was an immediate novelty attraction for the public, especially given the luxury of the station: it boasted a grand piano, chandeliers, and a fully operational fountain stocked with goldfish. There was a single car to fit within the tube, which spanned nine feet in diameter and ran from Warren Street to Murray Street at 10 MPH. A giant fan nicknamed “the Western tornado” supplied propulsion via a steam engine that drew in air through a valve and directed it into the tunnel. Upon reaching the Murray Street station, the car would trip a wire that rang a bell back at Warren Street. The engineer on duty then reversed the blower, sucking the car back to the station, “like soda through a straw.”

The subway proved to be a popular attraction for the first year or so, and Beach fought for the next three years to get a construction permit to extend the line uptown all the way to Central Park, competing with a plan for an elevated viaduct that had the support of key politicians in the state legislature. Alas, while he ultimately succeeded–despite two vetoes by the governor–it proved an empty legislative victory: a stock market crash (the “Panic of 1873″) crushed his dream for good. He had to close his pneumatic subway for financial reasons.

Beach’s failure didn’t keep others from speculating on so-called “vactrains” (vacuum tube trains). The US government considered the possibility in the 1960s of running a vactrain–combining pneumatic tubes with maglev technology–between Philadelphia and New York City, but the project was deemed prohibitively expensive, and was scrapped. An engineer with Lockheed named L.K. Edwards proposed a Bay Area Gravity-Vacuum Transit system for California in 1967, designed to run in tandem with San Francisco’s BART system, then under construction. It, too, was never built. Nor was the underground Very High Speed Transportation system, conceived by Robert M. Salter of RAND in the 1970s to run along what we now call the Northeast Corridor.

Beach caught pneumonia and died on January 1, 1896, and didn’t live to see the debut of New York City’s first underground train (the IRT) in 1904. His subway was forgotten until 1912, when a construction crew digging a tunnel for a new line running under Broadway knocked through a wall and found the old Warren Street station. The passenger car was still on its track. The City Hall station on what is now the BMT line boasts a plaque in Beach’s honor.