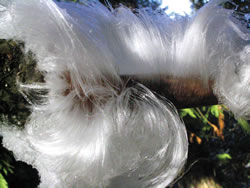 The 17th century scientist Robert Hooke is best known for the eponymous Hooke’s Law and for his masterwork, Micrographia, a treatise detailing his observations of everyday objects under a microscope, complete with eye-popping illustrations. But his scientific interests were very diverse, and among his earliest work was a pamphlet on the phenomenon of capillary action.

Born on the Isle of Wight to a curate, Hooke was initially destined to become a minister, like his three brothers, but he suffered from bad headaches, which made studying difficult, and his parents abandoned his formal education. The young Robert loved the natural world and showed a proficiency for mechanical tinkering, building such devices as a working clock and a model of a ship with working guns. He also showed a gift for drawing. When his father died, the 13-year-old Hooke was apprenticed to the leading portrait painter of the age, Peter Lely.

But Hooke complained that the oils and varnishes irritated his chest. Deciding the apprenticeship was a waste of time and money, he left to attend Westminster School, where he acquired mastery of ancient languages, learned to play the organ, experimented with flying machines, and is said to have mastered the first six books of Euclid’s Elements in a week. He boarded with the headmaster, Richard Busby, who became Hooke’s earliest mentor.

In 1653 Hooke became a chorister at Christ Church, Oxford, and found himself keeping company with some of the top British scientists of his day. He never earned a formal degree, but he worked briefly as a chemical assistant to Thomas Willis, and in 1658 he became assistant to Robert Boyle, applying his mechanical skills to the construction of an improved version of Boyle’s air pump (machina Boyleana), and gaining a thorough mastery of chemistry and practical laboratory skills.

He also became fascinated by the challenge of keeping correct time on ships at sea–a key factor in the quest to accurately determine longitude. The pendulum clocks of the era couldn’t adapt to the pitching of a ship, and he had the idea of using springs to control the balance wheel instead. His experiments were successful, and he went so far as to have attorneys draft a patent for his design of a spring-controlled clock, with an eye toward making his fortune. But when he learned more about the legal ramifications, he opted not to file the patent. Christiaan Huygens later published his own version of a balance spring mechanism in 1675.

Hooke had plenty of other scientific interests to keep him occupied, and a tight-knit group of colleagues concerned about preserving their research results. They resolved to found their own philosophical society. The first meeting of the Society for the Promoting of Physico-Mathematical Experimental Learning took place on November 28, 1660 in Gresham College, attended by a dozen scientists.

It was at just such a meeting that Hooke presented his very first scientific finding to his gathered colleagues on April 10, 1661, reading aloud from a short pamphlet demonstrating that the narrower the tube, the higher water would rise in it, due to what we now call capillary action.

In 1662, Hooke was appointed curator of experiments to what had now become the Royal Society, responsible for the experiments performed at its weekly meetings, although he received no payment initially for his services. He was elected as a Fellow of the Society in June 1663, and he was granted a small stipend the following year and made curator of experiments for life. In 1665 he was finally hired as a professor of geometry at Gresham College, giving him financial stability at last.

The publication of Micrographia that same year cemented his scientific reputation. Described in contemporary accounts as a “lean, bent and ugly man,” Hooke was keenly sensitive to ridicule. So he did not take kindly to playwright Thomas Shadwell’s The Virtuoso, which included a caricature of an experimental scientist clearly based on Hooke. “Damnd Doogs, Vindica me Deus, people almost pointed,” Hooke huffed in his diary after attending a performance.

While largely overshadowed by his contemporary, Isaac Newton, Hooke was unsurpassed in his time as an inventor and designer of scientific instruments. He invented the compound microscope; a wheel barometer; and the universal joint found today in all motor vehicles (the “Hooke’s joint”). He was among the first to grasp the importance of improving the resolution of astronomical instruments, and built the first reflecting telescope, using it to observe the rotation of Mars and note one of the earliest examples of a double star. And he was an accomplished architect, providing his services as a surveyor and designing many London buildings after the Great Fire of London.

In his later years, Hooke’s health deteriorated, and he suffered from numerous symptoms of cardiovascular disease and diabetes: swollen legs, chest pains, dizziness, emaciation and blindness. He died on March 3, 1703.

Hooke’s humble pamphlet on capillary action wasn’t the last time the phenomenon was a subject of scientific interest. It’s also behind the formation of so-called frost flowers (or ice ribbons), first noted by astronomer John Herschel while walking through the woods one winter morning. In March 1884, Nature reported that one Professor Schwalbe, at a meeting of the Physical Society in Berlin, had succeeded in producing his own ice flowers from withered and rotten twigs he’d brought with him to the conference from the Harz Mountains.

In 1914, a physicist at the National Bureau of Standards named William Coblentz observed frost flowers while strolling in Washington, DC’s Rock Creek Park. When he observed his first frost flowers, he wanted to understand the physical mechanisms behind their formation. He cut off stems, inserted them in moist soil and test tubes, recorded how quickly water moved up the dry stems, and figured out how to grow ice ribbons in the lab. He conclusively demonstrated that the water that makes the ice comes from within the stem, rather than being deposited from moisture in the air, and that they formed due to capillary action.