Brinkman Looks Back on Good Science and Tough Decisions 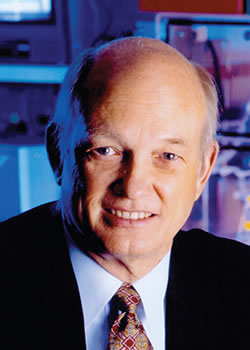 William F. Brinkman stepped down last month as the Director of the Office of Science in the U.S. Department of Energy, the leading funder of physical science in the federal government. He had held this post since June of 2009, prior to which he was a Senior Research Physicist at Princeton, and before that Vice President for Research at Bell Laboratories. He also served as APS President in 2002.

As he left office, Brinkman took time to share some thoughts with Michael Lucibella of APS News.

What can you say were the highlights of your tenure as the Director of the Office of Science?
Well, several things. I think we moved ITER [the International Thermonuclear Experimental Reactor] forward very successfully, we moved the free electron laser to completion and it’s working. Those were very important accomplishments. NSLS II [National Synchrotron Light Source II] is moving forward. A lot of good science came out of things like the biofuel centers and the EFRCs [Energy Frontier Research Centers] I think they were very innovative and have produced a lot of very good science, whether it was on lignins [an organic compound that could be a renewable fuel source] or on breaking down cellulose and that kind of thing, but also on new types of solar cells with silicon pillars. A lot of good science came out and I feel pretty good about that. In addition, we’ve managed to build as good a staff as we’ve had in a long time. So I’m very pleased with that too, I think the people that I am leaving behind are very good.

How has the Office of Science changed under your watch? What have you done to make that change happen?
I think there were a couple things that were important. One was we tried to reach out more to the applied areas and energy, much more strongly than we have in the past, and I think that has worked. We have a lot of interactions with the energy side of the house. We have what we call “Tech Teams,” members from ARPA-E and from the various energy [associate director] levels. We have these groups working together to try to figure out what each program is doing and how they fit together. I think we were particularly successful with respect to batteries, where the tech team was the team that worked out the FOA [Funding Opportunity Announcement] for the batteries, and did this as a group across the three boundaries. This was very successful, and I think that that was one of the important changes.

We’ve made a lot of changes administratively in the way we do business. We now have almost turned the whole business of applying for a grant into a totally electronic approach. We’ve sped up the process. A lot of things like that. We’ve worked hard at a lot of different aspects of running the organization well.

Was there anything you would have liked to have been able to accomplish that you weren’t able to?
My biggest frustration had to do with two things. One of them was the fact that we couldn’t seem to get enough money to do both ITER and the domestic program in fusion. That’s hurt that field some. The other thing is, we’re still struggling with the whole issue with what’s going to happen at Fermilab and the shutting down of the Tevatron and making sure the US has a place in the whole international high energy physics milieu, and that’s something that’s really going to have to be worked on in the next year or two.

Do you think that America is losing some of its competitiveness in science?
One of the things that worries me is the very conservative fiscal attitude that’s occurring in Washington. President Obama has been quite good about not cutting our program, but at the same time we were promised a doubling and none of that happened and it is unlikely to happen. What worries me is the rest of the world is building up their scientific budget substantially over the last few years. You look at Europe; there’s a lot going on in Europe. You look at China; there’s a lot going on there, South Korea too. Competitiveness is something I worry about a lot from a US standpoint. The X-ray free electron laser is great, it’s leading the world, but there are four more that are going to be built in four different countries in the next years. So there’s a lot happening out there.

What do you think will be the lasting effects of sequestration?
It’s certainly going to delay a lot of programs and a fair number of grants are not going to be made and fulfilled, so it’s going to have a real impact. It’s $250 million worth of research that won’t be done. It’s that simple.

What about the recent travel restrictions that the administration has imposed? Do you think that’s going to affect scientists’ ability to do science?
Yes, very much so. It will affect the people trying to travel, and this whole conference thing has created a very large bureaucracy that I don’t think is a very big benefit, and I think we’re spending more on the bureaucracy than the savings we might accumulate from restricting conference attendance. So I don’t see it as having been such a successful approach to science. Scientists have to travel, that’s the thing that I tell people, scientists have to travel because that’s what you do. You have to advertise the results, otherwise people won’t pay attention to them. And you’ve got to go find out what other people are doing, because you want to be ahead of the field, not behind the field. There are very real reasons that scientists travel. I feel the same way about our program managers. Our program managers have to be able to travel, and we have certainly suffered a lot of restrictions on our end. Traveling is very important to science.

What do you think is going to be the future of nuclear physics and fusion physics. What do you see happening to those fields?
I think both of those fields are eventually going to be ok. We have to build the FRIB [Facility for Rare Isotope Beams ] machine at Michigan State, and it’s going to take a while. We don’t really have enough money in the nuclear physics program to put that in with everything else, but we’ll get there. Likewise in fusion, the way we set up the ITER budget will allow fusion’s domestic program to get back on its feet in a year or two. I’m hoping that will work out and I think that’s very, very important. We have been very strongly pushing a programmatic side of our science relevant to near-term energy programs and issues, so we pushed basic energy sciences and computing and biological and environmental sciences, and maybe we’ve gone a little bit too far, and we have to pull back and help out fusion and [High Energy Physics] and the physics of the future.

Are you generally optimistic about the direction of science that the country is going in? What do you see coming up on the horizon?
It’s a very interesting time because there is probably nothing more important to mankind than the climate issue. But a lot of the response to that is often applied research. We have to be careful, it seems to me, that even though that’s extremely important, we have to watch out that we don’t do in our basic research. That’s a very real risk as we go forward. I personally came to work in Washington because I thought the climate situation was sufficiently bad that we really needed to try to do some things. I think Steve Chu was reasonably successful in starting a bunch of things that mattered from a climate point of view. But boy, we are a long way from where we need to be.

What kind of advice would you offer to your successor?
My successor has to make the best of the issues that we just talked about. They are not easy issues, and he or she will have to figure out how to move forward.