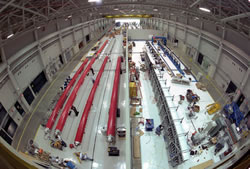 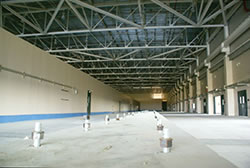 In July 2012, physicists around the world thrilled to the news that the last piece of the Standard Model of Particle Physics — the Higgs boson — had likely been discovered by CERN's Large Hadron Collider. It was the culmination of decades of research by theorists and experimentalists alike, but the achievement was bittersweet for the American contingent. They couldn't help thinking of an earlier accelerator, the Superconducting Supercollider (SSC), which never made it to completion.

The roots of the SSC arose from a cancelled project at Brookhaven National Laboratory called ISABELLE, during the Reagan administration. By 1984, the under-construction ISABELLE was beset with problems, notably superconducting magnets that didn't work. Even worse, its primary purpose had been to discover the W and Z bosons — and those particles were found the prior year by CERN's rival accelerator in Switzerland. Leaders in the high-energy physics community decided the best course of action would be to cancel ISABELLE and redirect the funds to the design and construction of an even bigger accelerator, initially nicknamed the "desertron," possibly because it would be so large, it would have to be built in a remote low-population area where land came cheap.

In 1986, physicists unveiled the SSC's design, which featured a ring 53 miles in circumference, filled with 8600 superconducting magnets. The 20 TeV proton beam would pass through a four-centimeter bore in each magnet as it made its way around the ring. The following year, the Department of Energy presented the SSC plans to President Reagan and his cabinet, estimating the total cost at around $4.4 billion (later raised to $5.3 billion to include the cost of detectors). The project appealed to Reagan, who recalled advice he'd once received from a star quarterback: "Throw deep." Told that he would make a lot of physicists ecstatic with his decision to approve the SSC, Reagan purportedly replied. "That's probably fair, because I made two physics teachers in high school very miserable."

That sense of victorious elation did not last long; the project experienced difficulties from the start. Still, construction began in 1991 in Waxahachie, Texas, and within two years, workers had bored through enough sandstone and limestone to create 30 kilometers of tunnels. A 1991 effort to cancel the SSC, brought on by concerns about cost overruns, failed in the House of Representatives, 165 to 251. But it proved to be a temporary reprieve.

The rising price tag in the face of economic recession as President Bill Clinton took office in the early 1990s certainly figured prominently in the collider's falling fortunes. By then the estimated cost had ballooned to more than $10 billion, and the DOE's 1993 Baseline Validation Report called for increased safety and contingency margins, resulting in another 15% increase to the budget, to $11.5 billion. National priorities had shifted, and slashing the federal budget topped the list. The SSC was not the only major science project with a hefty budget; it was competing with the International Space Station, which held greater appeal for the new Congress than the more esoteric objectives of the SSC; nor were Clinton's science advisor, or his Energy Secretary, particularly passionate about the SSC.

One of the most frequent criticisms leveled was poor management, particularly when it came to implementing the required bureaucratic procedures. A 1994 follow-up Congressional report listed several examples, spanning a lack of mandatory internal reviews and communication breakdowns, to consistently underestimating costs on the project. The physicists may have been brilliant at science, but they were less enthusiastic about red tape. One senior physicist grumbled undiplomatically, "Our time and energy are being sapped by bureaucrats and politicians."

There was considerable tension even within the physics community itself, with physicists in other subfields resenting the high-energy physicists for garnering what they perceived to be the lion's share of funding and public attention. They perceived it as a zero sum game: the more government money funneled into building the SSC, the less was available for other projects. Among the most vocal detractors was Nobel Laureate Philip Anderson, a condensed matter physicist who bemoaned "the almost complete irrelevance of the results of particle physics not only to real life but to the rest of science."In the end, the House of Representatives voted to cancel the SSC on October 27, 1993, by a vote of 283 to 143, cutting its losses on the $2 billion already spent. The decision did not lead to increased funding for other areas of physics. In fact, the biggest beneficiary was the LHC, as the US particle physics community successfully lobbied for a greater role in the international collaboration. That investment paid off handsomely with the discovery of the Higgs boson. An International Linear Collider is planned for the next generation, but whether it will actually be built is still uncertain.

As for the SSC, its empty, abandoned tunnels are still there, under the plains of central Texas. The equipment was sold off long ago, and a multimillionaire named Johnnie Bryan Hunt finally bought the site in 2006, intending to build a large and secure data storage facility there. Alas, six months later, Hunt slipped on a patch of ice and hit his head on the pavement; the fall killed him, and his Collider Data Center project died with him. A chemical manufacturer bought the site in 2012.

Perhaps the SSC's most lasting contribution has been to fiction: it inspired two novels: a comic novel by Herman Wouk called A Hole in Texas, and John G. Cramer's Einstein's Bridge. The latter envisions an alternate history in which the collider was actually built and begins trial runs, with earth-shattering ramifications involving exotic particles, wormholes, aliens, and time travel. It seems a fitting paean to the accelerator that might have been.