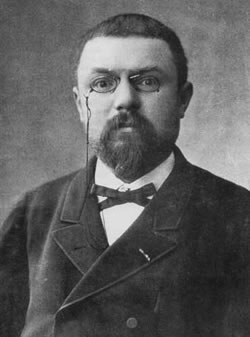 
In 2000, the Clay Mathematics Institute announced it would award a $1 million prize for the correct solution to each of seven unsolved mathematical problems, collectively dubbed the Millennium Prize Problems. Only one of the seven has since been solved: the so-called Poincaré Conjecture, considered one of the most important open questions in topology.

The conjecture was the brainchild of Jules Henri Poincaré, born in April 1854, the son of a professor of medicine at the University of Nancy. A childhood bout of diptheria meant that Poincaré received his early schooling from his mother. But in 1862 he entered the local lycee, where he proved an exceptional student, excelling in all his subjects save for music and physical education. One of his instructors described him as a "monster of mathematics." After graduating, he and his father served in the Ambulance Core during the Franco-Prussion War.

Poincaré, then just 32, was elected to the French Academy of Sciences in 1887, the same year he also won a competition organized by the king of Sweden to resolve the three-body problem on the free motion of multiple orbiting bodies. That work helped lay the foundation for modern chaos theory. Poincaré's many other contributions to mathematics would later prove seminal to establishing the field of topology, as well as the theory of special relativity.

As the 20th century dawned, Poincaré turned his attention to determining the topological properties of a sphere. Topology concerns those properties of geometric shapes that don't change when those figures are stretched, shrunk, or distorted in some way, such as whether there is knot in a closed curve in space, or whether or not it has a boundary. Poincaré was interested in spheres. A two-dimensional sphere–or, topologically speaking, the two-dimensional surface of a three-dimensional sphere –possesses a property known as simple connectivity, such that any given two-dimensional closed surface, regardless of how it is distorted, is topologically equivalent.

Poincaré's famous conjecture, outlined in a 1904 paper, simply states that the same holds true for three-dimensional spheres as well, or rather, the three-dimensional surface of a four-dimensional sphere. It is usually stated thusly: "Every simply connected, closed 3-manifold is homeomorphic to the 3-sphere." It is easy enough to make that statement, but far more difficult to devise a rigorous mathematical proof.

Poincaré died in 1912, from complications following prostate surgery. His conjecture would remain unsolved for nearly 100 years. The first claimed proof appeared in the 1930s, by the mathematician J.H.C. Whitehead, but he later retracted it. Other claims appeared throughout the 1950s and 1960s, but these, too, were quickly found to be flawed, and were retracted.

Many mathematicians made small steps toward the eventual solution. Cornell University's William Thurston pointed the way when he suggested exploiting the fact that spheres have constant curvature, regardless of dimension. His Berkeley colleague, Richard Hamilton, built on that work and employed a technique called Ricci flow, which treats transforming shapes in a similar fashion to heat flow. Much like flowing heat smoothes out irregularities in the temperature to make it more uniform, Ricci flows can smooth out irregularities in sphere-like shapes. Unfortunately, this process breaks down at some point, resulting in singularities, requiring topologists to perform a kind of "surgery" on the figure in question by grafting on pieces of other shapes.

But even Hamilton wasn't sure if all possible singularities could be repaired. The final piece of the puzzle was provided by a reclusive Russian mathematician named Grigori Perelman. In November 2002, Perelman submitted a short paper to the arXiv, followed by two more papers. He demonstrated that, indeed, it was possible to repair all such singularities and offered the first rigorous proof of the Poincaré conjecture. The papers caused a sensation in the mathematical community as teams of experts set about the intensive task of peer reviewing the work. "It has taken us some time to examine Perelman's work," admitted University of Michigan mathematician John Lot. "This is partly due to the originality of Perelman's work and partly to the technical sophistication of his arguments. All indications are that his arguments are correct."

In 2006, news broke that Perelman had been awarded the prestigious Fields Medal, the highest honor in mathematics, for "his contributions to geometry and his revolutionary insights into the analytical and geometric structure of Ricci flow." Always eccentric, the increasingly reclusive scholar turned it down, declaring "Everybody understood that if the proof is correct, then no other recognition is needed." It was not the first time he had turned down a prize, having previously declined to accept a prize from the European Mathematical Society, allegedly because he did not think the prize committee was qualified to assess his work.

Four years later, the Clay Mathematics Institute declared that he had indeed solved the first of the seven Millennium problems, and awarded him the $1 million prize. Perelman declined that honor as well, insisting that Hamilton had made comparable contributions to the solution, adding, "I have all I want." Increasingly disillusioned with the field, Perelman subsequently left mathematics altogether, leaving his position with the Steklov Institute. Today he is reportedly living with his mother in St. Petersburg, Russia. But his work on the Poincaré conjecture stands as the mathematical breakthrough of the century.

Gessen, Masha. Perfect Rigor: A Genius and the Mathematical Breakthrough of the Century. New York: Houghton-Mifflin-Harcourt, 2009.

Nasar, Sylvia and Gruber, David. "Manifold Destiny: A Legendary Problem and the Battle Over Who Solved It," The New Yorker, August 21, 2006.