APS Celebrates 20 Years in One Place 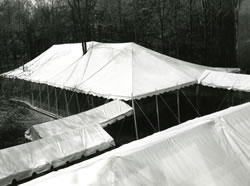 In April, 1994, six months after ACP opened, a dedication ceremony took place in a tent pitched on the ACP grounds behind the building. As the picture shows, despite some inconvenience, no trees were sacrificed. The ceremony featured several local dignitaries, including Maryland Governor William Donald Schaefer.

In the early 1990s, APS was headquartered at 335 E. 45th Street in New York, barely a Molotov cocktail's toss from the United Nations. But the building, shared with the American Institute of Physics (AIP), had gotten too small for the burgeoning Society. Relocation was necessary.

In October, the American Center for Physics celebrated 20 years in College Park, since first opening its doors in 1993. Former AAPT Executive Officer Bernard Khoury led a discussion answering employees' questions about the dog statues that guard the back door and how the ellipse-shaped road surrounding the building came to be. Khoury finished with a series of photos of the building's construction and other captured memories. The audience included a number of long-time employees who had followed APS and AIP to Maryland when they relocated from New York City those many years ago.