Each year, APS News looks back at the headlines around the world to see which physics news stories grabbed the most attention. They’re stories that the wider public paid attention to and news that made a big splash. In roughly chronological order, the Top Ten Physics Newsmakers of 2013 are: 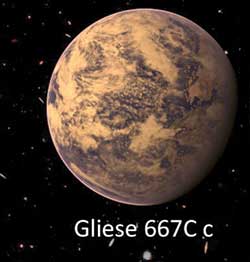 Exoplanets
2013 was another banner year for the search for another Earth. In February astronomers announced the discovery of Kepler-37b: With a diameter just slightly larger than Earth’s moon, it’s the smallest exoplanet discovered yet. Two months later, astronomers discovered the twin worlds of Kepler-62e and Kepler-62f, planets about the size of Earth, covered in liquid water oceans, and orbiting safely within their sun’s habitable zone. Then in June another surprise: Astronomers using Earth-based telescopes discovered that the three planets orbiting the star Gliese 667C were all within its habitable zone (largest number of such planets in the one solar system discovered so far). However, sad news came at the beginning of June. The prolific Kepler Telescope, which revolutionized the planet-hunting field, suffered a terminal malfunction, effectively ending its mission after only four years. In the November issue of the Proceedings of the National Academy of Sciences, scientists estimated that one in five sun-like stars in the galaxy have planets in their habitable zones, meaning statistically that there could be an inhabited planet within 12 light-years of Earth.

Planck Telescope
The European Space Agency released the final results from the Planck Space Telescope in March. The spacecraft took the most detailed picture yet of the cosmic microwave background, and there were still some surprises left. It turns out that the universe is a little bit older (13.82 billion years old as opposed to 13.7 billion) and made up of more dark matter than astronomers had previously thought. In October, the agency announced that after its successful mission, the observatory would shut down for good.

Higgs Boson
The Higgs boson continued to make headlines a year after its discovery. In March, CERN made an announcement that with more than twice as much data as in July 2012, the research team was even more convinced that the particle discovered was the Higgs boson. In October, Peter Higgs and François Englert jointly won the Nobel Prize for their fundamental contributions to the underlying theory.

Dark Matter
Apparently conflicting results dominated the ongoing search for dark matter this year. First in April, the Cryogenic Dark Matter Search reported that after analyzing data from their five-year run, they identified three signals that looked like dark-matter candidates. Though the team was unwilling to say the results amounted to a discovery, it seemed tantalizing evidence of a relatively light dark-matter particle. However, in October, scientists at the Large Underground Xenon experiment in South Dakota released the null results of their first run. It should have been able to spot the signals seen by CDMS, but the fact that it didn’t has left physicists scratching their heads.

Omid Kokabee
Physicist and political prisoner Omid Kokabee released a letter in April from jail stating the reason the government of Iran has imprisoned him is because he has steadfastly refused to work on their weapons programs. Kokabee is an Iranian citizen who was studying at the University of Texas in Austin when he was arrested at the Tehran airport in January of 2011 while visiting his family. Eventually he was tried and sentenced to ten years for “cooperation with a hostile government.” In his letter from prison, he said the Iranian government had asked him many times over the years to work for the military, but he refused, and that’s the real reason for his incarceration. 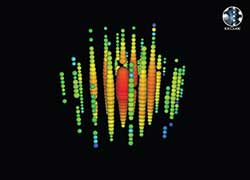 Space invaders: Data collected on neutrinos from space by the IceCube experiment.

Politics of Science
Science and politics is a volatile mixture, and this year was particularly contentious. In April a leaked draft of a Republican bill, the “High Quality Research Act,” sparked outrage amongst scientists who saw its “national interest” clause as a ploy by Congress to interfere with the grant-making authority of the National Science Foundation. Though never introduced because of the outcry, elements of the bill resurfaced in November in the House’s FIRST Act, which reauthorizes funding for the NSF. That legislation however has not been passed. In the midst of this controversy, scores of federal scientists had to walk away from their research when the federal government shut down for sixteen days in October.

Particles from Space
Earth is constantly pelted by a menagerie of particles, and this year scientists identified some of their interstellar sources. In April, the team running the Antarctic neutrino detector, IceCube, announced that they saw two neutrinos of such high energy, more than a petaelectronvolt, that it's almost impossible for them to have originated in the Milky Way Galaxy. Then in August, researchers from the Fermi Large Area Telescope collaboration confirmed that, as scientists had long suspected, supernovae are among the main sources of the high-energy protons known as cosmic rays.

Ununpentium
A new element joined the periodic table in August. An international team of researchers created a few short-lived atoms of ununpentium (its temporary name) with atomic number 115 at the GSI Helmholtz Center for Heavy Ion Research in Germany by bombarding a film of americium with calcium ions. The element was first reported in 2003 by a group in Russia, however the International Union of Pure and Applied Chemistry said they wouldn’t recognize the discovery until an outside group confirmed it. That confirmation came this year, and now researchers get to argue about what to call it.

Voyager 1
For the first time, a human-built object left the bounds of the solar system. In September 2013, NASA released its official statement that the Voyager 1 space probe had entered interstellar space. Launched in 1977, the spacecraft visited Jupiter and Saturn before setting its course for the stars. It actually passed through the heliopause, the outermost edge of the solar wind, in August of 2012, but after several previous false positives, scientists needed more data to be sure.

NIF
In October, a rumor started floating around that the National Ignition Facility had achieved ignition, in which more energy is released from a fusion reaction than was put in. Alas it was not to be. After a mistaken BBC News article touched off a flurry of escalating headlines on the Internet, reason prevailed and it turned out that the facility was still a long way from its goal. The timing couldn’t have been worse. The article was published in the middle of the government shutdown, when there was no one at the lab to set the record straight.

See also the top physics research stories of 2013 published in the APS journals and highlighted by the editors of Physics.

Editor's Note: This article was corrected on 2/25/2014 to reflect the fact that data from the Fermi Large Area Telescope, rather than IceCube, were used to confirm the origin of high-energy cosmic rays.