February 1932: James Chadwick’s Letter to Nature on the Neutron 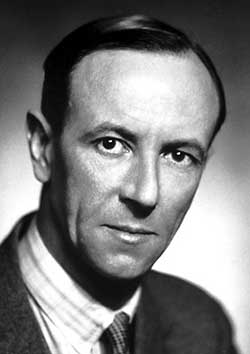 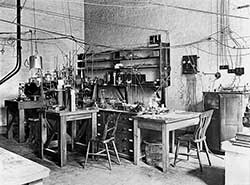 Among the many scientists who witnessed the famous Trinity test on July 16, 1945, was a modest British physicist named James Chadwick. While many physicists contributed to this remarkable achievement, it was Chadwick’s discovery of the neutron in 1932 that made atom-splitting–and the nuclear bomb — a very real prospect in the first place.

Born in Cheshire, England to a family of modest means, Chadwick relied on scholarships to pursue physics at Victoria University in Manchester, walking the four miles to campus every day. He graduated with top honors, co-authoring his first paper with Ernest B. Rutherford. Chadwick earned his master’s degree in 1912, and then won a scholarship to study beta radiation in Berlin under Hans Geiger.

When World War I broke out, Geiger reported for active duty, and warned Chadwick to return to England as soon as possible. Chadwick tried, but by then international travel had become too difficult. He was briefly arrested and spent ten days in jail, falsely accused of having uttered treasonous statements. The laboratory orchestrated his release and he returned to work in Berlin — a decision he would soon regret.

As the war progressed, all British citizens were sent to a prison camp called Ruhleben, including Chadwick. It was a former racing track, and the prisoners were housed in the stables, six men to a cell, sleeping on mattresses on the floor. Food was scarce, and the first winter in the camp was especially brutal: Chadwick had been rounded up with just the clothes on his back, not sufficient for the harsh German winters. “I can remember the agony when my feet began to thaw out about 11 AM,” he later recalled.

There were a handful of other scientists, like Chadwick, and they were given permission to set up a crude laboratory in one of the abandoned barracks in the camp. They traded for chemicals and built their own equipment from whatever materials were at hand. Chadwick once fashioned a makeshift magnet, coiling the salvaged copper wire by hand one sweltering summer evening. He found that toothpaste with thorium powder was mildly radioactive, and also explored the photochemical reaction of carbon monoxide and chlorine.

After the war ended in November 1918, Chadwick returned to Manchester to recuperate at his parents’ house. He was physically weak, and the severe conditions of his internment meant that for years afterward, he had difficulty digesting fats. He was also broke. Rutherford found a part-time teaching position for him, and when Rutherford succeeded J. J. Thomson as head of Cambridge’s famed Cavendish Laboratory, Chadwick opted to follow his mentor, working on experiments on artificial nuclear disintegration to earn his PhD in 1921.

Two years earlier, Rutherford had discovered the proton, but in his subsequent experiments, the atomic number consistently was less than the atomic mass. This couldn’t be due to the number of electrons, so Rutherford hypothesized that there was another type of particle in the atomic nucleus — one with mass but no charge. By 1925, physicists had proposed nuclear spin to explain the Zeeman effect (shifts in atomic energy levels in a magnetic field), but it didn’t seem to fit the prevailing model for the atomic nucleus, believed to contain just protons and electrons.

Chadwick replicated a German experiment in which polonium struck  a beryllium target, and the unusual form of radiation produced provided evidence of a new kind of chargeless particle. Encouraged, Chadwick devoted all his energy to further experiments, often working through the night, and his efforts paid off within weeks.

In February 1932, he submitted a letter to Nature detailing his experimental results as evidence for the existence of a neutron. He followed with a second paper in May, providing more of the technical details. The discovery was quickly championed by Niels Bohr and Werner Heisenberg, and Chadwick worked with Maurice Goldhaber to measure the mass of the neutron, and concluded the neutron is a nuclear particle rather than a proton-electron pair.

The ongoing economic depression meant tight funds for scientific research, even at the Cavendish lab. Chadwick wanted to build a cyclotron so the lab could keep pace with the cutting-edge nuclear physics now being done in the US, but Rutherford was old school, and didn’t want to invest in one, believing bulky, expensive equipment wasn’t necessary to do good science. Frustrated, Chadwick left in 1935 for the far less prestigious University of Liverpool to take over an old laboratory so out-of-date it still used direct current. He won the Nobel Prize that same year, and used part of the prize money to finance a cyclotron, relying on grants and donated materials to make up the difference. By July 1939, the machine was up and running.

Chadwick’s discovery made it possible to create elements heavier than uranium in the laboratory via capture of slow neutrons and beta decay–a critical breakthrough for the eventual development of the nuclear bomb. The neutron proved to be an ideal “bullet” for penetrating nuclei, thanks to its lack of charge. When World War II broke out, Chadwick was vacationing with his family in Sweden. This time, he returned to England immediately and lent his scientific expertise to determining the nuclear cross-section of uranium-235. After the war ended, he returned to his old life in England in 1946.

In 1948, Chadwick opted to become master of Gonville and Caius College, a position he held until his retirement in 1958. He died peacefully in his sleep in 1974 — a fitting end to the quiet man’s long, rich life.

Editor's note: The January 2014 "This Month in Physics History" column in APS News recounted how Alan Turing was convicted of criminal behavior in 1952 after admitting his homosexuality. Two years later he committed suicide. On 24 December 2013, Turing was granted a royal pardon by Queen Elizabeth II.