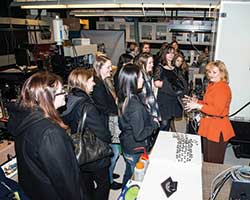 Undergraduate women studying physics have gained tremendous opportunities for networking and support over the last few years through the annual Conferences for Undergraduate Women in Physics (CUWiP). Since the first CUWiP in 2006, the number of students has exploded from 29 to over a thousand attending this year’s conferences.

Compared with the single university that hosted the original CUWiP, eight universities across the country hosted this year̕s conference during the Martin Luther King weekend (17-19 January). The conferences are sponsored by the APS Committee on the Status of Women in Physics (CSWP), and former CSWP member Patricia Burchat chaired this year’s National Organizing Committee.

“Our goal was for each participant to walk away from the conference with new confidence in her understanding of the role of physics in her own education, professional community, and in our global economy,” said Donna Hammer, co-organizer of the Maryland conference.

During the three-day conference, students had the opportunity to present their undergraduate research in poster sessions, participate in career workshops and panel discussions, and network with one another. They also heard from professional physicists, both female and male, about cutting edge physics research.

Learning from these invited speakers offered some of the most inspiring moments for Noura Jaber, who attended the conference at the University of Maryland. Jaber is a freshman at Bryn Mawr College in Pennsylvania and first learned about the conference while chatting with Angela Walker. Walker is a senior scientist at the National Institute of Standards and Technology and was one of Maryland’s CUWiP panel speakers this year.

“It’s nice to see women take leadership roles in the physics world,” said Jaber, who was referring to one of UMD’s invited speakers, Ellen Williams. Williams is Chief Scientist at the BP energy company and a distinguished professor of physics at the University of Maryland. Last November, President Obama nominated her for the position of Director of ARPA-E (the Advanced Research Projects Agency-Energy) in the Department of Energy (DOE).

Jaber said that learning “how [Williams] got there and how she managed to develop leadership roles” was inspiring and described Williams’ confidence as contagious. Jaber plans to declare her physics major next year when she’s a sophomore.

Jennifer Liang, another undergraduate physics student who attended the Maryland conference, said that she was surprised to see the large number of women at the conference.

“I didn’t know there were so many women in physics,” said Liang, who is a junior at the University of Maryland. “It has inspired me to…keep moving toward my goals.” Liang plans to apply to graduate school in physics next year.

Since 2012, APS has helped coordinate these conferences by facilitating registrations and co-organizing events with host institutions. This year, APS received about 880 new female student members as a result of the registration process and even more attended the conferences, explained APS Women and Education Program Administrator, Deanna Ratnikova.

“When students applied to attend the conferences, they were given the option to opt-out of the free one-year student membership,” Ratnikova said. “If they did not opt out, they were awarded free membership for a year….the attendance for the 2014 conferences was 1006 students.”

One of this year’s APS representatives, Careers Program Manager Crystal Bailey, gave a talk entitled “Breaking the myth of the non-traditional physicist.” Students first entering physics as undergraduates may think that pursuing a career in academia is the norm, but Bailey explained that is not the case.

“When you look at the statistics,” Bailey said, “industry has been the largest employment base for physicists with PhDs in the last 30 years.”

“The sooner we start telling students about the real employment picture,” she said, “the longer they will have to design a path that makes sense for them and gain the skills they need to be successful in the path they choose.”

In addition to staff support from APS, the conferences received financial aid from the National Science Foundation and DOE which together will provide about $210,000 to support these conferences each year through 2016. The bulk of the funding, however, came from individual sites, which assembled more than $440,000 for this year’s conferences.

Conferences for Undergraduate Women in Physics

Committee on the Status of Women in Physics