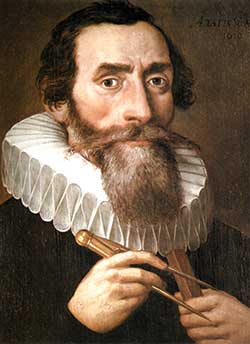 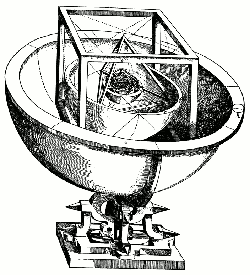 (Top) A 1610 portrait of Johannes Kepler by an unknown artist. (Bottom) Kepler's Platonic solid model of the Solar system from Mysterium Cosmographicum (1596).

Today, we think of physics and astronomy as being inexorably linked, but this was not the case in the 16th century, when the former was deemed natural philosophy, while the latter was linked to mathematics and liberal arts. One scientist who helped break down that barrier was Johannes Kepler.

Born in December 1571, just west of modern-day Stuttgart, Kepler was the grandson of a former lord mayor, the youngest of four children. By the time of his birth, the family’s financial circumstances were much reduced, and his father eked out a living as a mercenary, abandoning the family when young Johannes was just five years old. His mother was a healer and herbalist — a dangerous profession in that superstitious age.

A bout with smallpox crippled his hands and hampered his vision, but Kepler showed a gift for mathematics early on. He fell in love with astronomy at age six, when his mother took him out to watch a comet streak across the night sky. He experienced his first lunar eclipse a few years later. He studied philosophy and theology at the University of Tübingen, where he gained a reputation as a skilled astrologer — still considered a legitimate branch of astronomy at the time — and embraced the then-relatively-new Copernican heliocentric system for the motion of the planets, eventually becoming a math and astronomy teacher in Graz.

On July 19, 1595, while lecturing on the periodic conjunction of Jupiter and Saturn, Kepler had an insight: There might be a geometric underpinning to the universe. He worked out a scheme in which the five Platonic solids — octahedron, icosahedron, dodecahedron, tetrahedron, and cube — could be encased within spheres and then nested within each other. This produced six layers, which in Kepler’s view corresponded to the six planets known at the time (Mercury, Venus, Earth, Mars, Jupiter and Saturn). He even worked out a preliminary formula connecting the size of each planet’s orb to how long each took to complete one orbit around the sun, although he later discarded it in favor of something more precise.

This became the basis for one of his earliest treatises, Mysterium Cosmographicum, among the first defenses of the nascent Copernican system to appear in print. His labors over its publication nearly ended his engagement to a rich young widow named Barbara Müller. Her father initially opposed the match, despite Kepler’s noble birth, because the astronomer was so poor, but eventually relented. Kepler married Müller in April, 1597. The marriage was not a particularly happy one, and Müller died of spotted fever in 1611. (His second marriage, to Susanna Reuttinger in 1613, proved more successful.)

Mysterium Cosmographicum was an unusual scientific treatise, given the inclusion of a detailed chapter attempting to reconcile the Bible with the geocentrism of Copernicus. Those passages were removed before the book was published late in 1596. This work cemented his reputation. He sent copies to several noted colleagues, including Danish astronomer Tycho Brahe, who initially offered a rather harsh critique of the German scientist’s model.

Kepler was keen to address those criticisms and make further progress on his ideas. Since Brahe had amassed far more accurate observational data from his private observatory than that readily available to Kepler, he visited Brahe in Prague early in 1600, studying Brahe’s data on Mars to test the theory laid out in the Mysterium Cosmographicum. The following year, he moved his entire family to Brahe’s observatory — in part because he had been banished from Graz for refusing to convert to Catholicism.

When Brahe died soon after, Kepler succeeded him as imperial mathematician; his Lutheran faith was tolerated in the Prague court. His duties mostly consisted of providing horoscopes to the emperor. Kepler despised much of astrology, dismissing it as “evil-smelling dung,” but — a creature of his era — he believed a scientific approach to the subject could be useful. He later published a treatise attempting to find middle ground between the overselling of astrology and what he thought was a kneejerk rejection of it by many scientists.

Brahe’s observational data proved invaluable to Kepler’s research, which expanded to include the laws of optics. In 1604, he published Astronomiae Pars Optica, which helped lay the foundation of modern optics. Those insights proved useful when he studied the newly invented telescopes used by Galileo and designed an improved Keplerian model using two convex lenses, rather than one convex and one concave. Kepler also witnessed a supernova in October 1604, which became the basis for De Stella Nova, published two years later.

Kepler also tried his hand at more fanciful writing, penning an allegory called Somnium (The Dream) in 1611 — arguably the earliest work of science fiction, since it centered on a trip to the moon and speculated about what astronomy would be like if conducted on another planet.

Many years later, Somnium would be used as evidence in his mother’s 14-month imprisonment and trial for witchcraft; it described a woman who summons a demon for help in mixing potions. (He revised the work after her acquittal to make the allegorical aspects crystal clear for the too-literal minded.)

Of course, Kepler is best known for his Laws of Planetary Motion. The planets move in elliptical orbits around the sun (Law of Ellipses); if you draw an imaginary line from the center of the sun to the center of a given planet, that line will sweep out equal areas in equal amounts of time (the Law of Equal Areas); and the ratio of the squares of any two planetary periods is equal to the ratio of the cubes of their average distances from the sun (the Law of Harmonies). The first two laws formed the basis for his treatise Astronomia Nova, and all three appeared in his most influential work, the Epitome Astronomiae Copernicanae.

Kepler died on November 15, 1630, and while the location of his grave has been lost over the intervening centuries, the epitaph he penned for himself survived: