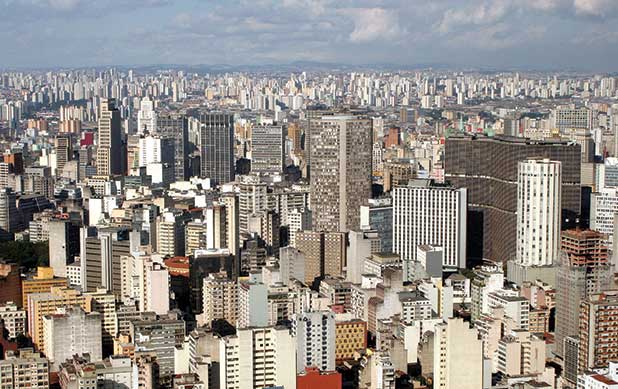 São Paulo City, capital of São Paulo State, which leads the country in funding for science and number of science PhDs awarded.


The eyes of the world were on Brazil as soccer teams from around the globe vied for the coveted World Cup. The very first game was played in São Paulo, the capital city of the state of São Paulo and the scientific capital of not only Brazil, but South America as well.

Of Brazil’s 27 states, São Paulo is by far the most populous and industrialized, and it contributes far more to the economy than any other state. Home to 43 million people, roughly 22 percent of the country’s total population, its economic output is fully a third of the country’s GDP. “It’s kind of like California,” said Carlos Henrique de Brito Cruz, head of the top science funding agency of São Paulo.

In addition, São Paolo leads the country in science. The amount the state spends on research is nearly three times that of all the other Brazilian states combined. About 45 percent of all PhDs awarded in Brazil are in São Paulo, and more scientific articles are written in that state alone than in any other country in Latin America.

The biggest driver behind the research focus is the São Paulo Research Foundation (FAPESP). Founded in 1962, it’s been the backbone of Brazilian science funding for more than half a century. The state’s constitution sets aside one percent of all revenue towards research funding, to be administered by FAPESP. Brito Cruz said that having this requirement kept funding consistent and predictable, letting scientists plan for the future, and he added, “Research is one of the things that require medium and long term plans.”

It’s a model that has started to be mirrored elsewhere in the country as well. After the fall of the military government in 1985, Brazil went through a re-democratization process, and around 1989 a number of states redrafted their constitutions. “When these states rewrote their state constitutions, they copied the part about funding agencies,” Brito Cruz said.

But it will take time for them to catch up. São Paulo is currently home to 19 state and three federal research institutions, including the Brazilian Synchrotron Light Laboratory, which gets a planned upgrading soon.

The Brazilian economy as a whole has been maturing and stabilizing over the last two decades. Economists frequently cite it along with China, India and Russia as growing global economic powers. Brito Cruz noted that the “stabilization of the Brazilian economy in 1994 allowed the government budget to be more predictable and more rational…. With the control of inflation, federal and state budgets were able to improve their planning.”

A contributing driver to this economic growth was the federal government’s effort to spur industrial research. Starting in about 1999, the government created a number of “sector funds,” which divert a small, fixed amount of the revenues of an industry towards applied research. “It’s not really a tax, it’s called a contribution,” Brito Cruz said. “You inject additional money into the funding stream for Brazil.” All together there are about a dozen such sector funds that help underwrite innovation in different industries.

“Today, both government and industry see research as an important element for the creation of development,” Brito Cruz said. “Industry became more and more aware of the value of innovation.”

But the changing political winds have made many in industry nervous about the future. Two consecutive leftist administrations have imposed additional regulations on various industries, cutting into profit margins and by extension research budgets. Brito Cruz adds, “The dark side of the present situation is that recent governments in Brazil have had an attitude that is somewhat hostile to industry.”

However, he is still upbeat about the general direction of scientific research both in Sao Paulo and Brazil as a whole: “I’m optimistic about the future. Every country sees difficulties now and again.”