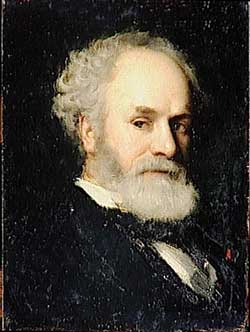 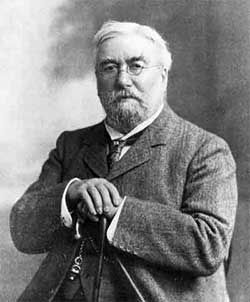 Despite being the second most abundant element in the observable universe, helium is relatively rare on Earth, the product of the radioactive decay of elements like uranium. In fact, it is so rare that helium was discovered only in 1868, thanks to the efforts of two scientists in particular, one in England, and the other in France.

In 1859, Gustav Kirchoff realized it was possible to deduce the chemical composition of the sun and other stars by analyzing the spectra of the light they emit. Kirchoff used this method to discover cesium and rubidium. Astronomers were particularly interested in studying solar prominences: colorful flame-like bursts now known to be hot clouds of dense gas. The best way to make such observations, scientists believed, was during a solar eclipse.

Born in Paris, Pierre Janssen suffered an accident as a child that left him permanently lame. He studied mathematics and physics at the University of Paris, eventually becoming a professor of architecture there in 1865. But his interests extended far beyond that specialty, and he found himself involved in numerous scientific expeditions relating to astronomy and geophysics. For instance, he traveled to Peru to study the magnetic equator, and to Italy and Switzerland to study the solar spectrum.

In 1868, Janssen traveled to Guntur, India, to observe the solar eclipse. He focused on the solar prominences and concluded they mostly comprise hydrogen gas, heated to extremely high temperatures. But on August 18, when he observed the sun’s spectrum through his spectroscope, he noticed that the wavelength of the yellow line supposedly indicating the presence of sodium didn’t actually match up to the wavelength for that element. In fact, it didn’t match the wavelength of any known element to date. The line was bright enough, he thought, that it should be visible even without the aid of an eclipse, provided a means could be found to filter out all but that wavelength of visible light. That is how he came to invent the spectrohelioscope to better analyze the sun’s spectrum.

Some 5,000 miles away, on October 20, 1868, the English astronomer Joseph Norman Lockyer also succeeded in observing the solar prominences in broad daylight. His paper detailing those observations arrived at the French Academy of Sciences on the same day as Janssen’s paper, so both men received credit for the discovery of helium.

Initially it was a dubious honor: Many colleagues doubted this could be a new element and ridiculed their conclusions. Others thought helium could exist only in the sun. In 1882, the Italian physicist Luigi Palmieri was analyzing lava from Mount Vesuvius when he noticed that same telltale yellow spectral line in his data — the first indication of helium on Earth. It would be another 12 years before the Scottish chemist William Ramsey found further experimental evidence of this new element.

The son of a civil engineer and nephew of a well-known Scottish geologist, Ramsey earned his doctorate at the University of Tübingen in Germany and eventually joined the faculty of University College London, publishing several papers on nitrogen oxides. In 1894, inspired by a lecture by Lord Rayleigh, Ramsey successfully isolated a new gas with no chemical reactivity–the first inert gas, which he dubbed argon, after the Greek word for “lazy.” Subsequently he discovered additional inert gases: neon, krypton, and xenon, eventually garnering the 1904 Nobel Prize in chemistry for his accomplishments.

In 1895, Ramsey was studying a chunk of uranium ore (cleveite), which he treated with mineral acids. He was hoping to isolate argon by separating nitrogen and oxygen from the sample with sulfuric acid. Instead, he noted the presence of an unusual gas locked inside the specimen–appearing in a spectroscope as a “glorious yellow effulgence,” according to Lockyer, to whom Ramsey had sent his sample for verification. Its spectrum matched that of the proposed new element observed in the sun’s chromosphere.

After running tests to ensure that the line was indeed a new element, as opposed to a new form of hydrogen, Ramsey’s work appeared in the Proceedings of the Royal Society of London later that year, and Swedish chemists Per Teodor Cleve and Abraham Langlet successfully isolated the gas from cleveite. Lockyer dubbed the new element helium, after the Greek word for the sun (helios).

Janssen, meanwhile, did not remain idle in the years following his seminal observations. He traveled all over the world to witness more solar eclipses in 1870, 1875, 1883 and 1905. For the 1870 eclipse in Algiers, he escaped Paris — then under siege at the height of the Franco-Prussian War — in a hot-air balloon. He also witnessed the transit of Venus in Japan in 1874, and again in Algeria in 1882, with the aim of capturing on film the exact moment when the transit began. He invented an instrument called the clockwork revolver to do so, capable of taking a series of 48 exposures in 72 seconds using the daguerreotype photographic process. The resulting images were sufficiently good to encourage other astronomers to adopt his method for future transits.

In 1893, he constructed an observatory on Mount Blanc, rightly determining that one could gain a considerable advantage at higher altitudes, where the atmosphere was thinner. By then 69, he nonetheless made the climb and spent several days making observations. He even made two cameo appearances in early films by the famed Lumière brothers. Janssen died on December 23, 1907, just three years after his more than 6000 solar photographs were collected and published in the Atlas de Photographies Solaires.