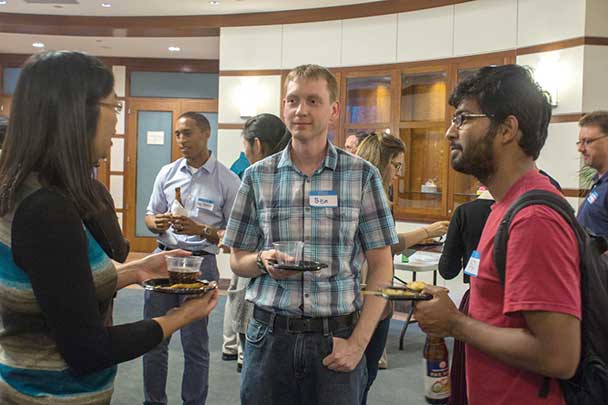 New APS Local Links chapters across the country rang in the new academic year in September with get-togethers hosted by all five groups.

“We’re trying to bring together students, postdocs, and physicists working in industry, national labs, and academia, so all of those stakeholders can build relationships,” said Crystal Bailey, the careers program manager at APS. “We see a lot of collaborations between industry and academia from a research perspective, and this helps build those connections.”

Groups in the Denver, Tampa Bay, Silicon Valley, Austin and Washington DC regions hosted events for scientists and students to meet and network with each other. “APS Local Links are grassroots, locally-based associations of physicists in a geographic area,” Bailey said. “They’re informal gatherings, usually at a bar or coffee shop or some other public space.”

The first one was held in Denver during the spring. Since then, the five groups across the country have met about a dozen times altogether. The September meetings attracted on average about thirty local physicists to each. Each local group has a lot of latitude for how and where to meet.

Each chapter usually coordinates somewhat with APS headquarters when getting started, but the goal is for the groups to become self-sustaining, involving local physicists and students to run them. “We’re trying to encourage groups not to design a very rigid, talk-heavy program,” Bailey said, adding that she hoped the different regions would meet about once every six weeks.

At the inaugural meeting of the Washington, DC area chapter on September 17, about thirty people from a range of backgrounds showed up to meet and mingle. “For all of us, networking is a big thing,” said Erika Jones, a PhD candidate at George Mason University in Virginia. “It’s a great opportunity to meet folks and get information.”

Greg Harry, a physics professor at American University in DC, brought a number of students from his school to the event. “It’s important for students to get a sense of the breadth of physics,” Harry said. “Especially at a place like American where there’s not that big of a faculty.”

The program came out of the recent APS strategic plan recommendation to reach out more to students and especially to industrial physicists. “That is part of the ongoing mission of APS, to strengthen our relationship with that community of physicists,” Bailey said.