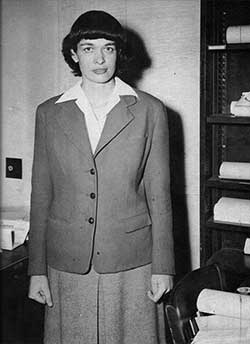 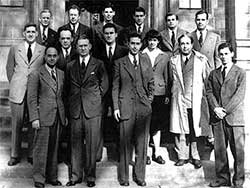 The Manhattan Project boasted many of the finest minds in physics from around the world in the 1940s, nearly all of whom were men. But there were a handful of women scientists who contributed to the wartime efforts to develop the first atomic bomb. The most recognizable name is Maria Goeppert Mayer, who later won a Nobel prize for developing the theory of nuclear shell structure. Less well known is Leona Woods Marshall Libby.

Born on a small farm in La Grange, Illinois, in 1919, Woods was the daughter of a lawyer and showed much academic promise, graduating from high school at 14 and earning a degree in chemistry from the University of Chicago by the age of 19. Inspired by hearing a talk by Nobel laureate James Franck, she asked to be his graduate student. He agreed but cautioned her, “You are a woman, and you will starve to death” — echoing the advice he had received, as a Jewish graduate student, from his own advisor. Woods opted to work with Robert Mulliken instead. He was not known for lavishing praise on his graduate students, but Woods later recalled two instances when he had told her “that perhaps not all he taught me was wasted,” which amounted to a gushing accolade by Mulliken standards.

While working on her doctoral thesis on the spectroscopy of silicon oxide molecules, Woods struck up a friendship with Herbert Anderson, a young physicist working in Enrico Fermi’s lab; they often went swimming together in Lake Michigan in the evenings. Noting her proficiency with vacuum technology, Anderson hired her once she finished her PhD to measure neutron fluxes with the detectors used by Fermi’s group.

“The (Manhattan) project was so secret they had to figure out something to do with a clever woman,” her son, John Marshall III, told the New York Times decades later. Fermi’s wife, Laura, later described Woods as “a tall young girl built like an athlete, who could do a man’s job and do it well.” Woods divided her time between her work with Fermi and helping her mother on the family farm near Chicago.

When Fermi’s nuclear pile went critical under the stands of an abandoned football stadium and made physics history on December 2, 1942, Woods — then just 23 — was the sole woman present. She wasn’t allowed to handle the graphite blocks, but did help calibrate the detectors by measuring the neutron cross section, using radium-beryllium as a source and a manganese foil. “When do we become scared?” she purportedly asked Fermi after the pile went critical.

In 1943, Woods married fellow physicist John Marshall, shortly after Fermi’s team moved to Argonne National Laboratory. She soon became pregnant, hiding her condition from most of her colleagues by wearing baggy denim clothing and arriving at work slightly earlier than usual to discreetly vomit so others wouldn’t notice her morning sickness. She gave birth to her son, Peter, in 1944 and returned to work within a few days.

Two years later she and Marshall moved to the nascent Hanford nuclear facility as part of the Argonne team assigned to oversee the powering up of the first reactor, leaving their infant son with her mother. She fended off questions about being one of the very few women on the Manhattan project, but said that she had been provided with a private bathroom in the reactor buildings. They worked in shifts, with Woods-Marshall taking the night shift with Fermi. While the Hanford reactor went critical right on cue on September 27, 1944, a few hours later there was an abrupt drop in power before the reactor shut down completely. “People stood around and stared at each other,” Woods later recalled.

Her first thought was that a water leak was to blame, but nixed this explanation when operators succeeded in powering the reactor up during the night, only to have it shut down again a few hours later. It was John Wheeler who recalled that there had been hints of a problem with poisoning via byproducts of the process used to make plutonium for bombs at the Oak Ridge reactor, although the exact isotope had never been definitively established. He and Woods-Marshall calculated the neutron cross-section and determined the culprit was a rare isotope, xenon-135, solving the stalling problem.

“I have no regrets,” she later recalled of the atomic bombs dropped on Hiroshima and Nagasaki. “I think we did right, and we couldn’t have done it differently.… It was a very frightening time.” Her brother had been a Marine on Okinawa, and her brother-in-law was a captain of a minesweeper during the war. “I’m sure these people would not have lasted in an invasion.”

Once the war was over, the Marshalls returned to the University of Chicago, where Woods-Marshall continued her work with the Institute for Nuclear Studies under Fermi, and gave birth to her second son in 1949. She and her husband separated in 1954, and Woods moved to the Institute for Advanced Study in Princeton, and then to Brookhaven National Laboratory, before landing on the faculty of New York University in 1960. Her divorce from John Marshall was finalized in 1966, and she married a chemist, Willard Libby.

By then she had moved to the University of Colorado, although she later joined her husband at UCLA in 1973 as a visiting professor of environmental studies and engineering. There, her research shifted to devising new methods for studying annual changes in temperature and rainfall patterns using isotope ratios of oxygen and carbon in tree rings. The Libbys were both strong advocates for food irradiation, and Marshall-Libby (as she was now known) suggested treating certain fruits, for example, with gamma rays instead of malathion.

Prolific to the end, Marshall-Libby’s last paper, on quasi-stellar objects, was published in 1984. She died two years later, on November 10, 1986, from a stroke brought on by anesthesia.