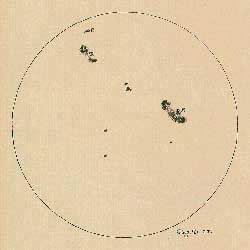 One of the drawings made by Galileo during his observations of sunspots. 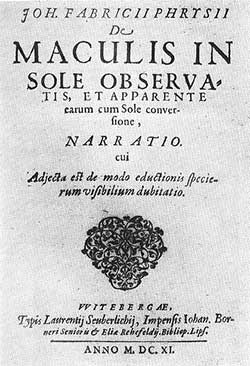 Jules Verne’s classic science fiction novel, From the Earth to the Moon, mentions a 17th century astronomer named Johannes Fabricius. In the novel, Fabricius claims to have seen through a telescope alien beings living on the moon. The aliens are fiction but Fabricius was real. The Dutchman was among the first people to observe sunspots through a telescope and the first to identify them as such — a small but vital contribution to astronomy when the field was at a crossroads between two competing models of the solar system.

The question of who first observed sunspots was the subject of bitter dispute in the early 17th century, although such arguments seem moot in light of so many earlier accounts by ancient astronomers. For instance, surviving Chinese records from 364 BCE indicate a possible sighting of sunspots, and by 28 BCE there were numerous mentions of the phenomenon in official records kept by Chinese astronomers. In 807, a Benedictine monk named Adelmus wrote an account of seeing Mercury pass in front of the sun, but in reality he saw a sunspot. There are similar sightings from the 12th century, also mistakenly interpreted as planetary transits. Johannes Kepler observed a sunspot in 1607 using a camera obscura. However, he too thought it was Mercury transiting the Sun.

Historians generally agree that it was the English astronomer Thomas Harriot who first used a telescope to observe sunspots in late 1610. Galileo made similar observations around the same time, accompanied by elegant sketches of the sunspots, although he didn’t study them seriously until 1612, and didn’t publish his findings until 1613. So did a Jesuit mathematician named Christoph Scheiner in October 1611, equipping his telescope with colored glasses and publishing Tres Episolae de Maculis Solaribus Scriptae ad Marcum a few months later under a pseudonym. Scheiner argued that the sunspots were solar satellites. In his mind, the sun could not have spots on its surface, marring its perfection, in keeping with the Ptolemaic notion of a perfect, unchanging sky.

Galileo begged to differ, insisting in a series of three letters in 1612 that the spots were more akin to clouds and hence likely to be found in the atmosphere or the surface of the sun. So the motion was evidence of the Sun’s rotation about its axis, thereby providing a key piece of evidence in support of the still-controversial Copernican model of the solar system. The third such letter may have been the first time the great astronomer expressed a positive view of the controversial Copernican system. But he was not the first to challenge the notion of sunspots as satellites — that honor belongs to Johannes Fabricius.

Born Johan Goldsmid in 1564 in a village called Osteel in northwest Germany, he was the oldest son of a Lutheran pastor and astronomer, David Fabricius. His father discovered the first variable star, Mira Ceti, in 1596. Initially, Fabricius senior believed he had seen a typical nova, but the star brightened again in 1609, and he realized this was a new kind of star.

Much of Johannes’ early education in math and science took place under his father’s tutelage, but the support of a wealthy patron eventually enabled the young man to pursue a more formal education, first at the University of Helmstedt, and then at the University of Wittenberg and the University of Leiden. It was in Leiden that Johannes encountered his first telescope — then an exciting new invention — and he brought one home to show his father in the winter of 1610.

On March 9, 1611, father and son rose at dawn and spied several dark spots on the surface of the sun through the telescope. But direct observation, even just before sunrise or sunset, caused considerable pain to their eyes. As Johannes later wrote, “For indeed it was to be feared than an indiscreet examination of a lower sun would cause great injury to the eyes, for even the weaker rays of the setting or rising sun often inflame the eye with a strange redness, which may last for two days, not without affecting the appearance of objects.”

Given the risk to their eyesight, the duo switched to a camera obscura (a basic pinhole camera also favored by Kepler for solar observations) for subsequent sightings over the next few months, and began tracking the movement of the spots. The spots moved across the face of the sun, disappeared on the western edge, and then reappeared on the eastern edge two weeks later.

It was the first published scientific treatise on sunspots. But Johannes’ pamphlet languished in obscurity, perhaps because he lacked a sufficiently influential patron and was rather isolated from the leading astronomers of the day. While Kepler read the pamphlet and admired it, Galileo and Scheiner were mostly likely unaware of its existence when they published their own sunspot treatises in January and March 1612, respectively.

Johannes died at 29 in 1617 from unknown causes. His father died the following year under bizarre circumstances: He denounced a local peasant for steeling a goose, and the enraged man killed the pastor by striking him on the head with a shovel. While neither achieved fame, there is a monument to them in an Osteel churchyard.

All those sunspot sightings, combined with the moons of Jupiter and other mounting evidence, constituted a tipping point among astronomers, including Scheiner, who abandoned his earlier stance that sunspots were solar satellites within ten years. The Copernican model of the solar system replaced the old Ptolemaic model within a generation. Sunspots have continued to fascinate scientists ever since.