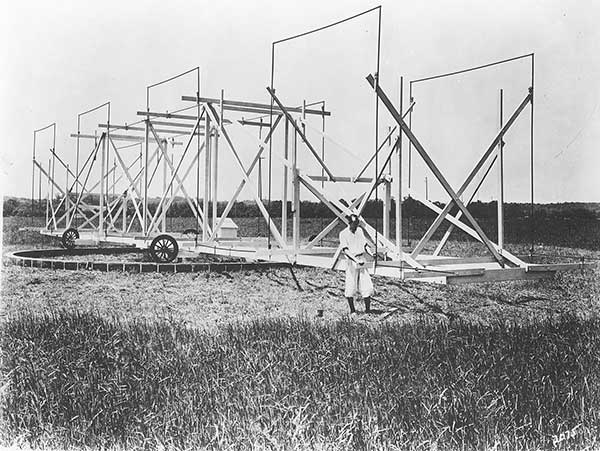 Karl Jansky built an antenna that could be rotated on the wheels of a Model T so that he could track down sources of radio static, inventing radio astronomy in the process.

Much of the outdoor footage for the 1997 film Contact was shot on-site at the Very Large Array observatory in New Mexico. Far more people have heard of the film than of the man for whom that observatory is named: Karl Guthe Jansky, known among astronomers as the father of radio astronomy.

Born in 1905, Jansky was one of six children. His father, Cyril, an electrical engineering professor at the University of Wisconsin, instilled a strong love of physics in his three sons. Karl’s older brother, Cyril Jansky Jr., insisted that his younger sibling “was no bookworm,” citing his skill at tennis and hockey, and later status as a Monmouth County table tennis champion in New Jersey, as evidence.

Karl Jansky earned his degree in physics from the University of Wisconsin, and spent an extra year as a graduate student, although he never completed his thesis. Instead, he joined the research staff of Bell Telephone Laboratories in 1928. He had been diagnosed with chronic kidney disease in college, so Bell Labs was initially reluctant to hire him, but relented when big brother Cyril — an electrical engineer, like his father, and a former Bell Labs staff member who helped build some of the earliest radio transmitters in the U.S. — interceded on his behalf.

Jansky’s first assignment was to study intermittent static sources that might be interfering with radio waves used for transatlantic telephone transmissions. It was a challenging assignment; Jansky had to design and build special instruments for that purpose, most notably a large directional antenna system mounted on a motor-driven turntable that rotated through 360° about a central vertical axis, riding on a circular track on the wheels of a Model-T Ford. It was dubbed “Jansky’s merry-go-round.”

Once he analyzed all that data — collected over many tedious months — Jansky identified three basic types of static: local thunderstorms, distant thunderstorms, and a third he described as being “composed of very steady hiss static the origin of which is not yet known.” His careful wording came at the advice of his supervisor, who cautioned him against making over-bold claims, lest his finding not hold up to further investigation. But Jansky suspected that the signal originated in the center of the Milky Way galaxy, making it the first known detection of extraterrestrial radio signals.

His reasoning was simple. He studied that third type of static for over a year, and noted that it rose and fell once a day. At first, Jansky thought this meant it was radiation from the sun. But a few months later the brightest point of the signal moved away from the sun’s position. Furthermore, the rise and fall did not repeat exactly every 24 hours, but every 23 hours and 56 minutes — a property of fixed stars and other celestial objects beyond our solar system. The most likely source of the radiation, he concluded, was the center of the Milky Way, where the signal was strongest, in the constellation of Sagittarius.

As Cyril later recalled, “The scientist’s problem is to recognize basic facts even though they are obscured by a wealth of extraneous material, and then to apply creative imagination in their interpretation. This Karl Jansky did.”

The result was not one, but three published papers, including “Electrical disturbances apparently of extraterrestrial origin,” which he presented at a meeting of the International Scientific Radio Union in April 1933. This, in turn, led to a high-profile news story in The New York Times on May 5, 1933, trumpeting his discovery, and the University of Wisconsin finally awarded him his master’s degree based on the three papers. Jansky was keen to continue investigating these mysterious cosmic signals and wanted to build a 30-meter dish antenna for that purpose. But Bell Labs was more interested in applied research at the time — the height of the Great Depression. Since Jansky’s work showed the hissing static should not be problematic for transatlantic communications, they judged the project complete. Jansky was assigned to other projects. He remained at Bell Labs for the rest of his career, toiling in relative obscurity despite pioneering a new field of science, although he was elected as a fellow of the Institute of Radio Engineers in 1948.

That new field, radio astronomy, didn’t emerge overnight. The dire economy and Jansky’s lack of professional standing as an astronomer dissuaded various observatories from investing in further research. One key early figure was Grote Reber, who heard of Jansky’s discovery and built a radio telescope in his own backyard in 1937, using it to conduct the first systematic survey of cosmic radio waves.

The development of radar during World War II provided a boost to radio astronomy, such that after the war ended, another astronomer named John Kraus was able to start a radio observatory at Ohio State University. Kraus eventually wrote a textbook that became a bible for radio astronomers. By 1964, it was an established field — the year Arno Penzias and Robert Wilson used a giant horn antenna to discover the cosmic microwave background radiation.

Jansky died in 1950 at the age of 44, the result of a massive stroke stemming from his kidney disease. When that first 1933 paper was reprinted in Proceedings of the IEEE in 1984, the editors noted that Jansky’s work would mostly likely have won a Nobel prize, had the scientist not died so young. Today the “jansky” is the unit of measurement for radio wave intensity (flux density). A crater on the moon is named after him, and there is now a monument in his honor at the New Jersey site of his pivotal experiment. And of course there is the Very Large Array.

Jansky, C.M. Jr. “My brother Karl Jansky and his discovery of radio waves from beyond the Earth,” Cosmic Search 1(4). http://www.bigear.org/vol1no4/jansky.htm