June 1849: James Prescott Joule and the Mechanical Equivalent of Heat 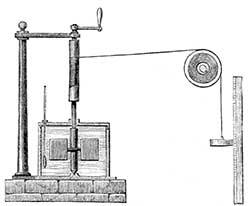 Engraving of Joule's apparatus for measuring the mechanical equivalent of heat, in which the energy from the falling weight on the right is converted into heat at the left, through stirring of water. 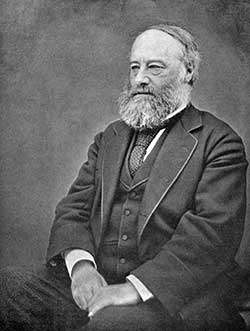 During the mid-1800s, many scientists accepted the caloric theory of heat, which considered heat to be a fluid that could neither be created nor destroyed and which flowed from warm bodies to cold ones. But an obscure home-schooled brewer’s son in the north of England, James Prescott Joule, was impressed by the celebrated cannon-boring experiments of Count Rumford, which showed that heat could be created continuously by the mechanical work of boring a cannon. He recognized that Rumford’s discovery needed to be quantified by an experimental determination of the mechanical equivalent of heat. Thus, this unlikely physicist, who had never had adult instruction or a single course in physics, began his careful experiments that would change the physics of energy. These experiments became the foundation of the First Law of Thermodynamics, the principle of conservation of energy, and the support of much of the energy technology of modern life.

Joule was born in 1818 in Salford, England, near where his family operated a brewery in Manchester. Working there in what was considered the scientific hinterland during much of his career, Joule was long ignored by the scientific establishment. He did not have formal schooling, but received some tutoring from scientist John Dalton, pioneer of the theory of atomic weights and the composition of molecules. As an adult Joule became the manager of the family business; he worked a full day making beer and then pursued his scientific investigations at the end of the day, as an avocation. [1]

He investigated the heat generated by many mechanical actions, including the stirring of water by a paddle, expansion of a gas into a vacuum, and the generation of heat by current flow in electrically conducting materials. The experiment that showed most directly the connection between mechanical action and heat involved the stirring of water by a paddle. He gave an extensive summary of this work in a report [2] to the Royal Society of London in June, 1849. In one design, the paddles, immersed in water, were mounted on a vertical shaft, rotated by a cord propelled by falling weights. The temperature increase of the water was of order one degree centigrade. The experiment required very careful control of the ambient conditions and corrections for extraneous heat flow. Some scientists were skeptical whether the experiments could be accurate enough, but, in the end, Joule’s work stood the test of time and was confirmed by others.

Combined with the results of other researchers, Joule’s determination of the mechanical equivalent of heat led to the First Law of Thermodynamics. The law, based on the idea of the conservation of energy, states that for a process in a defined system, the change in internal energy is equal to the amount of heat absorbed minus the work done. Joule recognized that, in a container that cannot exchange heat with the surroundings, if a gas is compressed, and then allowed to expand into a vacuum, the expanding gas does no work. Therefore, according to the First Law, the energy of an ideal gas would not change, nor would its temperature. His experiments showed this to be the case. However, small temperature changes do occur that were too small to be detected in his experiments.

This work came to the attention of Lord Kelvin, who joined Joule in a more sensitive experiment involving expansion of the gas through a porous plug. This experiment showed significant temperature changes that depended on the initial temperature and pressure. Later, these changes were understood to be due to the force between molecules. This was the Joule-Thomson experiment. When it was fully understood, it enabled the liquefaction of what were known as “permanent gases.” Liquefaction of gases is the basis of today’s multibillion-dollar industries of air conditioning and cryogenics.

By measuring current flow versus resistance in various materials, Joule established the P = I2R relation between resistance, current flow, and the rate of heat generated. This was not as easy as it looks today. Owing to the work of Georg Ohm, the concept of electrical resistance was just emerging, and electrical current was still a controversial idea. But, again, Joule was right about the physics before a consensus emerged. Down to our own time, electrical heating by current flow in a resistor has been both a bane and a bounty. Resistive heating improves daily life in our stoves, furnaces, irons, and other household conveniences, and underlies a multitude of industrial operations. At the same time, it steals power on the way from generating stations to users, and damages electronic circuits and electric motors. We can deal better with both bane and bounty because Joule quantified the physics.

After years of being ignored in his early life, he was finally honored by the scientific community in England and named to the presidency of the Literary and Philosophical Society. His honors spread to Europe and far beyond. “A crater on the moon has been named after him and a French submarine was named Joule; sadly, she was lost with her crew in the Dardanelles in 1915” [3]. More than one hundred fifty years after the work was done, his name lives on in the physics community around the world. His initial, J, is the symbol for the unit of energy in the SI system. The P = I2R relation is known as Joule’s Law.

Joule passed away in 1889 at his home not far from his birthplace. An epitaph for another gentleman-scientist, Benjamin Franklin, said “He seized the lightning from the sky and the scepter from tyrants.” When James Prescott Joule bypassed the caloric theory and determined the mechanical equivalent of heat, it could be said that “He seized the heat from darkness and the work from isolation.”

The author is a regular contributor to This Month in Physics History.