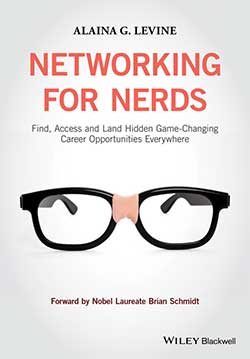 APS News contributing correspondent Alaina G. Levine is the author of a new book, Networking for Nerds, that draws upon her experience in science and communication to advise and guide researchers in the care and feeding of their careers as part of scientific collaboration. From graduate students to senior researchers, Networking for Nerds offers tips for everyone. Levine goes into detail about myths surrounding networking, how to articulate your skills and expertise, whom to network with, and how to make best use of social media. In his introduction to the book, Nobel Laureate Brian Schmidt says “Networking is an important part of the scientific process and, therefore, doing it well is an important part of being a successful scientist. The innate skills each of us has in networking vary widely, but as with other skills, most of us can improve with training. This book is all about the basic skills you need to learn to better communicate with your colleagues.”

Networking for Nerds by Alaina G. Levine, published by John Wiley & Sons, will be released on July 13, 2015.