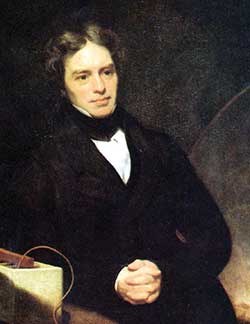 Portrait of Michael Faraday painted by Thomas Phillips in 1842.

The eminent 19th-century scientist Humphrey Davy is known for many things, including the discovery of the elements barium, strontium, sodium, potassium, calcium, and magnesium. But it has often been said that his one-time laboratory assistant, Michael Faraday, was Davy’s greatest discovery. The young man went on to conduct a series of some of the most seminal experiments in electromagnetism.

Born in 1791, Faraday’s father was a blacksmith, and the family lived in poverty. Young Michael received only the most rudimentary early education, but when he was 14, he was apprenticed to a local bookbinder and bookseller named George Reibau. That gave him access to scores of books, and he read voraciously for the next seven years, developing a particularly strong interest in science and the latest discoveries in electricity.

Serendipitously, as his apprenticeship was ending, a friend gave him a ticket to a lecture on electrochemistry by Davy at the Royal Institution — not a venue where the young humble-born Faraday would normally be welcomed. Faraday was entranced, and after the lecture he asked Davy for a job. There wasn’t a position available, Davy gently told the young man, but shortly thereafter he sacked his assistant for brawling and hired Faraday to take the man’s place.

Faraday was not considered a “gentleman” by the standards of the day. In fact, when Davy and his wife toured the continent from 1813 - 1815, Faraday was supposed to accompany them as Davy’s scientific assistant — except when Davy’s valet declined to go, Faraday was forced to step in, with Davy’s wife insisting that he eat with the servants and travel outside the coach. He endured these indignities, and proved an able assistant, discovering two new compounds of chlorine and carbon, and successfully liquefying various gases.

In 1820, news reached England of Danish scientist Hans Christian Oersted’s experiment demonstrating that an electric current in a wire can deflect a compass needle. Faraday enthusiastically dove into designing his own experiments, hoping to prove that not just electricity and magnetism, but all natural forces were somehow linked. He is best known for his demonstrations of the underlying principles behind electric motors and generators, as well as the magneto-optical effect.

But he also performed groundbreaking experiments on electrostatic charge. For instance, when he wanted to prove that the charge on a conductor resides on the exterior surface and doesn’t influence anything enclosed within it, Faraday built a small room inside his laboratory and covered it with metal foil. Then he connected the foil to a high-voltage generator. He monitored the effects with an electroscope, and demonstrated that the electric charge never penetrated into the interior of the makeshift room.

Seven years later, Faraday built on that earlier work with his famous ice-pail experiment to demonstrate the effects of electrostatic induction. He insulated the metal pail from the ground by placing it on a wooden stool, and then took a page from Benjamin Franklin’s experimental book by lowering a charged metal ball into the pail with a nonconducting silk thread, being careful not to let the ball touch any part of the pail.

Faraday described these results in a letter to Richard Phillips, editor of the Philosophical Journal, who published the correspondence in the journal a year later in March 1844. Various versions of the experiment are still performed today for demonstration purposes, although it usually involves a hollow metal sphere instead of a pail, and a modern electrometer instead of an electroscope.

Faraday suffered a nervous breakdown in 1839, although he recovered sufficiently to continue his experiments into electromagnetism. For much of his life, he eschewed worldly honors, turning down a knighthood and twice refusing to become president of the Royal Society. During the Crimean War, he was asked to advise the British government on the production of chemical weapons; the staunchly religious Faraday refused on ethical grounds. On August 25, 1867, he died at home in Hampton Court at the age of 75.

This self-educated blackmith’s son left an indelible mark on physics. The unit of electrical capacitance is named the farad in his honor. Albert Einstein purportedly included a picture of Faraday on his wall, with the likes of Isaac Newton and James Clerk Maxwell. No less a luminary than Ernest Rutherford paid tribute to his genius by declaring, “When we consider the magnitude and extent of his discoveries and their influence on the progress of science and of industry, there is no honour too great to pay to the memory of Faraday, one of the greatest scientific discoverers of all time.”

Editor's note: This article was revised on April 5, 2016, to correctly state the nationality of Christian Oersted.