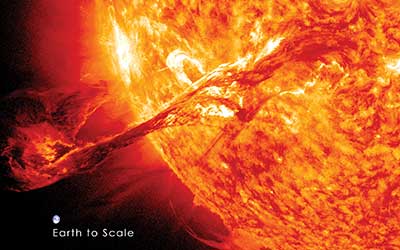 Huge solar coronal mass ejections hurl plasma into space. These cause space storms that can wreak havoc on Earth.

Auroras lit the skies as far south as Cuba on September 1, 1859. Telegraph systems across the globe malfunctioned, sparking and shocking their operators, and making transmission impossible. The cause was a massive geomagnetic storm, known as the Carrington Event after astronomer Richard Carrington, who observed an enormous solar flare preceding the events on Earth.

If a storm of equal strength occurred in today’s technology-addicted world, it would have catastrophic impacts, said a panel of space weather experts at the American Association for the Advancement of Science (AAAS) Meeting in Washington, DC on February 15.

“This was by all measures a huge storm,” said Daniel Baker of the University of Colorado. “If an event of that size were to occur today, the effects by most estimates would be devastating.” Large regions of the globe could be plunged into darkness and hobbled with technology failures, from widespread power outages, to loss of communication systems, to GPS navigation failures, and damage to satellites.

Blasts of plasma hurled from the Sun, known as coronal mass ejections, can cause geomagnetic storms if the eruption is directed at Earth. Coronal mass ejections can fling billions of tons of material at speeds reaching millions of miles an hour, making them capable of traveling the distance to Earth in as little as half a day.

Just this kind of blast occurred in July 2012 — a powerful coronal mass ejection, which was observed by NASA’s STEREO A spacecraft. Had it hit Earth, the resulting storm may have been even stronger than the Carrington event. Luckily for humanity, it missed — but by only a slim margin. “If this event had occurred just a few days earlier, as the Earth was in the line of fire,” said Baker, “I’ve contended that we would still be picking up the pieces.”

Geomagnetic storms can induce currents in power lines, wreaking havoc with the electrical grid, and potentially burning out transformers. An extreme solar storm could cause the loss of hundreds of house-sized transformers, Baker said. Such transformers are difficult and expensive to replace, and power outages could stretch out for weeks, months, or even years, Baker said, as damaged equipment is restored and the grid is brought back up. Recovery costs have been estimated to run into the trillions of dollars.

The storms can disrupt high-frequency radio communications, radar and GPS, causing headaches for industries that rely on these technologies, like airlines. In November 2015, flights in Sweden disappeared from air traffic control screens during a geomagnetic storm. “Is it possible that an event like this can happen in the U.S.? We’re not so sure,” said Bill Murtagh, Director for Space Weather at the White House Office of Science and Technology Policy. “We’ve got to be able to answer that question. ... A loss of our air traffic control over the United States for any number of hours will quickly result in impacts of hundreds of millions of dollars, and severe disruption to our economy.”

Scientists are working to predict the chances of a catastrophic storm hitting Earth. Pete Riley of Predictive Science, a space weather research company, pegs the probability of a Carrington-strength event or worse over the next decade at around ten percent. But, he said during the AAAS session, “There are large uncertainties associated with that number, and that is at least an equally important message to communicate as the actual value itself.”

The severity of storms can be ranked by an index of geomagnetic activity known as the disturbance storm time index (Dst). To make their estimate, Riley and colleagues fit the observed storm Dst data to a variety of models — including power law, log-normal, and stretched exponential distributions — to calculate the probability of an extreme storm. For the power law distribution, they found a 10 percent probability of a strong storm within the next decade, but when uncertainties are considered, this number could range from 1 to 19 percent probability, and the numbers vary with different distributions.

The dire warnings about such events convinced Washington to take notice, said Murtagh. “For someone to suggest we could have power outage for an extended period, as in months, in a large part of this nation, that changed the picture, that changed the landscape altogether.”

As a result, in November 2014, the National Science and Technology Council (NSTC) established the Space Weather Operations, Research, and Mitigation (SWORM) Task Force to develop a space weather preparedness strategy.

The need to understand space weather reaches well beyond the typical science policy players (like NASA, the National Science Foundation, and the National Oceanic and Atmospheric Administration) to the Department of Homeland Security, the Federal Emergency Management Agency, and the National Security Council, among others. “It was clear to everybody that we needed a cohesive all-of-government strategy to ensure the federal government was positioned to manage these big space weather events,” said Murtagh.

In October 2015, NSTC released the National Space Weather Strategy and National Space Weather Action Plan developed by SWORM. The first document lays out six goals: understand the magnitude and frequency of space weather events, fortify the country’s capability to recover after geomagnetic storms, prepare for and protect against their effects, refine predictions of their potential impacts on infrastructure, improve the understanding and forecasting of space weather events, and increase international cooperation. The action plan lays out specific steps for agencies to take towards reaching these goals.

All this will cost money, of course. A recent decadal survey from the National Academies suggests that $100 million per year should be spent on space weather over the next ten years. President Obama’s 2017 budget request includes $10 million for NASA’s support of the space weather action plan.