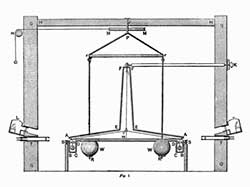 Henry Cavendish started the search for an accurate measurement of big G with his torsion balance in 1798, shown here in a drawing from his paper reporting the results.

APS April Meeting 2016 — The gravitational constant, also known as “Big G”, is a bit of a black eye for physics. While precision measurements have enabled physicists to add ever more decimal points to most fundamental constants, G is barely known better today than it was more than two centuries ago, and at times its uncertainty has gone up instead of down. Currently, G is known to only around 47 parts per million, according to the International Council for Science’s Committee on Data for Science and Technology (CODATA), making it the fundamental constant with the largest uncertainty.

In an invited session at the APS April Meeting 2016, presenters reviewed past attempts to measure the constant and shared ideas for breaking the impasse. Physicists from all fields were urged to contribute to the effort by applying to participate in a National Science Foundation-sponsored “Ideas Lab,” a new initiative for funding innovative research.

Isaac Newton introduced G in 1687 with his law of universal gravitation. But the first person to attempt to measure G was Henry Cavendish in 1798. He designed a torsion balance in which two small “test masses” are suspended from a wire that is then gently twisted, and the gravitational attraction between each of those masses and two much larger “source masses” are pitted against the wire’s restoring force. The torsion balance is “one of the greatest ideas” for measuring the gravitational constant, said Stephan Schlamminger of the National Institute of Standards and Technology (NIST). “It brought physics a big step forward.” And augmented by electronic control systems, it remains the state of the art for precision gravity experiments.

It’s not that people haven’t tried other things. Schlamminger described various experiments using pendulums and balance beams, but none have improved over the torsion balance. Gravity is very weak relative to other forces, Schlamminger explained, and experiments cannot be shielded from outside gravitational influences.

Recent developments in cooling and trapping of atoms have enabled new approaches to the old problem, however. Guglielmo Tino of the University of Florence in Italy described a method known as “accurate measurement of G by atom interferometry,” or by its Italian acronym MAGIA. Tino and his colleagues put rubidium atoms in two different quantum states with different momentums and tossed them up vertically in the presence of source masses. They then used the falling atoms’ interference patterns to determine their accelerations, and ultimately derive a value for G.

Atoms provide natural advantages, Tino said: Their masses are known to high accuracy, and their positions can be measured very precisely using lasers. But he admitted that, compared to the torsion balance (described by Cavendish as “very simple”), “the MAGIA apparatus is not very simple,” requiring high vacuum and precisely tuned lasers. Tino’s team published a result in 2014 with an uncertainty of 150 parts per million — relatively large but within striking distance of torsion balance results. He thinks he can improve his experiment and further reduce the uncertainty by one or possibly even two orders of magnitude.

Christian Rothleitner of the Physikalisch-Technische Bundesanstalt in Germany proposed measuring the gravitational constant by simultaneously dropping three corner-cube reflectors as test masses, and measuring their gravitational accelerations using a laser interferometer. The setup would eliminate many sources of error present in other free-fall experiments, such as the moon and sun’s changing tidal influences and the gradient in Earth’s gravitational field. A prototype of Rothleitner’s proposed device has been built at the University of Luxembourg, and all that’s missing is funding to carry out the experiment, he said.

The problems with G go beyond large uncertainties, Schlamminger said. Some G-measuring experiments also disagree with each other and with the CODATA value. That suggests undiscovered systematic errors, and an International Union of Pure and Applied Physics working group is coordinating an effort to have labs around the world ship experimental setups to each other and repeat each other’s experiments, to better understand and hopefully reduce such errors. The first such repetition is in preparation at NIST.

But entirely new experimental approaches are also needed, Schlamminger added, especially from those outside the gravity research community. He urged all physicists help “reinvigorate the field” by applying to NSF’s Ideas Lab. “Measuring Big G is a great thing to do at a small institution, because you only need a tabletop experiment,” Schlamminger said. “It’s metrology, it’s fun and you learn a lot.”

Preliminary proposals are due May 16, and “ideas should be risky,” Schlamminger added. “They should not be ones that will work for sure, because then someone will have already tried it.”