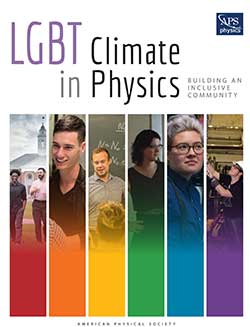 APS April Meeting 2016 — While presenting the survey results of the APS report LGBT Climate in Physics, Elena Long mentioned that she can’t fly through North Carolina anymore. “I can’t use the Charlotte airport anymore because I could be arrested for using the restroom between my flights,” said Long, a postdoc who works in nuclear research at the University of New Hampshire.

The reason? Long identifies as transgender, and North Carolina passed a law this March that requires transgender people to use public bathrooms that correspond to the sex on their birth certificates, instead of the gender with which they identify. Beyond airport layovers, transgender physicists like Long wouldn’t be able to safely attend conferences in North Carolina without careful planning by APS.

And it is now a practical issue: APS is planning to hold its Division of Atomic, Molecular, and Optical Physics (DAMOP) meeting in Charlotte, North Carolina, in 2018.

The tricky part is that conference scheduling happens on long timescales, whereas legislation moves quickly. For big conferences, APS negotiates contracts with hotels and convention centers up to six or seven years in advance, said Kate Kirby, the chief executive officer of APS.

“When states suddenly adopt a law that is [discriminates against] particular groups, that puts us in a terrible situation,” Kirby said. “Cancelling these contracts can cost a lot of money, hundreds of thousands of dollars. But I also don’t like the idea of holding our meetings in a state where [participants] might feel uncomfortable.”

In addition, it’s hard to say whether the North Carolina law will still exist by the time the 2018 DAMOP meeting rolls around. Kirby pointed out that the vocal opposition from business leaders across the country has had some success in striking down these laws. For example, in March, the governor of Georgia vetoed that state’s anti-LGBT (lesbian, gay, bisexual, and transgender) bill largely because of pressure from the business community. Advocacy groups such as the American Civil Liberties Union are also challenging the North Carolina law in court.

“I think we just have to look at it really carefully,” Kirby said. “We could decide we can’t do [DAMOP] in North Carolina, and then the whole thing gets repealed.”

But other states also have similar discriminatory laws. In April, Mississippi governor Phil Bryant signed into law a bill that allows businesses to deny services to anyone who offends “sincerely held religious beliefs and moral convictions,” he wrote in a statement. Opponents of the law say that it uses the pretext of religious protection to discriminate against the LGBT community. Legislators in Indiana, Massachusetts, Virginia, and Washington have also introduced bills that would limit transgender access to bathrooms.

Hannah LeTourneau, a recent physics graduate who attended the session and identifies as queer, acknowledges APS’s logistical challenges in conference planning. But “people shouldn’t need to be worried about [where to go to the bathroom] when they go to professional conferences,” said LeTourneau, who works as an engineer for the Axion Dark Matter Experiment at the University of Washington.

However, conference venues may have ways to work around the bathroom laws. One possibility, Long said, is to arrange in advance for the facility to designate temporary gender-neutral bathrooms.

Conference attendance isn’t the only issue facing LGBT physicists. “All of these considerations — it’s a mess,” Long said. “Particularly as a young career physicist trying to figure out where I want to go, hopefully for a tenure track position ... it’s hard to figure out what state I can actually live in.”

A discussion about conference planning followed Long’s presentation about the LGBT Climate in Physics report, which was published in March 2016 by the ad hoc APS Committee on LGBT Issues. The committee used survey responses from 324 LGBT physicists, most of whom work in academia, and found that over one-third of respondents considered leaving their workplace or school in the past year.

While they found that attitudes about LGBT vary from site to site, the committee also found that 40 percent of respondents felt pressured to hide their sexuality, and over 20 percent reported experiencing exclusionary behavior such as sexual harassment, homophobic comments, or expectations of incompetence.

Long also pointed out specific challenges facing transgender physicists, such as a lack of health benefits and being forced to “out” themselves on a CV because they are unable to change their names on publications accepted before their transition.

In the report, the committee recommended that APS establish a Forum on Diversity and Inclusion, to be launched by the lgbt+ Physicists grassroots group, the APS Committee on the Status of Women in Physics, and the APS Committee on Minorities in Physics. It’s important for all three groups to work together, Long said, because their report found that someone who falls under multiple disadvantaged identities — for example, an LGBT physicist who is also a racial minority, a woman, or disabled — encounters the most discrimination. “A lot of those people can’t separate where the harassment is coming from,” Long said. She said that it makes more sense for the three groups to approach these cases collectively.

The forum may organize sessions at conferences, Long said, and also work on figuring out how to update transgender physicists’ names on publications. She hopes to encourage more senior physicists to be involved. More broadly, the report says,the Forum would work broadly to advance diversity and inclusion of all historically marginalized groups in physics.

The APS Council has formally endorsed the report, which contains a number of recommendations for developing advocacy efforts and implementing LGBT-inclusive mentoring programs. “Work has already begun, for example, with the APS Code of Conduct at meetings” Kirby said. “APS staff will now seek to respond to the other recommendations.”

Sophia Chen is a freelance writer based in Tucson, Arizona.