One of the strangest historical tragedies of 20th century America is the Great Boston Molasses Flood of 1919, when tons of treacle from a burst storage tank coursed through the city’s streets. The incident reveals some fascinating fluid dynamics, according to a presentation at the annual meeting of the APS Division of Fluid Dynamics in November 2016.

The owner of the faulty tank was the Purity Distilling Company. At that time, molasses was a vital commodity, not just because it could be fermented to make rum and ethanol, but also for its use in making munitions as World War I raged in Europe. Located in the North End of Boston, the tank was built hastily because of the war, with rather loose regard for safety regulations. Most notably, it was never filled to capacity to test for leakage, prior to being used to store molasses. Not surprisingly, the tank leaked from the start, showing brownish-red stains in stark contrast to the original blue paint job. Some people even collected the leaked molasses for their personal use. When a few local residents finally complained, the company painted the tank to match the stains, in order to camouflage the leaks.

In hindsight, a catastrophic failure was inevitable, and disaster struck on the afternoon of January 15, 1919. Witnesses heard a roar, a rumbling sound, and then a crash and a loud bang. The the tank — which had just been filled to near capacity a few days before — had collapsed under the strain, and 8.7 million liters of molasses rushed into the streets of Boston, peaking in height at 27 meters and flowing as fast as 56 kilometers per hour.

The onslaught was sufficiently powerful to flatten several buildings and do significant damage to the girders of the nearby elevated train. People caught in the flow struggled waist-deep in the molasses, and contemporary newspaper accounts describe people being picked up and hurled several feet, crushed by and drowned in molasses. Others succumbed to injuries and infections in the subsequent weeks.

All told, the flood killed 21 people (along with several horses) and injured 150 others. Rescue efforts were undertaken by several cadets from the USS Nantucket, which was docked at a local pier, as well as police officers, the Red Cross, and Army and Navy personnel in the area. Survivors were taken to a makeshift hospital, although the rescuers struggled to reach victims in time because of the difficulty of wading through the molasses. It took weeks to clean up the mess, using salt water to wash the stuff away and sand to absorb any remaining behind. Even so, people had tracked molasses through adjacent streets, subways, pay phones, streetcars, even into their homes.

Boston residents sued Purity Distilling’s parent company, the United States Industrial Alcohol Company, which initially claimed that the flood had occurred because anarchists had blown up the tank as an act of terror. This initially seemed plausible, given how fast the molasses spread through the streets. But investigators concluded this was baseless. In the end, the courts found the company responsible, with survivors of the victims receiving roughly $7,000 each as compensation for their loss. And two decades later, physicists discovered that gravity acting on the viscous fluid provided sufficient driving force to account for the speed of the molasses.

Several factors contributed to the bursting of the tank. Some hypothesized that the fermentation process caused carbon dioxide to build up inside the tank, until its rivets burst. Alternatively, a 2014 structural engineering analysis by Ronald Mayville found that steel used to make the tank was half as thick as it should have been, given its size, and also was far more brittle than modern steel because of the absence of manganese. Furthermore, the rivet holes were not reinforced, making them more likely to deteriorate under stress.

Yet nobody had really studied the fluid dynamics of how the molasses behaved during the flood until aerospace-engineer-turned-science-communicator Nicole Sharp teamed up last year with Harvard graduate students Jordan Kennedy and Shmuel Rubinstein to conduct rheological studies of the substance and model the resulting data. Then they compared the models’ predictions with historical accounts of the actual flood. And those predictions matched reasonably well with the details Sharp et al. gleaned from the archives.

By doing so, they gained some insight into highly viscous spreading flows. Molasses typically falls into the category of a shear-thinning non-Newtonian fluid, but Sharp et al. decided to use classical fluid models for their study because at sufficiently cold temperatures — like those on that fateful January day in Boston — it behaves more like a classical fluid. In other words, temperature has more of an effect on the viscosity of molasses at very cold temperatures than deformation. Additional research should shed light on likely convective mixing between warm and cold molasses inside the storage tank just prior to the structural failure, which may have also contributed to the accident.

Sharp believes that understanding the physics of the Great Molasses Flood could provide insight onto other structural failures, such as breached levees or industrial spills. But the flood is also a useful interdisciplinary educational tool, incorporating fluid dynamics, structural mechanics, and engineering, in addition to history, ethics, and law. "We hope that, by shedding some light on the physics of a fascinating and surreal historical event, we can inspire a greater appreciation for fluid dynamics among out students and the public," said Sharp.

Sharp, Nicole; Kennedy, Jordan; and Rubinstein, Shmuel. 2016. In a sea of sticky molasses: The physics of the Boston Molasses Flood, Bulletin of the American Physical Society, Abstract L27.00008. 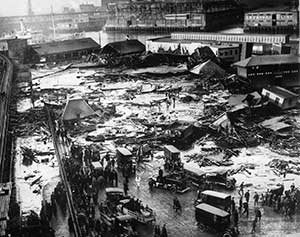 Aftermath of the rupture of a tank of molasses in Boston, January 15, 1919. 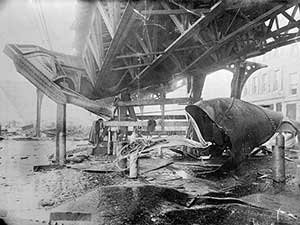 The rushing wall of molasses carried enough force to damage a nearby elevated railroad.