Several groups presented their research on swimming creatures at the APS Division of Fluid Dynamics annual meeting last November in Portland, Oregon. Two of these studies — one on how schooling fish save energy and the other on a dolphin learning to swim with a prosthetic tail — show that there is rich physics in how animals move through the water.

The Benefits of Schooling

Many fish such as sardines and snapper swim together in tight-knit groups. This schooling behavior may reduce drag and help the animals evade predators. Researchers from the Massachusetts Institute of Technology (MIT) shared new simulations of how schooling fish might be able to move more efficiently by sensing and using vortices shed by other fish.

The team of engineers ran computer simulations of two fish swimming one after the other in a line. The lead fish created a wake as it swam, and the researchers investigated how the rear fish, sensing that water movement, could theoretically undulate its body to optimize its forward momentum.

Biologists have shown that fish are able to sense local perturbations in the water. Most fish have a "lateral line" running along their sides, a unique sensory organ containing neuromasts, which are made up of mechanosensory hair cells similar to those in our ears. A pressure gradient across the body of the fish causes the neuromasts to bend very slightly, which the fish can perceive. "Using just this signal, fish can identify small vibrations from prey and even localize where their prey are," said Amy Gao, a graduate student involved in the research at the Tow Tank Laboratory at MIT. "You can’t sneak up on a fish."

Using numerical simulations, Gao and her collaborators showed that this ability to sense the local flow allowed the rear fish to essentially slalom around the vortices shed by the lead fish. "The rear fish adjusts its motion to take advantage of vortices along its entire body," explained Gao. The researchers demonstrated that, at least in theory, schooling fish can use information from their lateral lines to expend less energy.

The team hopes that this work might lead to underwater vehicles having "smart skins" with sensors akin to a fish’s neuromasts. In dark or murky waters, typical light-based sensors are not useful, and a vehicle that could perceive and respond to changes in water pressure would still be able to navigate. "This kind of information will make it possible for manmade vehicles to avoid obstacles and operate stably in areas that are currently very dangerous, such as in surf and shipwreck zones," said Gao. That's good news considering that the deep ocean is one of our planet’s most unexplored ecosystems.

Hundreds of thousands of whales, dolphins, and porpoises die each year after becoming snared in fishing traps and lines, but Winter was one of the lucky ones. The female Atlantic bottlenose dolphin was entangled in a crab trap line near Cape Canaveral, and a fisherman spotted her and called an animal rescue team.

Winter survived, but the accident had cut off circulation to the two-month-old’s tail, and it could not be saved. The dolphin amputee now lives at an aquarium in Florida, and marine veterinarians have outfitted her with a prosthetic tail. At the APS meeting, physicists shared new results of a hydrodynamic study of Winter swimming with her prosthesis.

Without her prosthetic tail, Winter tends to move her body side to side to propel herself forward, unlike able-bodied dolphins that move up and down. "When Winter lost her tail, she lost her ability to undulate from top to bottom and adopted a side-to-side undulation," explained Ayodeji Toluwanimi Bode-Oke, a graduate student in the Mechanical and Aerospace Engineering department at the University of Virginia, who was involved in the research. This unnatural movement stresses Winter’s spine, and she has begun to show early signs of scoliosis.

The research team analyzed videos of Winter wearing her prosthesis and modeled her movements in three dimensions. By outfitting Winter with a prosthetic tail, her trainers at Clearwater Marine Aquarium are slowly retraining her to swim like a dolphin.

Bode-Oke and his collaborators studied Winter’s wake patterns as she flapped her prosthetic tail up and down. The researchers showed that only the downstroke of Winter’s tail propelled her forward. Able-bodied dolphins — like Winter’s pool-mate Hope — propel themselves on both the downstroke and upstroke of their tails. But in Winter’s case, the upward movement of her tail was actually holding her back. "The upstroke causes drag that almost cancels out the thrust production in the downstroke," explained Bode-Oke. "Winter consumes twice the power and produces one quarter the thrust of a normal dolphin over the course of each flapping stroke."

In order to test how Winter’s increased drag affected her movement, the scientists calculated Winter’s stride length — her forward movement in one flapping motion of her tail, relative to her body length. They determined a value of about 0.35, far less than that of healthy dolphins, which have stride lengths of 0.80 – 0.90. Bode-Oke and his colleagues hypothesize that Winter’s curved body shape, caused by her scoliosis, might be preventing the dolphin from swimming as efficiently as Hope.

These hydrodynamic analyses will be useful for designing new versions of Winter’s prosthesis, Bode-Oke says. For now, the dolphin is happy to consume handfuls of capelin and silversides, her two favorite kinds of fish, as the scientists do their work.

The author is a freelance science writer based in Portland, Oregon. 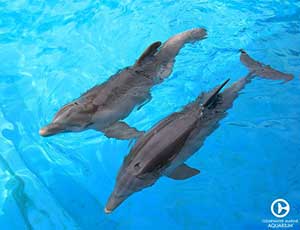 Winter (left), a dophin that lost her tail after being caught in a net, swims with poolmate Hope at the Clearwater Aquarium in Florida.