A new series of topical workshops hosted by the editors of the Physical Review kicks off with materials design and discovery. 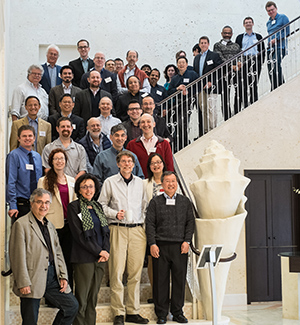 Editor in Chief Pierre Meystre and the editors of the Physical Review journals hosted the first "Physics Next" workshop on materials design and discovery (May 15-17, 2017).

Bernd Matthias, a physicist who discovered hundreds of superconducting compounds over the course of his career, famously credited his success to some basic "rules." Among these were: avoid oxygen and magnetism, stick to highly symmetric crystal structures, and stay away from theorists.

That last rule is one that Darrell Schlom, who studies the properties of oxide materials at Cornell University, says he finds himself breaking a lot these days.

Schlom was speaking in May at a workshop on materials design and discovery, where theorists and experimentalists had gathered to discuss collaborating in the hunt for new or improved materials — for solar cells, quantum computers, and many other applications. Hosted by the editors of the Physical Review journals at a hotel in Riverhead, New York, the three-day meeting was the first in a new series of workshops called "Physics Next."

APS Editor in Chief Pierre Meystre says he started these informal meetings to encourage better communication between scientists in emerging research areas, and to give editors more opportunities to meet the key players in these fields.

"We really want to make sure that when fields get 'above the noise,' we know about it," he said in his welcoming remarks.

The detective work to find new materials has typically played out in the lab. But theorists have scored several high-profile predictions. For example, researchers calculated in 2014 that a compound of hydrogen and sulfur under pressure would superconduct at relatively high temperatures, which experimentalists observed a year later.

Giulia Galli, a theorist at the University of Chicago and one of the organizers of the workshop, believes that by following a common strategy theorists and experimentalists will have more success discovering exciting materials. That's one of the reasons she and her co-organizer Mercouri Kanatzidis, a chemist at Northwestern University, invited roughly equal numbers of theorists and experimentalists. Such a mixture is rare, said Kanatzidis, and he hopes that such meetings will connect scientists who specialize in theory, synthesis, or characterization.

Most of the roughly 30 scientists in attendance gave short overview talks. To name but a few, Andrew Millis of Columbia University highlighted how researchers are improving the treatment of electron correlations in computations that describe real materials; Efrain Rodriguez of the University of Maryland described new x-ray techniques for monitoring solid-state reactions; and Paul Canfield of Iowa State University and Ames Laboratory recounted stories from his career of sniffing out interesting materials from the infinite number of possibilities that chemistry allows.

By design the workshop had the relaxed feel of a Gordon conference. From the meeting room, attendees could gaze out the window at boats bobbing in the Peconic river, all of the meals were taken together, and there were long breaks for excursions and informal conversation.

There was also time between talks for group discussions. At one such discussion, Paul Kent of Oak Ridge National Laboratory in Tennessee, who uses simulations to predict material properties, launched a lively debate over the value of studying materials that are not stable under normal conditions. Andrew Rappe, a theoretical chemist from the University of Pennsylvania, argued that researchers shouldn’t disregard hypothetical materials. "You can discover interesting physical relationships in materials that can’t be made," he said, "even if they're explosive."

But Canfield was a strong advocate for better vetting of theoretical materials, noting that he'd "burnt off bits of his facial hair" chasing unstable materials in the lab. Schlom, however, said that he finds it useful to know about "slightly metastable" materials, since such materials might be stabilized by an underlying substrate.

Meystre says he hopes for more such discussions at future meetings. Upcoming workshops include applications of quantum-field theory and string theory in condensed matter, scheduled for August 2017, and the physics of active matter, planned for the spring of 2018.

The author is Editor of Physics.