Through Creative Philanthropy, the Braslau Family Honors Loved Ones and Supports Students in Need

When David Braslau’s brother, Norman died in 1996, David began thinking of how to honor him in a way that would make a real impact on people’s lives. "I wanted to endow an APS prize or something for him," he says. "He was a Ph.D. physicist with a long and impactful career at IBM, making some significant scientific contributions." But, Braslau says, "I also felt that all the same people win the prizes, and that sort of annoys me, so I wanted to do something different, although at the time I didn’t pursue it."

Then when his brother Bob, an aerospace engineer who worked on the Apollo program, passed away in 2014, David says the idea of a memorial for his brothers gained momentum. "I met with Ted Hodapp [then director of education and diversity programs at APS] and Darlene Logan [then director of development] and I said I wanted to contribute something besides a prize," he says. A travel grant program was an ideal solution.

The Braslau Family Travel Grant Endowment provides funding for low-income physics students to travel to APS meetings. During its first year of operation, grants have been awarded to six physics students, each receiving about $1100 for travel and lodging. These students, who would otherwise be unable to attend the conferences, were able to give talks and meet other physicists.

Like his brothers, David followed his scientific and technical interests. He received his undergraduate degree in civil engineering from MIT and a Masters and Ph.D. in structural and engineering mechanics from UC Berkeley. Braslau wanted to try teaching, so he became a geophysics professor at the University of Minnesota but became more interested in the challenges of acoustics and aircraft noise. This led to his founding David Braslau Associates, Inc., in 1971 to work on transportation and industrial noise, blast wave analysis, and building acoustics.

Braslau says that initiating the travel grant program is a way to remember his brothers but also to help disadvantaged students. "I recently got a nice letter thanking the Braslau family for travel support," he says. "I’m not interested in just being a benefactor; I am interested in long-term results."

If you too would like to make a difference in the lives of others, please contact APS Director of Development Irene Lukoff (lukoff@aps.org) to explore ways you can help. 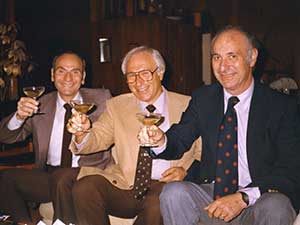