Change is in the Air

As I sat in my car in total frustration at the horrific traffic jam on my way to a battery conference, my mind wandered to a fantasy from my youth: flying cars. The Dick Tracy two-way wristwatch-radio became reality with the first Apple Watch. Why not flying cars?

There have been many attempts. One 1947 flying car looked like a Cessna glued to a Ford Pinto: the Convair Model 118. There is little interest at the moment in a car that flies, and, as long as it uses lift, it would require an airport runway. But while I was en route from Berkeley to San Jose to attend "Beyond Lithium Ion (BLI) X" at IBM Research-Almaden, the thought of leaping over the traffic stuck on I-880 reinforced my dream of flying right over the traffic jam.

When I finally got to BLI-X, I found the mood more upbeat and optimistic than in recent years, as progress will likely result in batteries that have a higher energy-storage density, are less expensive and possibly safer, and will likely allow new applications. I was particularly intrigued by the prospect of a new battery chemistry: lithium/sulfur. But my mind kept returning to the traffic jam I had negotiated and musing about flying over it.

Helicopters are far too expensive and noisy to be a viable option for most of us. Flying cars might be a pipe dream, but vertical-take-off-and-landing (VTOL) planes could be an alternative. A VTOL craft could take off and land at a small local "vertiport." Making the plane electric and powered by batteries will eliminate carbon-dioxide production if electricity from a green grid is used. Of course, the problem of going to and from the vertiport remains.

The uber-disruptive company Uber says it has a solution. It has proposed a summon-on-demand service using battery-powered VTOL air taxis, which it intends to deploy as soon as 2020. The company is optimistic, even though several critical components are missing or still in early stages of development.

A key component is a suitable battery. Batteries that can power such a plane and be quickly recharged do not exist due to insufficient specific energy (energy per unit weight), low charging rate, poor cycle life, and cost. A German company — Lilium — along with other companies are working on a demonstration electric VTOL plane, but it is a long way from certification and production.

There are a host of other obstacles that must be overcome: Pilots must be trained, and even without pilots, government approved autonomous flight-control software will eventually be necessary; infrastructure needs for takeoff/landing/recharging/air-traffic control must be met; battery safety in aircraft (certain phones are not allowed on commercial flights today due to the risk of battery fires) must be addressed; and a clear business model must be developed. Convincing customers to board a plane with huge batteries could be a problem. Noise at urban vertiports will likely meet with opposition. And costs could be in the stratosphere.

The low energy-storage density of batteries and thus their weight is an issue; however, electric motors are greatly more efficient than internal-combustion or jet engines, and they are more quiet as well. This efficiency is used to good effect in the present generation of electric cars.

NASA is exploring electric planes. Engineers point out that electric motors are much smaller and lighter than jet engines, allowing them to be integrated into the fuselage rather than having them hang under a wing. The result would be improved propulsion-airframe integration and operational efficiency. Unfortunately, present batteries do not store enough energy to power an electric plane over a useful distance. NASA is developing the X-57, a plane with 14 electric motors turning propellers and set into a uniquely-designed wing.

A battery-powered VTOL plane illustrates some of the challenges that product designers face in the 21st century. Better, cheaper energy storage is required to make many such products feasible. It is important for expanding the use of wind and solar energy sources, which are of little use when clouds block the sun or the wind is not blowing.

The optimistic mood at BLI-X was due in large measure to two recent developments.

(1) All-solid-state batteries, where the conventional flammable liquid organic electrolytes are replaced with solid materials, will reduce or eliminate the fire hazard for batteries. Ceramics and glasses are contenders, although more development is necessary.

(2) Batteries with a lithium (Li)-metal anode and a cathode containing primarily sulfur (S) may become feasible. A Li/S battery would have an energy density twice today’s Li-ion batteries with potentially increased safety when a solid electrolyte is employed, and reduced material cost. Lithium metal reacts violently with water, which should be possible only in the event of serious physical damage; or fire could occur if a cell shorts due to growth of a dendrite.

Li/S batteries still have some challenges in cycle life and high-rate manufacturing but look very promising. If these challenges can be overcome, Li/S would be the first significant new battery chemistry since the invention of the Li-ion battery nearly thirty years ago.

There is an example of a Li/S battery in use for flight: Sion Power makes a Li/S battery for UAVs (Unmanned Aerial Vehicles). But it is a long way from a UAV to transporting humans.

The two advances listed above could considerably increase the range and lower the cost of electric cars, make batteries more safe, and maybe even make electric VTOL planes a reality, but perhaps not soon. Our battery future is looking brighter than it has in recent times.

I am still dreaming about being able to fly over those awful freeway jams.

The author is a physicist retired from Lawrence Berkeley National Laboratory, a Fellow of the American Physical Society, and an occasional policy analyst and consultant to APS. He is especially interested in the future of renewable-energy storage and the application of electricity to our transportation future. He is also a Commissioner on the Energy Commission of the city of Berkeley, CA: one of his present issues is replacing natural gas with electricity for residential space and water heating. Fred continues his study of the Thai language in his spare time. 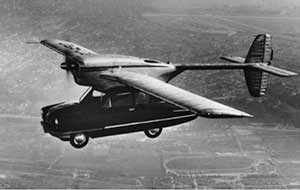 When do I get my flying car?