Science Research in Gaza in Palestine

Meeting Zher Samak, a postgraduate student from Gaza in Palestine pursuing her Ph.D. in the physics department of Cairo University in Egypt, taught me a lot about higher education in Gaza. Like most others, I was aware of their elementary and high schools but not their universities. Zher graduated from the Islamic University of Gaza (IUG) with a bachelor’s and a master’s degree in physics. Gaza has several universities, such as Al Azhar, Al Aqsa, Islamic, and Palestine Technical College, but the Islamic University of Gaza is the only research university there that offers a master’s degree in physics. The faculty members in other departments and in other universities include students in their research programs, but not at the graduate degree level yet.

Zher saved money as a schoolteacher to pursue her Ph.D. degree in physics in Cairo University, where I taught a lecture course on atomic astrophysics and plasma opacity. Her own savings was not enough and hence her parents also contributed. She came to me asking whether she could join the course after her research advisor Professor Sherbini informed her about it. I welcomed her. 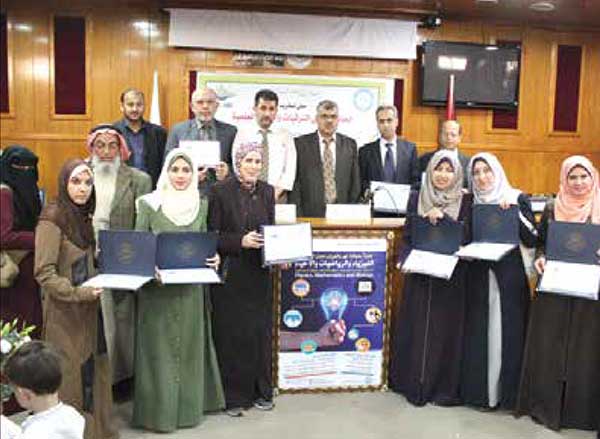 Faculty and student winners of prizes (with certificates) with the IUG President Professor Awadallah (in the middle) at the 2017 annual recognition program for education and research in STEM subjects founded by Sultana Nahar.

A tall, strong young woman in a black abaya whose way of speaking showed determination and persistence in pursuing the degree, Zher stood out as different from other students with happy faces. She lived alone far from campus and used to take the bus everyday carrying a heavy old laptop. Her laptop was the only computer unable to connect to wi-fi internet during the computational workshop on R-matrix and atomic structure codes that I was conducting. She took the final exam with a cold and a fever but did well. I offered her $300 toward purchasing a new computer, but she refused politely saying that she needed only prayer for her success. She accepted it only when I explained that it was for her sincerity and performance in the course. Through Zher I came to know more about IUG and made contact with it. I helped members in the physics department to become members of APS at no cost.

On March 14-15, 2017, IUG held its sixth International Conference on Science Development, and I was invited to be the keynote presenter in the inauguration session. Unfortunately I was not able to attend the Conference, but instead I sent my slides on "Atomic processes: From Universe to Cancer Treatment" with my Skype contact information to answer questions after the presentation. But due to a power outage in Gaza, Skype did not work, so a professor answered the questions. Participants came from the universities in Gaza, and from neighboring Arab countries of Jordan, Kuwait, Qatar, and the city of Bethlehem, and I joined remotely from the U.S. The research areas covered were in chemistry, environmental engineering, earth sciences, water and renewable/green energy, marine sciences, life and health sciences, and biotechnology, mathematics, and physics. The presentations covered interesting and modern topics titled such as "Zinc and Magnesium Levels in Osteoporosis Patients from Northern Gaza Strip" and "Dispersion Characteristics of Graphene Surface Plasmon four-layer Waveguide."

I established a recognition program in STEM (science, technology, engineering, mathematics) areas in IUG in 2015 to motivate and promote education and research in basic and applied sciences. The program gives 14 prizes, 7 to faculty members for high quality research publications and best teaching skill and 7 to students for the best academic performances in the departments of physics, biology, chemistry, mathematics, and six departments of engineering. They were distributed for the first time in April 2017 at the end of IUG's 2nd observation of the research week where various research activities were demonstrated. The winners of the prizes were also revealing. Of the faculty prizes, five went to male faculty members and one to a female faculty member who was from engineering. However, six of the seven student prizes went to female students. It was impressive to see the sincerity and devotion of the women, and I hope that such practices will also be adopted by the men.

The author is a research professor in the Department of Astronomy at The Ohio State University, Columbus, Ohio. She is a Fellow of the APS and known as the Iron Lady for extensive work on iron ions under the Opacity Project and the Iron Project. She received her Ph.D. in physics from Wayne State University, Detroit, Michigan in 1987. With A.K. Pradhan she co-authored the textbook Atomic Astrophysics and Spectroscopy (Cambridge 2011), and maintains her online database NORAD-Atomic-Data. She has been promoting STEM education and research in developing countries since 1995. 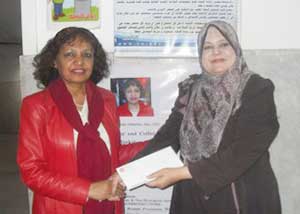 (Upper photo) : The author (left) and Zher Samak, who came from Gaza came to Cairo University for her Ph.D. in atomic physics. Samak was recognized for her performance and sincerity in the course that Dr. Nahar taught at Cairo University in 2015. (Lower photo): The 6th ICSD conference was held in Gaza during March 14-15, 2017.