NSF Grant For Women in Physics

Regularly drawing 19 million viewers each year, the comedy TV sitcom The Big Bang Theory is premiering its 11th season in late September 2017. The male foursome featured in the show — two Caltech physicists, an astrophysicist, and an aerospace engineer — all share the same "geeky intellectual" outlook on life. What about aspiring physicists, however, who don’t fit the male nerd image — are they welcome? Thanks to a $3 million grant from the National Science Foundation (NSF), researchers from Florida International University (FIU), Texas A&M University-Commerce, the American Association of Physics Teachers (AAPT), and APS will begin a multi-year project to encourage more women to overcome the negative stereotypes and enter the field of physics.

"[The Big Bang Theory] is a funny show, and the ‘nerd’ stereotypes are funny … but we need to change the ‘Big Bang Theory’ view of what a physicist or a physics student looks like," Zahra Hazari told APS News in an interview. Currently an associate professor of physics at FIU and the lead investigator of this project, her research has centered on reforming the physics learning environment to raise the participation of underrepresented groups who pursue physics, especially women.

"[Shows like these] are hugely detrimental to opening up doors for people who have never considered the field, because they don't look or act the right way," Hazari said. "... you don't have to act that way and be that way to do physics, you can be a caring and nurturing woman. My research is about mythbusting, and to [eliminate bias against] women's participation in physics."

Although the show hasn’t made major controversy, popular culture might be taking a toll on those who pursue physical science careers. Even though as many women take high school physics as men, women make up only 20 percent of the undergraduates in physics. And according to Hazari, the imbalance has historically been an issue in certain disciplines of engineering and physics; biology has a slight overrepresentation of women, and chemistry is at or around parity, she said.

"Women tend not to choose physical science careers because they don't see them as impactful .... on average, [they] tend to be interested in careers that can make a change in society, that can better our future in society, so they don't see physics as a pathway for that," Hazari explained. "We are going to show how people with physics degrees go on to work on cancer research, they work on things that can make a huge difference in the world."

While efforts are on the rise to retain female physics undergraduates — including the APS Conferences for Undergraduate Women in Physics (CUWiP) — Hazari wants to tackle the preceding step of recruitment with her upcoming research.

"We … understand the issues for women and what the critical timeframes are for intervention, but we haven't wrapped it into practice yet," Hazari said. "[My team and I] want to use [academic research] to change the face of physics, the education system, and to increase pathways and empower women in physics, rather than have all of this valuable research sit in a journal."

With the four years of NSF funding, Hazari plans to carefully field-test her program with small numbers of teachers for two years. "What we are really trying to hammer home is ‘how do we make these interventions usable for physics teachers, and how do we reach them?’ Whether you are in a rural area, or the inner city, these are materials that [we want] them to use," Hazari explained. "It's a very difficult task, but we [have] help from teachers that come from those demographic regions." If all goes as planned, there will be a nationwide rollout by 2019 with a targeted goal of reaching 16,000 educators.

"[16,000 teachers] is a daunting number," Hazari admitted. But her strategies to reach teachers far and wide includes help from APS and AAPT, who have a vast network of physics educators. "We [hope to] train regional teacher leaders who will go out and run workshops in their region, and include webinars for additional teachers throughout the country," Hazari said. "I know [our plan] is very risky, but the bigger risk is not trying anything. It's always better to try something." 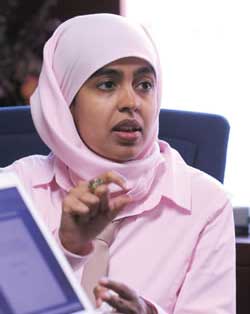