On the morning of August 17th, almost 100 physics graduate students from Mexico, the United States, Canada, and Cuba sat in a room together at the first session of the 2017 APS Canadian-American-Mexican Graduate Student Physics Conference (CAM), held in Washington D.C. Quiet anticipation filled the air as the students waited for the conference to begin, looking around at their international peers with friendly smiles, excited to meet each other and share their research and experiences in the following days. One might wonder what brought such a diverse group of students together.

Back in 1994, the Canadian Association of Physicists (CAP), APS, and Sociedad Mexicana de Física (SMF) jointly hosted the first international North American physics conference, in Cancun, Mexico, which provided a platform for physicists from all over the continent to come together for intellectual discussion, professional development, and the opportunity to form collaborations. In subsequent years, CAM was redesigned to serve graduate students exclusively. Since then, it has taken place biennially, with the previous two held in Waterloo, Canada (2013) and Oaxaca, Mexico (2015). This past August, CAM2017 embraced the theme “Transcending Boundaries." 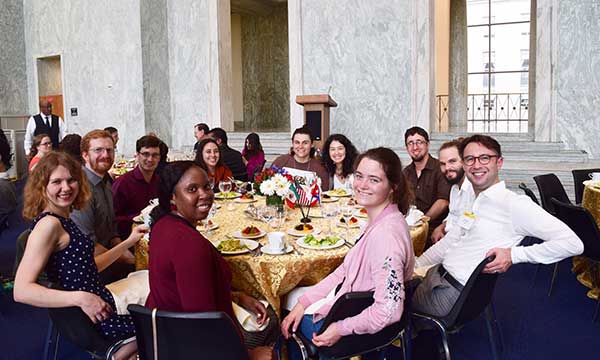 Graduate students from Canada, the U.S., Mexico, and Cuba in Washington D.C.

As the conference is largely run by and for graduate students, CAM’s unique design allows these students to give research presentations to an audience of their peers, providing a less intimidating environment than other conferences, while simultaneously challenging them to explain technical work in terms accessible by any physics graduate student. Additionally, the conference offers attendees the chance to meet people from around the continent and to learn about each other’s experiences. Hence the young scientists are able to share not only stories about life in graduate school, but also their distinct perspectives developed in different cultures. This year, in addition to attendees from Canada, U.S. and Mexico, a delegation of 15 Cuban students was invited to CAM for the first time, marking a historic moment and giving additional meaning to the theme of the conference by transcending a political boundary.

The conference kicked off with opening remarks from Matiás Moreno from SMF, Christopher Pugh of CAP, and APS CEO Kate Kirby. A plenary session featuring Eduardo Gómez García from Universidad Autónoma de San Luis Potosí, México and Melissa Franklin from Harvard University, USA, followed. The room was packed with the kind of energy one experiences at the beginning of a big journey. This energy was reciprocated by the speakers. García gave an outstanding talk explaining the importance of precision measurements and how his research group studies the weak force using laser cooled francium atoms. The talk transcended a disciplinary boundary by engaging students with backgrounds in both particle physics and quantum optics. Franklin gave a broad overview of particle physics and its future, interactively challenging the audience by asking questions like “What do you guys think about at night [if not particle physics and the universe]?” Her energy, humor, and thought-provoking questions captured the attendees’ attention that morning and set a positive tone that carried throughout the conference.

CAM’s agenda included four more plenary sessions, several graduate student poster and oral presentations, and two panels. The first panel featured professionals in physics, and the second had student panelists. While the talks and presentations promoted research discussions, the panels provided an avenue for comparing and contrasting the four countries’ academia, politics, and cultures. The first panel emphasized the value and various benefits of scientific collaborations, and all four panelists recognized that international collaboration is necessary for the success of science. Specifically, García pointed out that collaborations provide indispensable resources that enable more competitive research to take place in Mexico. María Sánchez Colina, president of the Cuban Physical Society, explained that science and collaborations in Cuba tend to be more heavily focused on biological and medical fields, and that future collaboration with the U.S. — both scientific collaborations and conferences such as CAM — could help in the development of physics research and technology in Cuba. In contrast to the serious discussions during the day, the evenings were full of lighthearted conversations at both the welcome reception and the conference banquet in the foyer of the Rayburn House Office Building on Capitol Hill. This gorgeous high-ceilinged room where legislators often meet made for a memorable experience for both the local and international attendees.

It is impossible to do the entire conference justice as CAM consisted of many great moments. Most notable, however, were those showing that the physics community is becoming more aware of societal issues. This was exemplified when Pauline Barmby, from University of Western Ontario, started her plenary talk on astrophysics by acknowledging that we were gathered on the former lands of the Native American people, setting an example for all to follow. Another interesting moment came when the graduate student panel discussed how in the United States, the topic of diversity is often focused on people of color, but that this might not necessarily be the case elsewhere. Panelist Ana Avilez-Lopez told us that indigenous people for whom Spanish is not their native language are an underrepresented group in Mexico, and they are often left behind by science. Such discussions taking place at CAM demonstrates that physicists around the continent are actively working towards the goal of a diverse and inclusive scientific community.

Another area in which academics are gaining awareness is the number of available academic jobs, or rather lack thereof. APS Careers Program Manager Crystal Bailey served on the first panel and presented statistics showing the high percentage of graduate students that are currently transcending a career boundary by working outside of academia.

Whether graduate students choose to carry on with research in academia, work in industry, or pursue careers in policy or advocacy work, the field of physics continues to thrive, and APS conferences like CAM enhance it by providing a place where young scientists can come together to learn and share their research and experiences, as well as develop personal and professional connections.

CAM 2017 was jointly funded by CAP, CAP Foundation, SNOLAB (the expansion of the Sudbury Neutrino Observatory), SMF, The National Council For Science and Technology in Mexico (CONACYT), APS, the APS Forum on Graduate Student Affairs (FGSA), the National Science Foundation, the APS Office of International Affairs, and the U.S. Liaison Committee for the International Union of Pure and Applied Physics. The international organizing committee was led by Krista Freeman, Past Chair of APS FGSA.

Midhat Farooq is a graduate student at the University of Michigan and does research in particle physics at Argonne National Laboratory. She served on the university’s physics graduate council and on the executive board of its Society for Women in Physics, and has organized outreach and professional development events. Midhat has joined the graduate student government at Michigan and has advocated for graduate student issues on Capitol Hill. She is also participating in two APS committees and working with the APS FGSA. Her goal is to pursue a career in advocacy and science policy. 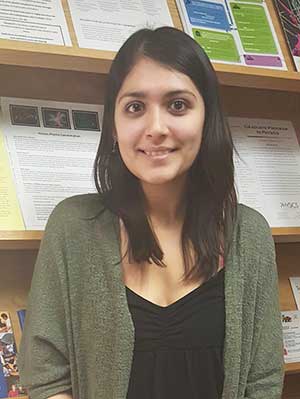