Teams report detection of neutron-star merger along with electromagnetic signals

Following closely the announcement of the 2017 Nobel Prize in Physics, the LIGO and Virgo collaborations reported on October 16 in Physical Review Letters that they have detected the coalescence of two neutron stars—objects of lower mass and much different in character from the black holes in the previously observed mergers.

Moreover, reports from about 70 ground- and space-based observatories confirm that a variety of electromagnetic signals—from gamma rays to radio waves—was detected as well. Papers on these observations were published in Astrophysical Journal Letters, Nature, Nature Astronomy, and Science.

Armed with this range of gravitational-wave and electromagnetic data, the research teams were able to confirm the origin of short gamma-ray bursts, long suspected to be the result of neutron-star mergers. The results also show nucleosynthesis in action, in particular the creation of elements heavier than iron, such as gold and platinum. 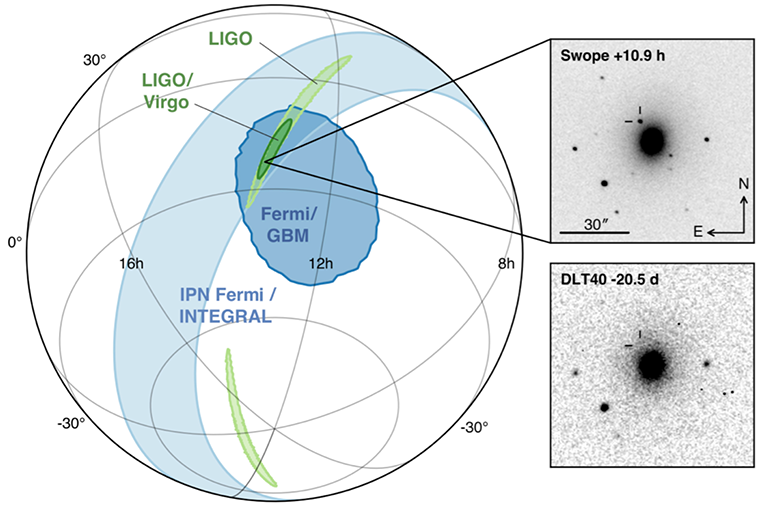 LIGO and Virgo narrowed down where the gravitational waves from a neutron star merger were coming from, and the Fermi and INTEGRAL spacecraft detected the associated gamma ray signal. The Swope telescope detected the optical signal nearly 11 hours later, whereas the object was not visible 20 days prior.

The gravitational-wave signal, denoted GW170817, was first observed by LIGO and Virgo on August 17. Researchers concluded that the inspiraling objects were in the range of 1.1 to 1.6 times the mass of the Sun, and thus were unlikely to be black holes. This mass range corresponds to that of neutron stars, typically formed in the aftermath of supernova explosions. The data indicated that the neutron-star merger took place some 130 million light years from Earth.

Black-hole mergers are expected to produce no electromagnetic signals, as photons produced could not escape the gravity of one black hole, let alone two. Neutron-star collisions, however, could yield bright flashes across the electromagnetic spectrum. And indeed, a gamma-ray burst was detected by NASA’s Fermi spacecraft and confirmed by the European Space Agency’s INTEGRAL space-borne detectors.

The coordinates for the origin of the signal corroborated those from the LIGO/Virgo data. Soon, follow-up observations by other telescopes revealed emissions at various wavelengths. These results helped identify the merger as located in galaxy NGC 4993 in the Hydra Constellation.

“This detection opens the window of a long-awaited ‘multi-messenger’ astronomy,” said Caltech’s David H. Reitze, executive director of the LIGO Laboratory, in a press statement. “It’s the first time that we’ve observed a cataclysmic astrophysical event in both gravitational waves and electromagnetic waves—our cosmic messengers. Gravitational-wave astronomy offers new opportunities to understand the properties of neutron stars in ways that just can’t be achieved with electromagnetic astronomy alone.”