Physicists Take Their Skills to the Great Outdoors

If a tree falls in the forest, Topher White will hear it. The one-time physics major has developed a technology to detect chainsaw noise from illegal logging and alert a ranger or law enforcement officer. He now runs a nonprofit, Rainforest Connection, to expand his tree-protecting devices to new places, some of them in the world’s most remote and biologically diverse regions. 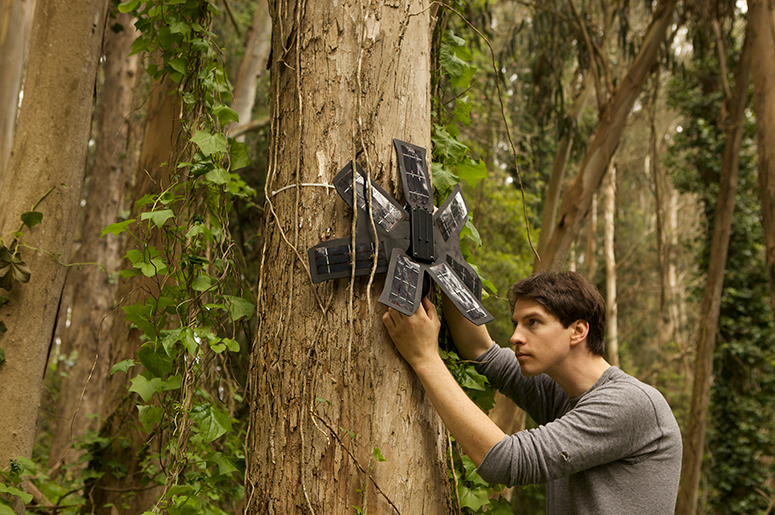 Topher White adjusts a solar array that powers a cellphone being used as a detector of illegal logging.

In 2000, when White headed to Kenyon College, a small liberal-arts school in Ohio, he thought he would major in performing arts. That changed when he discovered the joys of experimental physics in the college’s intimate, hands-on lab courses. Rebuilding the campus radio station with scavenged parts also helped instill a healthy hacker spirit.

After graduating, White returned home and cycled through a series of short-term gigs before landing a communications job at the International Tokamak Experimental Reactor (ITER) in France. He found the mission inspiring, but his DIY instincts and desire to address urgent problems such as climate change ran up against the inevitable bureaucracy of a complex multinational project.

Inspiration and restlessness struck when, on a vacation in 2011, White visited a gibbon reserve on the Indonesian island of Sumatra. Just a few minutes’ walk from where he was staying, he came across a group of men sawing up a tree; the loggers had apparently evaded several park rangers. White realized that chainsaws produce a fundamental frequency around 110 hertz and higher harmonics that can be distinguished from the forest’s background noise—mostly higher-pitched songs of birds and sounds of other animals. He returned home and programmed a cellphone to send an alert when it detected a chainsaw’s telltale frequency.

The hardest challenge turned out to be keeping the phones powered up far from electrical outlets—standard solar panels don’t work well in dense forest. So White developed a customized solar array optimized to harvest this sporadic light. The solar panel is folded into a backpack, and strapped to a tree where it can power a phone monitoring up to several square kilometers. White took his invention to the reserve in May 2012, and within a few days, the device picked up a nearby signal.

White and the reserve owner hiked over the hill and encountered several men with chainsaws nonchalantly taking a smoking break. It turned out they actually knew the reserve owner, and after explaining how they conducted their illicit activity, they promised not to come back.

White had by this time moved back to San Francisco to join a tech startup, but the opportunity to help stop illegal logging, a global scourge that releases billions of tons of carbons annually, proved more enticing. So White quit his job, pulled in $167,000 on the crowd-sourcing platform Kickstarter, and launched Rainforest Connection. The nonprofit now has seven full-time employees and an army of volunteers, and operates in Cameroon, Ecuador, Peru, Nicaragua, Romania, and Brazil. In total, Rainforest Connection has 48 devices deployed, monitoring more than 1,500 square kilometers of forest.

White hopes that’s just the beginning. Thanks to the rapid global spread of smartphones and cell service to even remote areas, he thinks he’s just two-to-three years away from his goal. “The software itself should be the magical part; the hardware I want to be more-or-less throw-away,” he says. “I want to make automated conservation as easy as downloading an app.”

Wiring the woods for science

Andrew Nottingham’s last few years as a postdoc involved wiring up electronics and sensors to generate and collect data. When a shoddy soldering job blew up part of his experiment, he spent nearly a year rebuilding it. 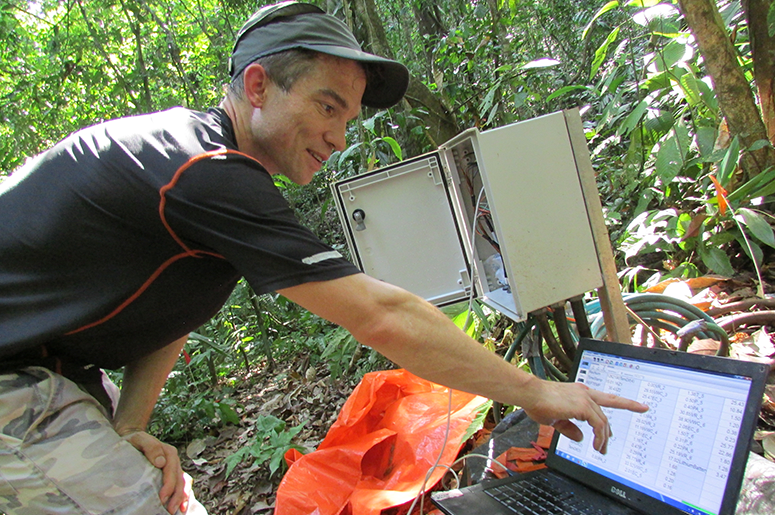 It sounds like life in a typical physics lab, and indeed Nottingham drew heavily on his physics education at Nottingham Trent University (no relation) in the UK. But his “lab” is Barro Colorado Island, a research facility of the Smithsonian Tropical Research Institute in Panama and perhaps the world’s best-studied tropical rainforest.

Nottingham wants to know what happens when tropical forest soil is artificially warmed. It’s an experiment with big implications. Soils hold vast amounts of carbon, and scientists believe that more and more of this carbon will escape to the atmosphere as the climate warms, further accelerating climate change. But all experiments to date have been done in temperate or boreal regions. A single result from the tropics could go a long way toward making climate models’ predictions more precise.

Nottingham’s path to soil research pioneer was far from linear. “I had an adolescent, romanticized notion of wanting to know how the world works, and physics always seemed like the purest description of nature,” he says. He entered college interested in theoretical questions, but a research project near the end of his undergraduate years showed how applied physical science could help address environmental problems.

Inspired, he enrolled in an environmental science master’s program tailored for quantitative scientists. His physics background gave him the tools and the confidence he needed to dive into unfamiliar subjects such as evolution, Nottingham says. “I felt like my background in physics had given me the capacity to go into something blindly and learn about it.”

For his Ph.D. work at the University of Cambridge, he studied how bacteria affect carbon movement through tropical forest soils. That led to his current position, split between the Smithsonian and the University of Edinburgh in Scotland, where he focuses on his soil-warming experiment. If tropical soils, which contain around a third of global soil carbon, do the same, it could dramatically accelerate climate change.

Nottingham finally switched on his experiment in November 2016. Since then, much to his relief, he’s been able to transition from engineering to research mode, and he hopes to have results within a year. “We have floods of data, it’s now a deluge,” he says. “Having invested so much time in building this experiment, it’s become exciting, seeing returns on my investment.”

The final paragraph of Charles Darwin’s Origin of Species famously begins: “It is interesting to contemplate an entangled bank, clothed with many plants of many kinds, with birds singing on the bushes, with various insects flitting about, and with worms crawling through the damp earth, and to reflect that these elaborately constructed forms, so different from each other, and dependent upon each other in so complex a manner, have all been produced by laws acting around us.” 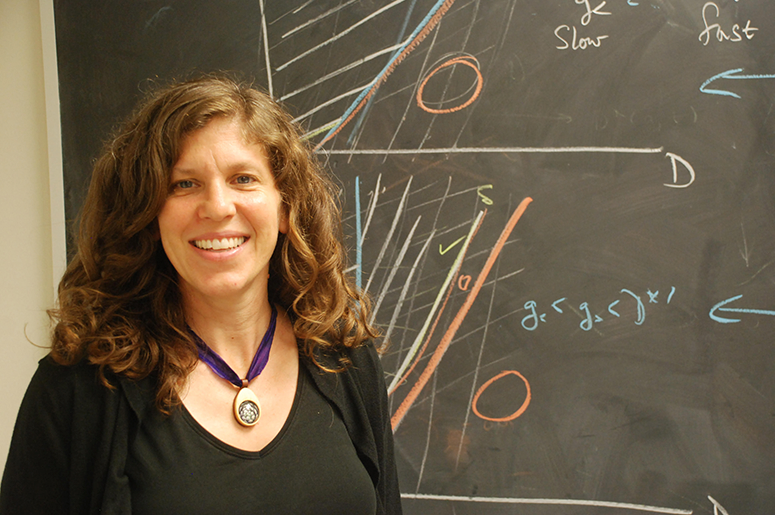 More than 150 years after Darwin published his magnum opus, however, far-reaching quantitative explanations of how ecosystems are structured and species coexist remain elusive. Annette Ostling, a professor in the University of Michigan’s Department of Ecology and Evolutionary Biology, hopes to change that.

Ostling grew up enjoying math and physics, but when she showed up at Columbia University as an undergraduate, she thought she wanted to be a doctor. Still, she took calculus-based physics in her first year—a fortuitous decision. “After the first exam, one of my friends in the class turned around and told me, did you notice you’re the only woman in the class?’” she recalls. “That was a little motivation to stick with it and choose it as a major.”

Ostling then went to the University of Illinois at Urbana-Champaign for a physics master’s degree. But it was her Ph.D. work with John Harte, a physicist-turned-ecologist at the University of California, Berkeley that truly inspired her. Working with Harte gave Ostling an opportunity to apply her quantitative skills to data from the natural world. “He was a fabulous advisor,” she says. “That was a key thing that made the switch successful into a different field.”

Ostling soon discovered that most ecologists take a different scientific approach from that typically used by physicists. Whereas physicists tend to seek general principles, ecologists have largely built their discipline around studies of specific ecosystems and species interactions. Harte is one of the few physicists who has attempted to bridge this gap, using statistical physics and information theory to predict how many competing species can live together in a given environment.

Ostling has taken up a similar challenge, focusing on putting leading ecological theories of biodiversity on a more quantitative footing. One leading ecological theory is known as niche theory—essentially, that species specialize in ways that gives them micro-advantages. More recently, an alternative, neutral theory, has gained in stature; it argues that biodiversity results from random environmental fluctuations that maintain a balance among species in an ecosystem.

Ostling believes that perhaps neutral theory sets the overall ecological stage, and niche theory can explain finer details of species’ ability to coexist in particular environments. But whereas physicists can quickly generate massive quantities of data in experiments, ecologists seeking a similar level of statistical certainty often need to painstakingly measure ecosystems for years or decades—which can stretch the patience of funders and thesis committees.

This has brought Ostling to the forest—specifically, the rainforest of Barro Colorado Island, where Nottingham does his soil studies. In a different part of the forest, researchers have measured the diameter and height of every tree in a 50-hectare (almost 125-acre) plot every five years since 1980, creating an exceptionally long and complete dataset. Ostling is now using these data to test predictions, though she notes that her theories are not forest specific, and could apply to other ecosystems.

In this technological, numerical age, physics-trained scientists with an interest in the natural world will find plenty of opportunities in ecology, Ostling says. “I think it is becoming increasingly quantitative, mostly for the good,” she says. “There are a lot of things that we don’t understand in ecology yet, and mathematical approaches, including some from physics, can be really useful for figuring it out.”