A Physicist Pushes for Interstellar Travel

There’s a lot to explore within a couple billion kilometers of the Sun—moons, planets, asteroids—but some scientists like Les Johnson are already looking beyond our solar system. Johnson, who holds degrees in chemistry and physics, is a researcher at the NASA George C. Marshall Space Flight Center in Huntsville, Alabama. He’s investigating how a new kind of fuel-less propulsion known as solar sail technology might one day be used to send instruments to faraway worlds orbiting other stars. Johnson is also a published science fiction author, and his day job at NASA is often inspiration for his novels.

Traditional propulsion systems like rockets all suffer from the same limitation: they have to carry their own heavy stockpiles of fuel. On the other hand, solar sails and their payloads can be much, much lighter because the sails draw on energy from the Sun rather than from an onboard fuel source. Solar sails are also cheaper and less dependent on precise launch windows than traditional rockets, Johnson notes. 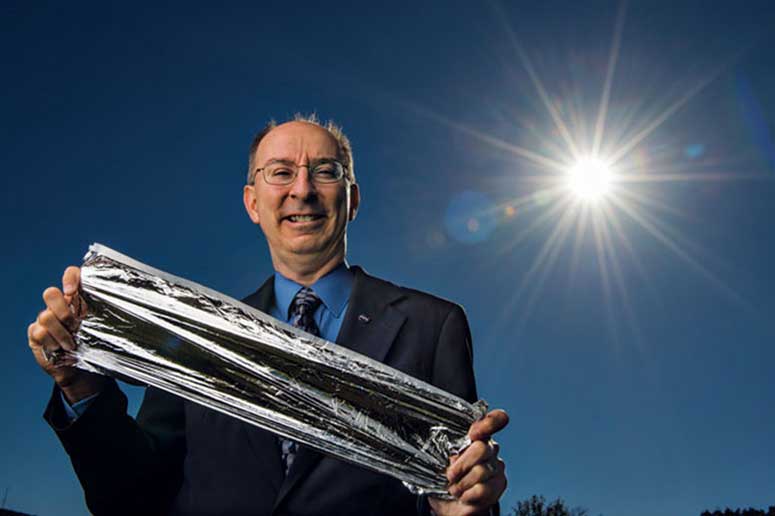 When large sheets of lightweight, durable materials—like CP1, a proprietary material developed by NASA that resembles a non-sticky version of Saran Wrap©—are unfurled in space and pointed toward the Sun, they act like sails that reflect sunlight. Think about how a sailboat works but replace the wind with sunlight, says Johnson. These sails effectively receive a push from each photon that reflects from them. Over time, all of those tiny pushes acting together accelerate whatever payload is attached to the solar sail, and the direction of movement can be controlled by adjusting the angle of reflection.

As Solar Sail Principal Investigator for NASA’s Near Earth Asteroid Scout project, Johnson is currently working on developing and testing a solar sail that is slated to launch in 2019, the first interplanetary solar sail mission led by the United States (Japan launched a mission in 2010). Its destination will be an asteroid within the solar system known as 1991VG, thought to be a rocky world about 50 meters across circling the Sun in an Earth-like orbit. There’s been a lot of interest in better understanding the composition of nearby asteroids. For many of them we don’t know much more beyond their existence, says Johnson. "Unless there’s a low-cost reconnaissance mission beforehand, it’d be too risky to send people in," he says.

That’s where NEA Scout comes in—the mission is built around a square of solar sail 9 meters on a side, roughly the length of a school bus. The sail, made of 2.5-micron-thick CP1, is coated in aluminum to increase reflectivity and will be attached to a camera payload designed to fly within a kilometer of 1991VG. By imaging over 85% of the surface of the asteroid in unprecedented detail and sending the data back to Earth, researchers can estimate 1991VG’s spin rate and examine whether it has a halo of dust surrounding it. These observations will help scientists decide whether 1991VG would be a safe place for a future human visit.

When Johnson isn’t researching solar sails, he’s writing about them and other new space technologies. As he started his scientific career, Johnson was often asked to give talks on space and science at science fiction conventions. "I was often told ‘you need to write these ideas down’," he says. In the early 2000s, he met Gregory Matloff, an astronomer who had written a few popular science books. The two researchers began to talk about writing a book together, which ultimately became "Living off the Land in Space," published in 2007. This book is about how to use the resources of space to support exploration beyond Earth, says Johnson. He’s currently working on "Mission to Methone," a thriller set in the future about the fictional Space Resources Corporation finding an abandoned spaceship when surveying asteroids for possible mining.

Johnson is looking forward to testing solar sail technology with NEA Scout, and he’s hopeful that solar sails will one day carry scientific instruments to worlds beyond our solar system. "I would be thrilled to have pictures of any solar system with a potentially habitable planet," he says.

The author is a freelance writer based in Portland, Oregon.