A conversation with physicist-turned-science-communicator, Dianna Cowern

During the 2017 APS March Meeting, APS News sat down with Dianna Cowern (aka Physics Girl) to find out what it takes to be a physics YouTube star. She received a bachelor’s in physics from the Massachusetts Institute of Technology, but now hosts a PBS Digital Studios Channel, which features do-it-yourself experiments and presentations on space and astronomy topics. This interview has been edited for length and clarity. 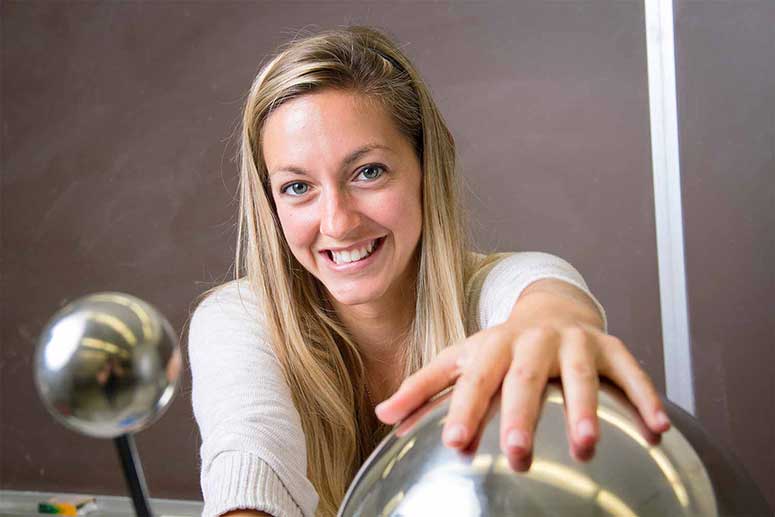 How did you come up with the idea of Physics Girl?

I started my channel in 2012, but it took about two years to really get it going and to actually put videos up. I had maybe three in the first year? ... They were silly skit videos more than physics-related and then it morphed into a science channel. Now, I am sponsored by PBS Digital Studios—I signed in August 2016. It was serendipitous, like a lot of things in life are. I won The Flame Challenge, which was a science video challenge, while I was working at the University of California, San Diego (USCD), doing outreach with their physics department. One of the board members at PBS was a UCSD alum and saw an article about my award, and they wanted to put me in touch with PBS.

Are you a one-woman operation, or does your channel have multiple players?

I have five people but they are less than full time … sometimes I am a one woman team! About a year and a half ago, I was working by myself. First, I hired an editor, and I have one writer who does research. Sometimes we work on it together—it changes for every video.

Did you always envision yourself in physics, particularly science communication?

I started out loving math, but then I realized physics was just applied math … I became interested in high school, and then in college I decided I wanted to study it. I tried neuroscience, mechanical engineering, and I even took science writing classes to see if I wanted to do science communication. I decided that I really loved physics, and I wanted to do science communications. Finally I was like, "Ok, this is gonna happen…", and that's when I started my channel.

Are your video topics your own ideas, or mainly suggestions from viewers?

People do suggest ideas. For example, I grew up in Hawaii and people suggested the formation of Hawaii, so I did a video on that. We found some interesting things, but sometimes I run out of ideas … a lot of the videos are random because I’m constantly thinking about Physics Girl … it’s in the back of my mind all the time. If I’m talking with someone about something science-related, I think to myself, "that might make an interesting video"! I also used to live with three physics grad students, and they constantly talked about riddles or questions, which serve as starter topics … like "Why are plants not black", but it can also mean "Why are plants always green"?

How do you interact with your audience over the internet?

You filter the comments, and you filter what you listen to or read. I have actual filters of what can or can’t be posted on my comments, to remove the "less acceptable words" ... I also can't read every comment, there are over 100 a day. I try to stay on top of Twitter though, that's where I interact with my fans the most.

Have any of your viewers spotted mistakes in your videos before?

Sometimes I get some really great feedback … I do get things wrong from time to time. I have an animator, and things can get a bit lost in translation. But sometimes it’s just me, I’ll mess up or miss something that looks wrong in the video. So I'll watch the comments for the first couple of hours to double check. I've had to take it down a few times … you have to look at all the details, but as Physics Girl, I can't have that kind of error! My audience is ready to point out my errors … but in a critical helpful way.

Speaking of audience, do you have any idea who your biggest fans are?

My audience in general is 83% men. I’ve asked a lot of other physics channels to see if it’s the same, which it is, and biology channels usually have more women. I think that reflects the number of people that are studying those subjects. But then looking at age groups, a lot more girls are interested at a young age. Girls are losing interest as they get older, it seems.

Do those numbers make you want to change your channel in any way?

I think it inspires me to start a new channel, I want to aim it at younger women to retain their interest. I might get better demographic data, but doing Physics Girl has been a really fun learning experience. I’m making videos on topics that I’m interested in, not what I was learning in school at age 13… I’ve been thinking about it for a while, but I’m not sure it will happen in the near future.

For someone who wants to stay in the sciences but become involved in the communications aspects, what advice would you give?

As with any profession you have to practice … I can’t emphasize enough how important that is. I have practiced giving talks, writing scripts, working with my camera, and now it’s part of my job. I got to learn it on the job, which is awesome, and I’m really lucky. But with just a communications degree, I don’t think I would be ready to do that. I think a lot of the skills weren't natural to me, but the passion and science was ... like I said, I’m much better at math, but even I had to practice speaking clearly to engage my viewers.