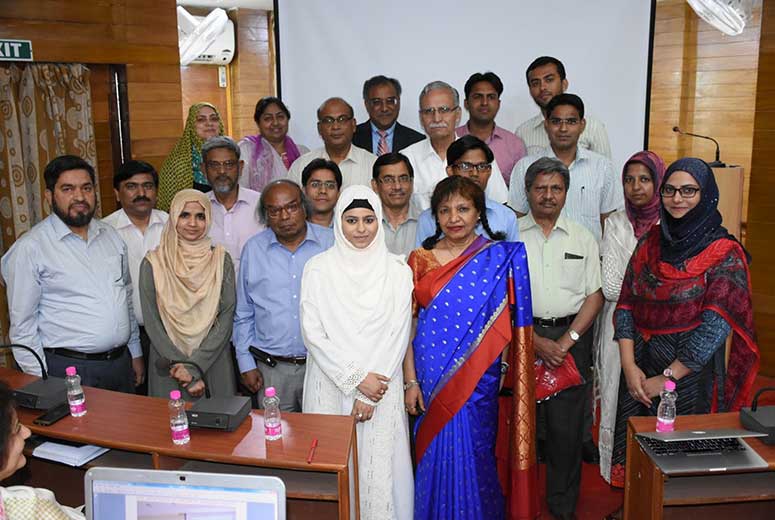 OSU and AMU members at the symposium held at AMU that formalized the structure of the STEM ER center.

The center is the culmination of a five-year partnership of OSU with AMU under the Obama-Singh (now Indo-U.S.) 21st Century Knowledge Initiative award (2013-2017) to support faculty training of Indian postgraduate students in STEM disciplines. For the project, OSU has developed a unique two-year dual degree master’s in education program that trains Indian students to acquire world-class teaching skills at the undergraduate level (in contrast to high school) and carry out a research project with an OSU advisor in his or her discipline that constitutes a chapter in a Ph.D. thesis.

Such research experience is of crucial importance so that the student can begin long-term collaboration with colleagues in the U.S. and initiate and lead projects in India. India needs to train at least 300,000 faculty members for existing and planned institutions of higher education for about 150 million students.

OSU has made a considerable contribution to the project. With its support, eight Ph.D. students of AMU from the departments of physics, chemistry, biochemistry, biotechnology, nanotechnology, mathematics, and zoology were trained at OSU during 2014-2017. Due to lack of funds, only four of them would have been able to enroll in STEM education classes.

The project founded a STEM ER center in 2013 to carry out various activities of the program under the Knowledge Initiative award. The center conducted online interviews and distance learning classes, organized an international conference at STEM ER in 2016, and collaborated on two nanotechnology conferences, Aligarh Nano IV and V.

Anil Pradhan and I founded the center, from the initial concept to securing the physical space at AMU with the support of the AMU administration led by the past Vice Chancellor Zameer Uddin Shah. In April 2017, the center was formalized with legal and financial structures that can bring funds to (i) continue the program on STEM education and research for the postgraduate students and extend it nationally to enroll students from other Indian institutions and (ii) carry out outreach STEM activities for underprivileged school students, for which we have now received funding.

The STEM ER center is now in operation and it has been named after the Indian scientist A. P. J. Abdul Kalam, who later served as a President of India. Activity is underway for a team of OSU-trained students to build an advanced STEM ER structure at the Jahangirabad Institute of Technology in Gorakhpur with largely undergraduate students.

For the outreach component, I have proposed the "Women in STEM Roadshow" program of the US-India mission, which has received a grant from the U.S. Department of State. We will be holding nine workshops (in Aligarh, Delhi, Hyderabad, Kolkata, Kurnool, and Patna) with year-long follow-up activities to encourage and help female college students study STEM fields in the U.S. and in India.

Sultana Nahar is professor of astronomy at The Ohio State University, co-director for the Research and Liaison Office of the STEM ER Center, and adjunct professor of physics at AMU.