One year into a presidential administration that has by turns ignored, alienated, and defunded scientists, one scientific community may have cause to celebrate: physicists in quantum information science. In mid-December, Jacob Taylor, a physicist at the National Institute of Standards and Technology (NIST), took the job of assistant director for quantum information science in the White House Office of Science and Technology Policy (OSTP).

Though OSTP has had quantum physics experts on staff in the past, Taylor’s appointment is the first position dedicated solely to quantum information, a field that many scientists believe could revolutionize computing, communication, and cryptography.

"It’s very heartening to hear that Jake is taking this position," says Steve Rolston, a physicist at the University of Maryland, College Park and former director of the Joint Quantum Institute, a partnership between the university and NIST. "It means someone in the administration still thinks this is a good idea." 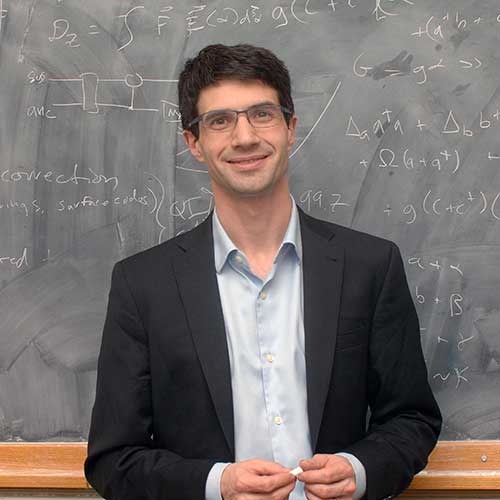 OSTP, formed in 1976 by an act of Congress, has waxed and waned over the decades. Under President Obama, it swelled to a staff of more than 100, who advised the administration on major policy matters from the response to the Ebola outbreak to efforts to rein in greenhouse gases. And under Obama, OSTP was led by a scientist, John Holdren, with both physics and engineering expertise.

But OSTP’s ranks have thinned dramatically under President Trump, with staffing levels less than half of what they were under Obama. (The office’s bare-bones website does not include a current staff list or organizational chart, but a spokesperson said the office currently employs 50 people.)

Not all has been quiet on the science front, however. In August, OSTP’s deputy chief technology officer Michael Kratsios and Office of Management and Budget director Mick Mulvaney released a policy memo highlighting quantum computing as one of several emerging technologies they see as key to "American prosperity." Taylor will help OSTP ensure the government’s investments—some $200 million to $250 million per year spread across more than a half-dozen agencies, according to various estimates—are guided by "smart federal policy," Kratsios says. "Jake’s experience at NIST and work with top QIS [quantum information science] research institutions will help with the important inter-agency coordination and policy alignment that OSTP manages."

Taylor, a theorist whose research spans both basic and applied physics, has a track record of bringing together disparate sectors of the quantum research universe. A NIST symposium he co-led in October explored how U.S. agencies can work with tech giants like Google and IBM and with smaller startups to build a quantum industry. And he spearheaded the 2014 founding of a Joint Center for Quantum Information and Computer Science, a partnership between NIST and Maryland intended to accelerate the development of quantum computer science as a research field.

"Jake’s a wonderful ambassador," says Chris Monroe, a physicist at Maryland and cofounder of ionQ, a quantum computing startup based in College Park. "He can speak to any audience about the potential of quantum." Monroe also supports an increased governmental role in quantum research. At an October House Science Committee hearing, he encouraged Congress to fund a "National Quantum Initiative" that would substantially ramp up federal spending; the concept recently gained an endorsement from Walter Copan, who was confirmed as NIST director in October. Having a quantum expert in the White House "is not a bad thing" for advancing this agenda, Monroe says.

Agency representatives also applaud OSTP’s addition of quantum expertise. "The level of federal investment is now getting large enough that some active form of interagency collaboration and coordination is really important," says Steve Binkley, deputy director for science programs in the Department of Energy’s Office of Science, which funds quantum research at several national laboratories in hopes it could help discover new materials and address basic physics questions.

Carl Williams, a deputy director at NIST who worked at OSTP during the Bush and Obama administrations, adds that the office could help in "managing the hype" around quantum information. The technology is often described as a game-changer, but both the scope of its most important applications and the size of the commercial market are unclear.

Large investments by other countries make the need for high-level coordination more urgent, adds Jason Matheny, director of the Intelligence Advanced Research Projects Activity, which funds quantum computing research with cryptography and machine learning applications. Recent reports suggest that China may be spending up to $10 billion to build a new quantum research center, and the European Union has announced a 10-year, $1-billion "flagship" program in quantum technology. While the U.S. currently holds a lead in developing quantum technology, "I think our advantage is fragile," Matheny says.

Taylor’s hire "is a good sign, particularly given the importance of quantum computing and quantum communications, and how aggressive China has been in increasing their investment in quantum technologies," agrees Tom Kalil, former deputy director of OSTP in the Obama administration. But he notes a discrepancy with Trump’s 2018 budget proposal, which would have cut U.S. research funding by around 17%, including at agencies that fund quantum information research. "The real question is whether the Administration will follow through with increased funding."

Taylor’s position is a two-year rotation, and he will continue to manage his research group at NIST on a part-time basis. He says he doesn’t yet have a specific agenda at OSTP, and declined to explicitly support a federal quantum initiative. But he hopes to help quantum information make the leap from university and government labs to a commercial industry. "It’s a transformative time for the field," he says. "There are opportunities to do wonderful things, and there are opportunities for failures as well. My job to make certain the wonderful things happen."

And he invites physicists and others to tell him how they think the government can help push quantum information science forward. "A large part of what I’m doing in the next few months is listening."

The author is a freelance science writer based in Mt. Rainier, Maryland.